Only 5% stories in regional media in the Eastern and Southern Ukraine are devoted to the topic of Joint Forces Operation, which is twice less than last year. All the while, a third part of these publications contain statistics.

These are the findings of the monitoring held by the NGO "Institute of Mass Information" in May 2020 in the regional media of eight south-eastern regions of Ukraine (Zaporizhzhya, Mykolaiv, Odessa, Kherson, Dnipro, Kharkiv, Luhansk and Donetsk regions) *.

At the same time, the study showed that the mass media in these regions have fundamentally different JFO content in terms of quantity. Thus, the regional media of Donetsk region have 18.5% (for comparison: last year - 32%) of publications dealing with this topic, mass media of Luhansk region have 19% (last year - 29.5%) of the total number of stories.

Therefore, according to the study, in Kherson, Zaporizhzhya and Odesa regions, there were almost no materials on JFO (only one news on JFO per 500 news items). For comparison: last year in Zaporizhzhya and Kherson regions 5.5 and 5% stories were devoted to the topic of JFO, respectively, in Odesa region there was 1.5%. 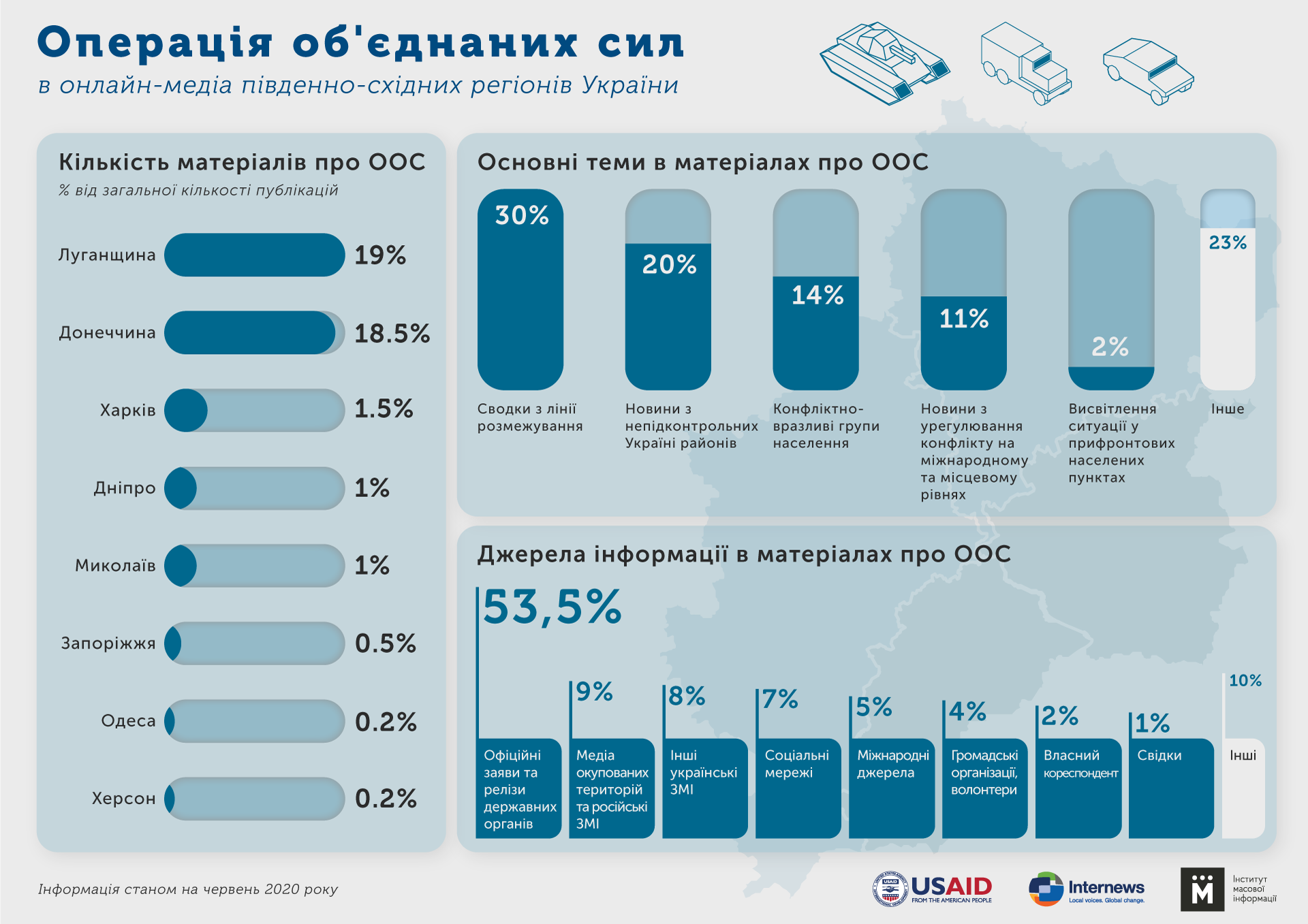 Coverage of the Donbas conflict settlement has also decreased, from 16% last year to 11% in May 2020.

According to the study, as compared to last year, the sources of information speaking of developments in zone of JFO have changed significantly. Thus, the main source of information on JFO as of May 2020 were official sources (53.5%). For comparison: last year, 38% of sources in the materials on JFO were official.

The amount of information from other Ukraine mass media dropped significantly - from 20.5 to 8%. At the same time, the number of materials in which the media of the occupied territories and the Russian mass media were the source of information, has got increased (from 7.5 to 9%). IMI experts remind that these media have a low level of reliability and use fakes and manipulations, so they are not recommended for use as a source of information.

Another 7% of materials source of information are social networks (which is less than last year, when this category accounted for 11.5%).

According to the study, the regional media has halved the news JFO from their own correspondents (falling from 4.5% in August last year to 2% in May 2020).

5% of the information on JFO came from international sources, such as the OSCE mission (roughly equal to 5.5% last year).

* The analysis was conducted in the online media of the south-eastern regions of Ukraine: Kharkiv, Odessa, Dnipro, Kherson, Mykolaiv, Zaporizhzhya, Donetsk and Luhansk regions (controlled by Ukraine). The five most rated online media in each region were monitored. The total sample was 3800 materials.