Russian "newspeak": how pro-Kremlin media are changing the language to benefit themselves 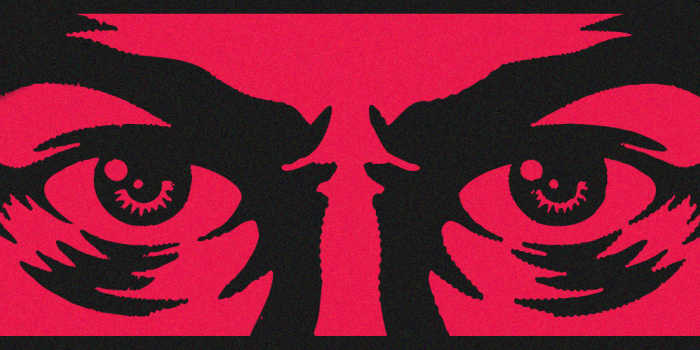 Putin's social experiment is pushing Russia closer and closer to being a dystopia. One of the Kremlin regime's main features is its information policy, which has turned into full-blown propaganda. Under the guise of mass information, Russian citizens are being subjected to psychological conditioning that is altering their perceptions.

After the start of Russia's full-scale invasion of Ukrainian territory, the Kremlin journalists decided to go even further and started using new terms, or replacing the old ones that were not beneficial to them, to amplify this psychological influence. This word choice strategy is reminiscent of the fictional language created by British writer George Orwell in his dystopian novel "1984", called "newspeak".

Russian pro-Kremlin media has created their own version of the Orwellian "newspeak".

We analyzed the Russian media and found some examples of the use of such distorted wording.

The most typical and well-known example of misleading choice of words is that in Russia, the invasion and the Russian-Ukrainian war are being stubbornly dubbed "the special operation".

Most often such "newspeak" is being employed while covering Russia's battlefield failures. This applies to both military losses and to the sanctions-induced problems of the Russian economy.

The word "explosion" has been replaced by a more neutral word "pop" in the Russian media. This applies to explosions caused by mundane things, such as gas—

—as well as to explosions that have to with the hostilities, such as the explosions in Crimea:

The Russian military's retreat brought on by the UAF's successful counteroffensive around Izum is dubbed "regrouping" in the Russian media.

Russian media avoid words like "counteroffensive". If the Russian mass media only ever use this word in parentheses, thus trying to frame it as illegitimate. Mostly, Russian journalists call the UAF counteroffensive a "breakthrough attempt."

One of the Kremlin's main propagandists, Vladimir Soloviev, has introduced an interesting word into his vocabulary. Trying to downplay the importance of the cities liberated by the Ukrainian military, he calls them "settlements", even if those cities are district centers. "Fabryka Novyn" reported this on their channel. 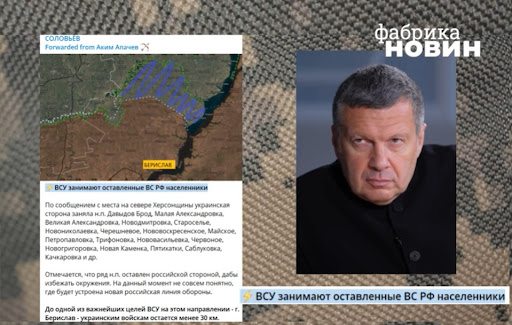 Instead, in order to exaggerate the importance of their own troops, the Russian media constantly call the Russian army "allied forces".

This creates a completely distorted impression of an entire group of allied countries, united by shared views, fighting against Ukraine.

Following the mobilization announced by Putin, which caused nearly the first internal upheaval in Russia since the beginning of the full-scale invasion, Kremlin journalists have started using the phrase "partial mobilization." It is obvious that both the Russian authorities and media are trying to soothe the anxiety among the people, despite the fact that men are being mobilized almost indiscriminately — which the Russian mass media have notably started talking about, too. It is inappropriate to use the word "partial" with regards to Russian mobilization, as it is the word that dictator Putin employs to reduce social tensions, and it does not reflect reality.

The war is not the only thing that Russian mass media are covering through the use of words that do not reflect reality. This trend is also widespread when it comes to covering economic issues, and serves the Russian state agenda all the same.

For example, a relatively new economy-related term was introduced into the Russian propaganda vocabulary back in 2014, following the sanctions against Russia brought on by the annexation of Crimea. This is the term "import substitution".

Pro-state journalists rarely report on Russia's economic decline. But whenever they do write about it, they use benign words. For example, "profitability decline" is replaced with "negative profitability", and "decreasing dynamics" with "negative dynamics".

Russian media representatives also use such vague formulations while asking questions during interviews.

As Texty writes, these specific words are prescribed by the Kremlin manuals that are issued to the state media; Texty cites Russian journalist Masha Borzunova, who published the contents of the manual received by Russian holding News Media, which explains how the holding's structures should cover the war in Ukraine and its consequences.

The document is called "For Mass Media and Commentators (Recommendations for Covering the 25.02 Events)" and is divided into four sections: "On the operation", "The West and NATO", "Society", and "Sanctions".

The propagandists primarily aim to reduce the social tension caused by the government's actions and the society's negative attitude towards these actions.

Anthropologist Aleksandra Arkhipova says this in her interview to "Bumaga":

"State representatives, governors, officials, federal journalists are using an extensive set of reality-changing words – a newspeak. It meddles not with the meanings, but with the connotations (associations that arise around the word). For example, instead of saying 'explosion', they say 'a loud sound' or 'a pop' so as not to scare people, because 'explosion' is associated with catastrophe, with people dying, but the word 'pop' is not. The entire world calls the cities taken by the Russian army 'occupied,' but federal journalists are calling them 'liberated'. The connotation is completely different!"

For his part, Roman Leibov, philologist and professor at the University of Tartu, notes that they are not just using milder words, but substitute the notions completely: "Like Orwell's newspeak, the Kremlin media not only smooth out the sharp corners, but also replace words with their opposites: the occupied territories of Ukraine are being called nothing but 'liberated'. Ukrainian citizens are not deported from the supposedly 'liberated' lands, but 'evacuated' to the territory of Russia. Doubtful attitude towards the war or criticizing it is called 'discrediting the army' in modern Russia."