The main customer of jeansa in the online media for the second quarter in a row in 2020 is the party "Opposition Platform - For Life". It accounts for an average of 31% of news items with signs of ordering, while all other political forces together had 12% of news items of such sort.

These are the findings of a study by the  NGO "Institute of Mass Media", conducted in March 2020 in 20 online media, the full sample was more than 22 thousand news *. 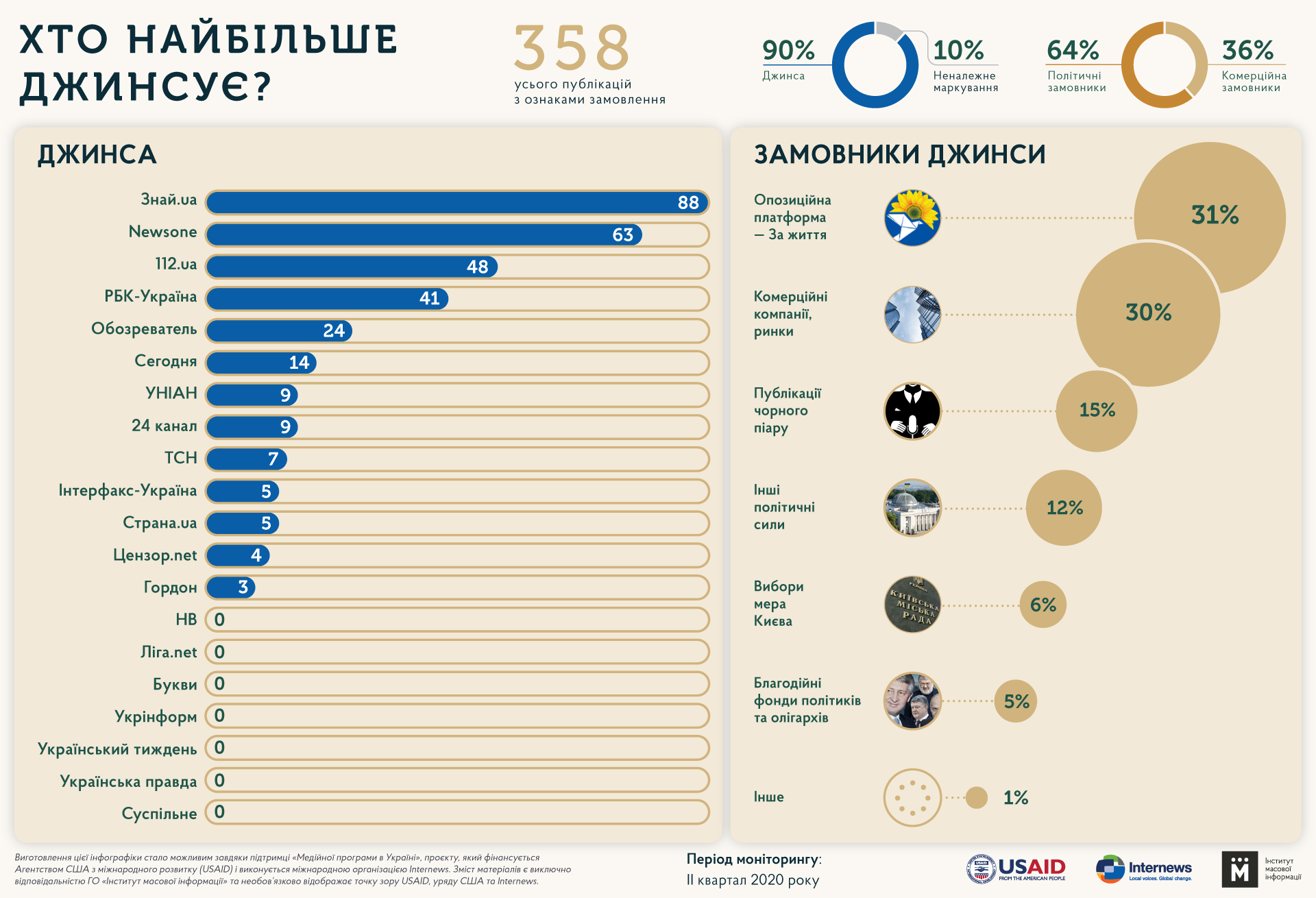 At the second position for main customers of jeansa in online media were found out to be commercial companies, which accounted for 30% of such stories. Compared to the previous monitoring period, the number of ordered media materials from commercial companies decreased by 2%.

At the third position were materials with anti-PR or smear campaigns targeting certain politicians or commercial companies, there were quite a lot - 15% of the total number of materials with signs of the order. IMI experts recorded "anti-news" targeting the politicians Vitaliy Klitschko, Mykola Tyshchenko, Andriy Herus, Andriy Sadovy, NABU Director Artem Sytnyk and others.

During the monitoring period, the ratio of political and commercial jeansa was 64% and 36%, respectively.

No jeansa were found on the Liga, Ukrinform, Ukrainsky Tyzhden, Ukrainska Pravda, Novoe Vremya, Bukvy, and Suspilne sites, but some of these sites incorrectly labeled advertisements. .

In total, 90% of the news items with sogns of being ordered were jeansa, and only 10% were conventionally labeled as advertising with a wide range of one’s own tags the online media used. Such marks do not comply with Ukrainian legislation, so these materials are classified as improperly marked.

This analysis is based on the results of monitoring conducted on May 25-29, 2020 in 20 popular Internet media: "Obozrevatel", "Znay.ua", 24 Kanal, "Gordon", "Ukrainska Pravda", "Novoe Vremya", UNIAN, "Segodnya", TSN, 112.ua, NewsOne, RBC.ua, "Liga", "Ukrainsky Tyzhden”, Interfax, "Strana", "Censor", "Suspilne", "Bukvy". The sample covers all news in a row that came out on the sites during the above-mentioned period (more than 22 thousand news).