The Censor website, with a rate of 94% of materials with no violations of professional standards, took the second place in the IMI rating.

The third position was shared by the sites " Gordon " and " RBC-Ukraine" .

The worst indicators of compliance with professional standards are shown by the “Politeka” website , where only 20% of the pieces did not contain gross violations of the basic standards of professional journalism. 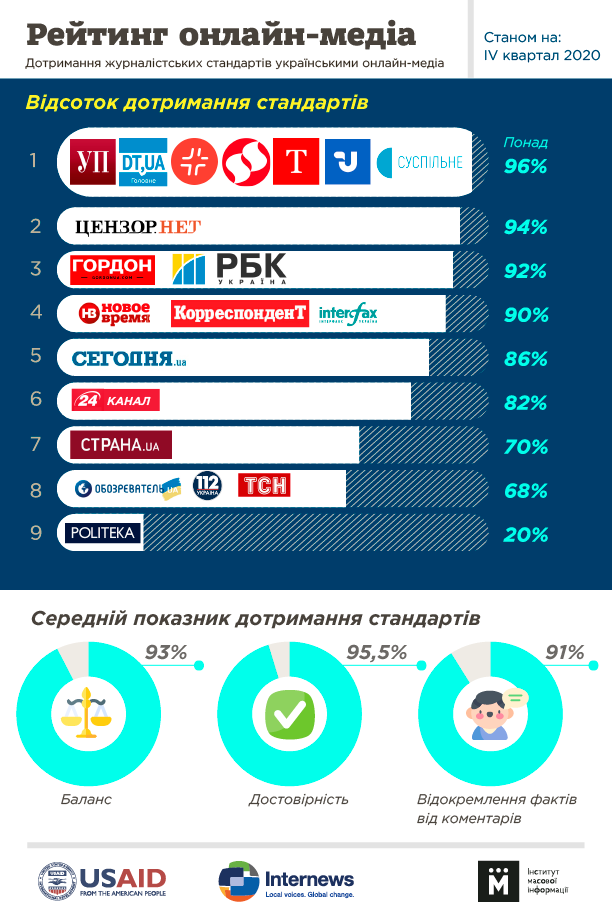 Balance of opinions and points of view

Adherence to the standard of balance of opinions and points of view has improved somewhat: from 90% in the third quarter of 2020 to 93% in the fourth. IMI experts explained this improvement by decrease in quantity of unmarked political campaigning in mass media after the local elections. At the same time, in this monitoring the experts did not take into account advertising or propaganda pieces, which were clearly marked for the audience, albeit in violation of the current legislation on advertising.

No violations of this standard were seen on the sites: "Ukrainska Pravda", "Ukrainsky Tyzhden”, "Bukvy", "Suspilne".

The highest number of unbalanced news came out on the sites of "Politeka" and "Obozrevatel".

Compared to the previous monitoring period, the credibility standard improved by 4.5%. On average, 95.5% of the news items did not contain violations of this standard.

No violations of this standard were recorded on the websites of “Dzerkalo Tyzhnya”, “Ukrainska Pravda”, Liga, “Bukvy”, “Suspilne”, Interfax-Ukraine and Ukrinform. Instead, it was most often standard violated on “Politeka” website.

This standard was most often violated in online media in the third quarter of 2020. On average, 91% of the news items had no violation of that standard.

The vast majority of news items on these resources were written without any violations of professional standards of journalism. On these sites, in the fourth quarter of 2020, we recorded a slight improvement in compliance with professional standards of journalism: an average of 1% compared to the previous monitoring period. In particular, the improvement of quality was seen at "Ukrayinska Pravda", "Liga", "Dzerkalo Tyzhdnya" and "Bukvy".

With a rate of 94% of materials that had no violations of professional standards, the second position in the ranking is occupied by the site "Censor".

The resource did not record any breaches of credibility or separation of facts from comments, but some unbalanced news items got to the sample. For example, the story with Arseniy Yatsenyuk's comments as to pessimistic forecasts for 2021 is unbalanced: " Arseniy Yatsenyuk: There is no money in the state accounts. The most probable scenario is 2021: economic and political crisis, early elections . "

For the second quarter in a row, the Censor website holds the second place in the rating of compliance with the quality of news.

On the RBC-Ukraine website, the sample included some pieces with signs of an order. For example, in favor of the Batkivshchyna party. In the news, “Expert called Batkivshchyna the only party that formed an alternative agenda”, the political scientist Andriy Zolotarev criticized the government: in his opinion, society needed a new  - a new development strategy that the current government cannot offer. Instead, according to the expert, only Yulia Tymoshenko can vaunt the strategy. Earlier, Mr. Zolotarev was seen as someone who figured in commissioned stories in favor of the Communist Party (before the party had been banned), the Opposition Bloc and the Party of Mayors.

An unbalanced material in favor of the "Proposition" party was also recorded: 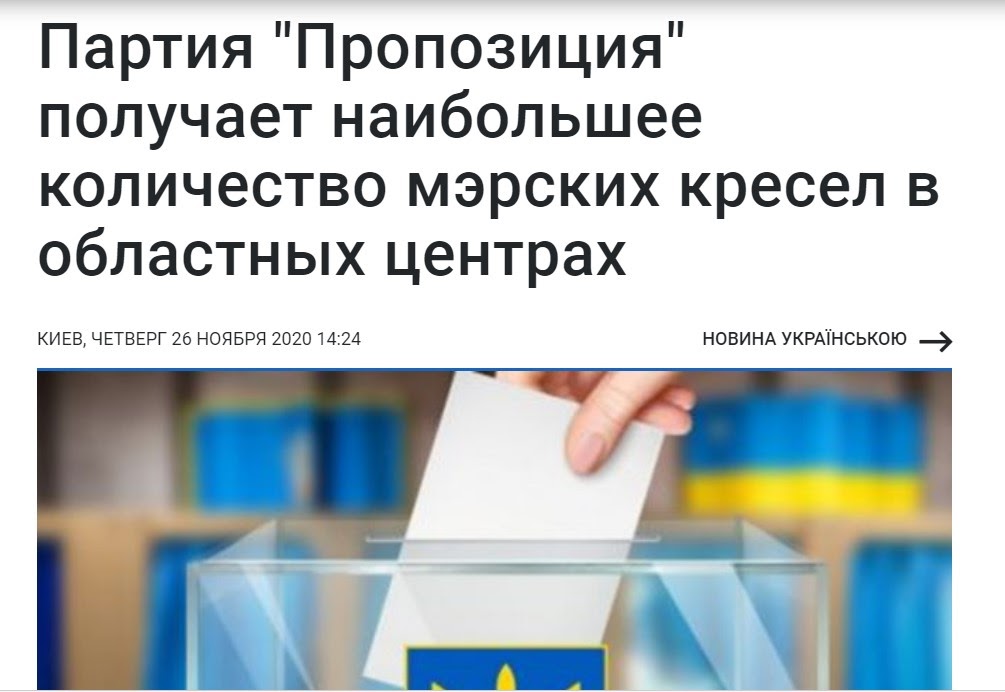 At the same time, the RBC-Ukraine website improved its performance by 4% compared to the previous monitoring period.

Several unbalanced news items with signs of ordering were recorded on the Gordon website. For example, "Yaroslavsky called on Zelensky to save Motor Sich from collapse and Ukraine from arbitration claim" had only one point of view, as did another story " Crisis, government resignation, early elections. Yatsenyuk predicted developments in Ukraine ." Both materials were also seen in other media. In general, 6% of the materials on the site contained violations of the balance standard, while no violations of the credibility standard were recorded.

These sites ended 2020 with a rate of 90% of news items written without any violation.

The Novoe Vremya website, compared to the previous monitoring period, worsened its indicators by 4%. The standard of separating facts from comments was most often violated on the site: 6% of the materials violated this standard. In the news " Bad roots? Scientists explained how the symptoms of COVID-19 depended on your genes " it is unclear where this phrase came from : "bad roots", because in the study there was no such thing, at the same time it might sound offensive to people who had suffered from Covid -19. The sample also included a story with signs of the order, improperly marked: " Smart watches and wireless headphones - gadgets from the ecosystem of the Samsung Galaxy Z Fold2 smartphone . "

The "Korrespondent" site most often violated the standard of credibilityy. The resource had some news with a link to social networks without a hyperlink or a screenshot: "The MP claimed what was the thing the IMF has changed at the budget for 2021. " According to IMI experts, the news " Mass vaccination against COVID has been announced in Russia " was unbalanced , as it formed a positive image of the aggressor country. We have to note that the site had a large number of news items about Russia. According to IMI experts, such an information policy is to return Ukraine to the Russian Federation’s sphere of influence.

The Interfax-Ukraine website has significantly improved its results. If in the previous monitoring period, the indicators of the resource were only 80% of the pieces with no violations, then in the fourth quarter of 2020 the growth of indices was as much as 10%, the indices accounted for up to 90% and fourth place in the ranking of professional standards.

Interfax-Ukraine has significantly improved its compliance with the standard of credibility. During this monitoring period, no news with a violation of the credibility standard was recorded on the website. Some pieces that broke the balance standard were found on the site, such as:

The site ended 2020 with 86% of materials written without violations of any professional standard. This is a 10% better result than in the previous monitoring period.

8% of the materials violated the standards of balance and separation of facts from comments.

The sample on Channel 24 included materials with signs of an order in which the balance standard was violated: " Lease of business premises in Lviv - where better, the advantages of HYGGE ". Some evaluative judgments were revealed in the news " Armenians mistakenly burned the village of Charaktar, which should not be given away ", which said that it was " a stupid and senseless mistake ".

70% of the materials on the Strana website had no violations of professional standards. The site has not changed its performance compared to the previous monitoring period. The standard of balance and separation of facts from comments was the standard most often violated on the resource. At the same time, there were violations of credibility and balance.

For example, the news "About half of the inhabitants of Moscow have contracted the coronavirus and have antibodies - the mayor of the city", the primary source of which was the Russian propagandist channel "Russia-24". During the monitoring period, the site also posted some pieces on political issues that contained numerous violations and had signs of order, such as "10 main accusations of David Zhvania against Poroshenko and Co."

Next to last position of the rating was occupied by three sites at once: "Obozrevatel”, 112 and TSN : they hadf 68% of pieces that did not contain violations of professional standards.

The most obvious worsening was seen at the TSN website, which deteriorated by as much as 10%. IMI experts began finding on TSN site had violations of the separation of facts from the comments:  26% of the news items. This was especially true for show business news:

" Courtney Kardashian, 41, showed a photo in a bikini "

Such news had elements of objectification of women, so it can also be regarded as sexism. And this was a violation of the Code of Journalism Ethics.

The site also regularly was publishing some anonymous astrological forecasts, which was violation of the standard of credibility: " Lunar calendar for November 27-29: days when you do not need to make nourishing face packs ."

On the site of channel 112, the largest number of violations was recorded in the category of balance standard: in 20% of materials. In particular, the balance was lacking in a whole series of news about the Orthodox Church of Ukraine, for example, " The UOC did not gain independence and disintegrated immediately after its formation - Petro Tolochko ."

The “Obozrevatel” website has hardly changed its performance compared to the previous period. Unbalanced materials were most often found on the site (22%). The resource recorded materials with signs of ordering of political and economic nature:

" Batkivshchyna" offers an alternative to the current chaos and powerlessness - expert "

In particular, 74% of the materials on the site contained violations of the standard of separation of facts from comments, exaggerations, emotional cheating and ethical violations. Emotional epithets and evaluative judgments are accompaniying the news on this resource, and the site often exaggerates the problem discussed in the material. For example, the news "A huge snake found on the beach in Odessa (photo) " spoke of only about an ordinary small boa constrictor, which posed no threat.