Almost a third (27%) of reports published in mass media of Southern and Eastern regions of Ukraine deal with coronavirus and then with crime news (23.5%).

These are the results of the monitoring conducted by the NGO "Institute of Mass Information" in May 2020 in the regional media of eight south-eastern regions of Ukraine (Zaporizhzhya, Mykolaiv, Odessa, Kherson, Dnipro, Kharkiv, Luhansk and Donetsk regions) *. 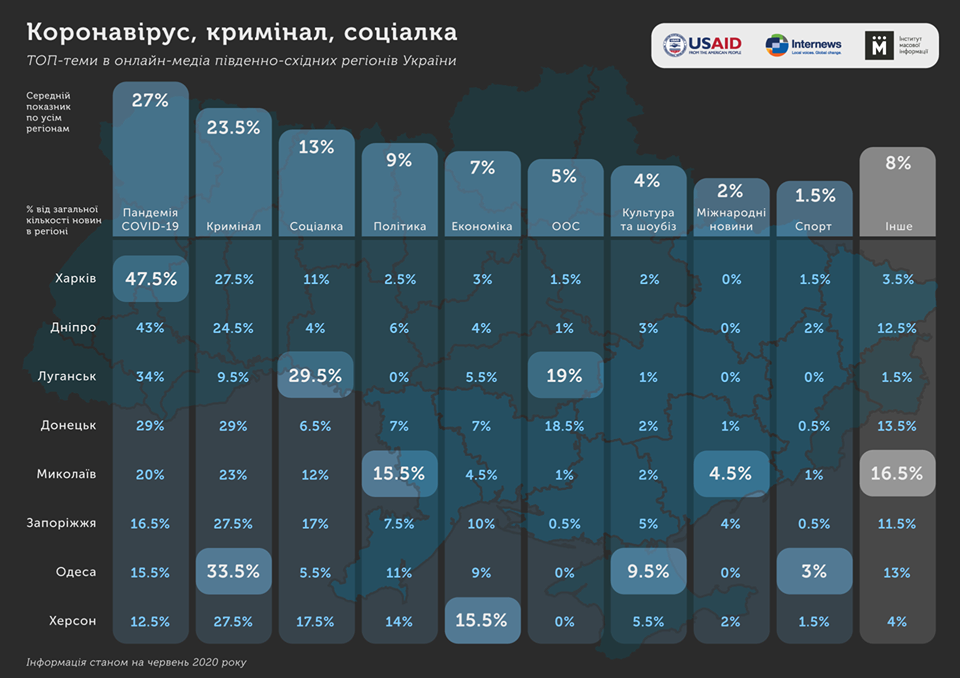 According to IMI survey, pandemic remains key topic in regional online editions. It accounts for an average of 27% of the total amount of materials. The coronavirus pandemic was covered the most frequently by Kharkiv mass media, where almost half of the content (47.5%) was dealing with this issue. The Kherson media spoke the least of coronavirus infection: only 12.5% ​​of the total number of stories.

According to the study, in terms of the number of news, the second place in regional mass media was the crime, which accounted for 23.5% of all regional media content. Interestingly, last year, crime accounted for an average of 33% of regional media content. This topic was mostly raised in the media of Odessa, where more than a third of the materials (33.5%) was about crime. The least percent of news about the crime was recorded in the media of Luhansk region - 9.5% of stories.

Compared to last year, the coverage of cultural events (from 8 to 4%) and sports (from 4 to 1.5%) has significantly decreased, which can be explained by the lockdown effect.

* The analysis was conducted in the online media of the south-eastern regions of Ukraine: Kharkiv, Odessa, Dnipro, Kherson, Mykolaiv, Zaporizhzhya, Donetsk and Luhansk regions (controlled by Ukraine). In each region, the five most rated online media in the period from 11 to 17 May inclusive were monitored. The total sample was 3800 materials.