Less servants and more partners: what politicians spoken of in Lviv online editions

Most publications and candidates avoid fair political advertising, instead they use every pretext to get spotted in the news and employ their own media assets.

Today, in time of election campaigning, parties and candidates are actively using media landscape to be kept in mind of those who sympathize them and to persuade their potential voters, as a large part of Lviv residents have not yet decided who they would vote for, neither at the mayoral election, nor for the city council. In addition, voters will decide who will join the district councils, so politicians have a lot to struggle for. And in this struggle, they are actively using the media landscape.

We analyzed the newslines of five online publications popular in the region (" Zaxid.net ", " Vgolos ", " Tvoe Misto ", " Lvivsky Portal " and " Varta1 ") from September 7 to 11, inclusive, to understand how much politicians are present in mass media, which political forces are mentioned the most and in which contexts. Despite the fact that the election campaign is already in full swing, the number of news mentions of politicians and political parties is relatively small - 13.5% (171 news out of 1284). However, the number of mentions was slightly higher (240), because representatives of two or more political forces could be present in one news item.

Among the political forces, the most mentioned were "Servant of the People" (20%, 12 materials), "European Solidarity" and "Motherland" (Batkivshchyna) (14%, eight mentions each), "Voice” (Holos) (12%, seven mentions), "Opposition Platform". - for life "and "Svoboda” (Freedom)"(10% each, six mentions). Less mentioned were the regional parties, in particular the “Varta” (Guard) - 8.5% (five mentions, and almost all on the same resource).

Most parties were covered mostly in neutral tone or in a positive way, while the OPFL in Lviv's online media appeared mostly in a negative context. This party was mentioned in polls and when they talked about the head of its political council, Viktor Medvedchuk, in particular his trip to the occupied Crimea ( Zaxid.net , "Tvoe Misto", " Lvivsky portal ", "Vholos"), about purchasing by him of 23 hectares of the Bulgarian coast ( Zaxid.net ) and the eventual appointment of his lawyer as Deputy Prosecutor General ( Zaxid.net , "Tvoye Misto", "Vholos"). Also "Vholos”  spoke of pre-election activity OPFL in Kiev.

Almost all mentions of "Svoboda" were published on "Vholos", media, which, would be related to this political force. In particular, the edition cited a political expert, Taras Zagorodny, saying that that was a political force was a singly party formed around the idea. "Svoboda" was countered with "Servant of the People", "Holos" and "Batkivshchyna".

"Batkivshchyna" was largely spoken of due to illness of its leader Yulia Tymoshenko.

“Za Maybutne” party was inexistent during the monitoring period on the pages of the local online publications we analyzed, and this goes against the fact that this political force is actively campaigning in many regions and massively promoting itself in mass media.

The presidential political force, among other things, was mentioned due to a story with a repost of an interview with the head of the Lviv Region Road Service Oleh Bereza on Facebook on the page "Zelensky's Team in Lviv". The post was illustrated with an image of roads in Murmansk, taken, apparently, from photo stocks ( Zaxid.net , "Tvoye Misto"). 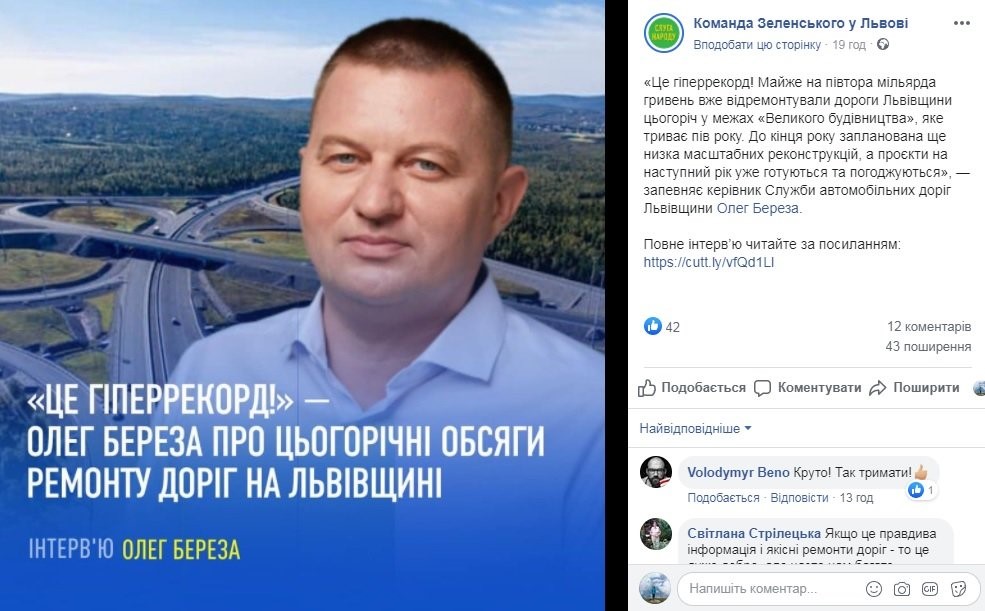 Mentions of candidates for the post of Lviv mayor were irregular. The former MP and entrepreneur Ihor Vasunyk was mentioned sixteen times, almost 90% news mentioning him came out on "Lvivsky portal", the owner of which, Tetyana Ovcharenko was pointed as assdistant of that politician by “Hashi Hroshi” program (Our money).

Thirteen times they wrote about the current mayor Andriy Sadovy: six mentions each on Vholos and Zaxid.net. Moreover, the mentions of "Vholos" were traditionally critical: Sadov was accused of abuses in the city hall, numerous scams and the fact that he was conducting his election campaign at the expense of Lviv residents. The "garbage topic", which was well-known move against the mayor, was mentioned for several times. And Zaxid.net, which is part of the media holding, co-owned by the mayor's wife, Kateryna Kit-Sadova, quoted the incumbent mayor in a very positive way, particularly in the news about the renewal of the permit for childbirth with the partner and the Wiz-art festival award .

The representative of "European Solidarity", ex-head of the Lviv Regional State Administration Oleh Syniutka was mentioned six times. Half of the mentions of him came out on “Vholos”, where he, in particular, slammed the head of state. The edition would be related to "Svoboda" and the deputy of the city council from “Petro Poroshenko’s Block” Hryhoriy Kozlovsky.

Five times the newsmaker was the candidate from the "Holos" Yaroslav Rushchyshyn, and three mentions were the political advertising, sometimes marked and sometimes not really.

Other candidates, including Taras Klof, from the “Servant of the People”, were mentioned in the news once or twice. These isolated mentions on Zaxid.net and "Tvoye Misto" were due to the publication of the results of the poll from the sociological agency "Fama", held on September 1-7 and published on the 11th, and an introductory story with the list of those who were going to run for.

"Lvivsky Portal" told only about ratings of political parties, made by the sociological group "Rating" on August 29 - September 3 and published on September 9. It seems, the story on mayoral candidates was of not so big interest for this media, given the fact that according to this poll, Igor Vasyunyk had little chance to win (about 2%). None of the candidates was mentioned at “Varta”.

Political advertising and jeansa. A marked political advertisement of Oleh Syniutka was published on "Tvoye Misto" , which said that " it's time for Lviv ." But on "Vholos" failed to mark this political ad as such. Yaroslav Rushchyshyn, who represented the “Holos” team in some districts of Lviv, also appeared in the news. "Tvoye Misto" marked advertising in accordance with the law, and "Lvivsky portal" published two stories (1 , 2) marked ® at the end of the text, which is an improper labeling. 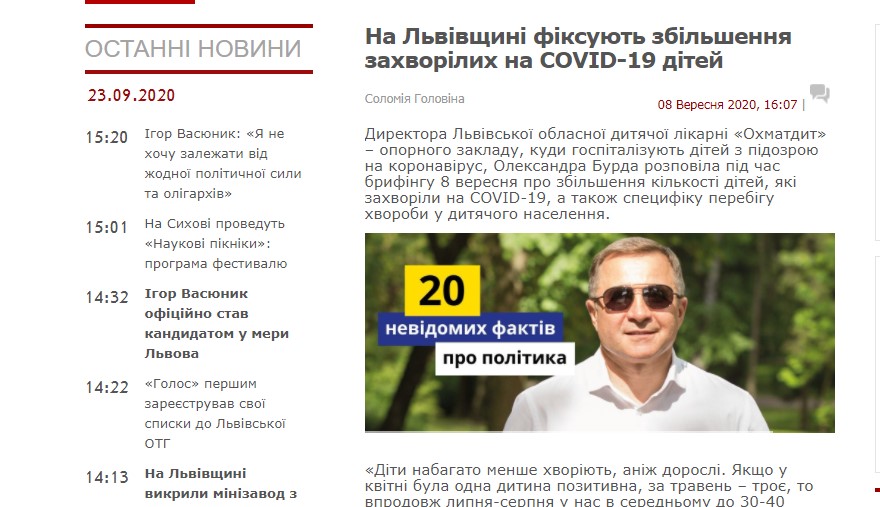 Stories about the intense activity of "Varta" on the resource with the same name were published without marking at all. Activists created inclusive platforms, signed memoranda and boasted their work with foreign companies. The stories had no comments from people or organizations for whom this topic might be improtant, only quotes from representatives of “Varta”. So there is every reason to talk about the signs of order and unfair employment of media resources.

30% of mentions were of current government officials and heads of state, including the head of state, who did not declare they would take part in local elections. But, as for now. Now political forces are forming their lists for city and district councils, and there may be unexpected names (such as the head of the Ministry of Health Maksym Stepanov at the head of the "Servants of the People" to the Odessa regional council).

This material was made possible by the support of the American people through the USAID Media Program in Ukraine, implemented by the international organization Internews. The contents are the sole responsibility of the Institute for Mass Information and do not necessarily reflect the views of USAID, the US Government or Internews.