In 2020, 44% of journalists faced persecution for their professional activities - IMI research

In the span of the year 2020, 44% of IMI media professionals we interviewed, had been facing threats, attacks, physical violence or cyberbullying due to their journalistic activities.

These are the results of an anonymous targeted survey of media outlets conducted by the Institute of Mass Information on December 14-22, 2020 *. 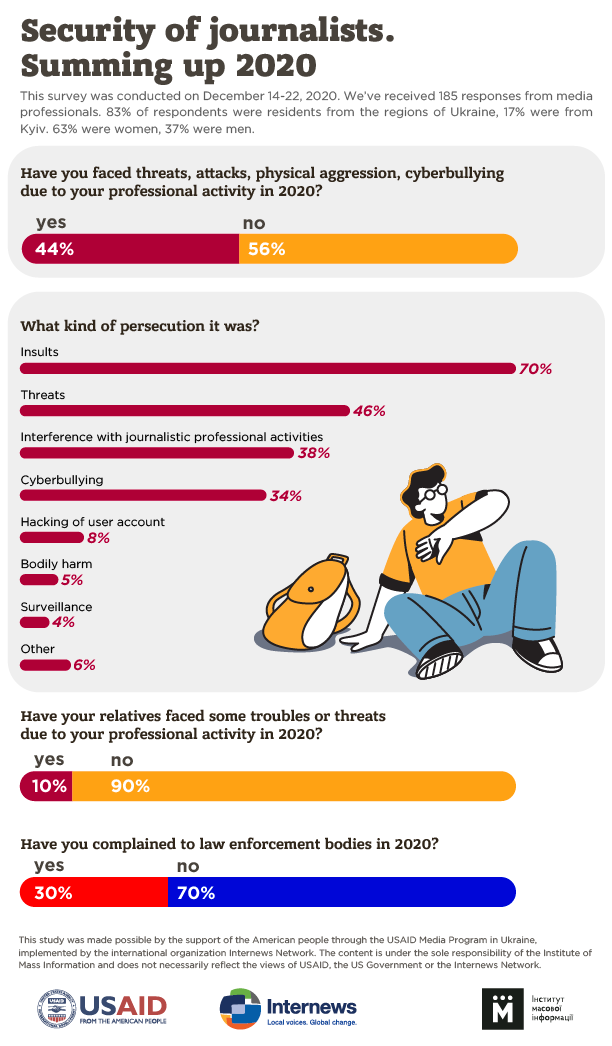 More than half of the media professionals (70%) have been insulted. The second most widespread category was "threat": it was mentioned by 46% of respondents. 38% and 34% of respondents, respectively, suffered from obstruction to their legal professional activity and cyberbullying. And another 5% of respondents were injured for their journalistic activities **.

Only 30% of interviewed journalists who were persecuted for their professional activities said they had complained to law enforcement.

In addition, 10% of journalists surveyed said that members of their families had been persecuted or were under pressure due to their professional activities.

* The survey was conducted using an anonymous online survey using an interactive structured questionnaire, a link to which was sent to potential respondents - journalists and editors. A total of 185 responses were received from the media. 83% were respondents from the regions of Ukraine, 17% were from Kyiv. 63% were women, 37% were men The survey was conducted during December 14-22, 2020.

** The sum of the answers is not equal to 100%, because the respondents could choose several answers

This study was made possible by the support of the American people through the USAID Media Program in Ukraine, implemented by the international organization Internews Network. The contents are the sole responsibility of the Institute of Mass Information and do not necessarily reflect the views of USAID, the US Government or the Internews Network.