IMI: recorded a decrease of cases of interference in March.

IMI recorded violations of the freedom of press and obstruction to lawful professional activities of journalists in 9 regions of Ukraine. 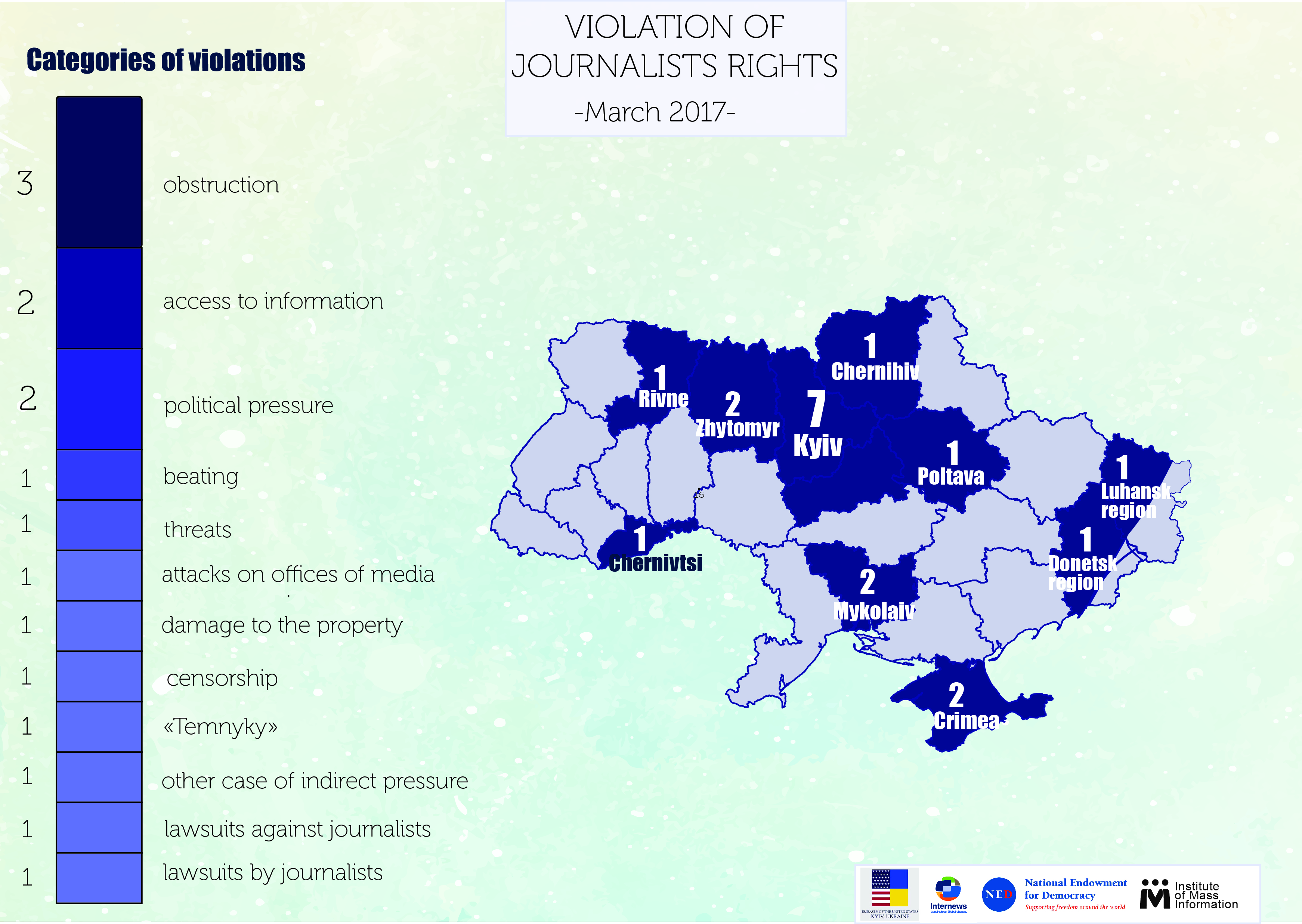 IMI recorded a decrease of cases of interference – only 3 (while in January – 5 cases and in February - 7) in Ukraine, in March. Yet, this category of violations of journalists' rights remains to be leader since the beginning of the year.

IMI recorded violations of the freedom of press and obstruction to lawful professional activities of journalists in 9 regions of Ukraine. In particular, the leader of this month became Kyiv region (seven cases), Zhytomyr – 2 cases and two cases in Mykolaiv oblast, in March.

Journalists’ obstruction from filming were recorded in Kyiv and came from sides of singer Svetlana Loboda bodyguards and Head of Zaporizhia Regional State Administration.

Loboda guards forcibly took away all recording video equipment, such as camera and DVR machine from journalists of TV channel 1+1. The channel’s crew were filming a plot for “Ukrainski sensatsii”( Ukrainian sensation) near singer’s house. In turn, the press service of Svetlana Loboda called guards attack on journalists 1+1 "nonsense and lies", saying that the journalists tried to enter the territory of the house.

The guardian of Zaporizhya Regional State Administration Chairman Konastiantyn Bryl, attacked the crew of "Nashi hroshi” (our money). The guardian attacked journalists while they were filming a plot near the territory of house of the Chairman, during the attack he injured journalists.

The veteran head of the NGO Oleksandr Zashchytnikov attacked Zhytomyr journalist of TV channel 24 Oleksandr Kryzhanivsky, while trying to snatch a camera. Reporters conducted investigation for the program, to show how veteran organization spend money allocated from the budget, and whether they are Soviet symbols inside their office.

IMI experts recorded 2 cases of restriction of the right of Access to public information and political pressure in March.

Journalists hadn’t have the access to public information in Mykolaiv and Rivne oblasts. The director of the municipal enterprise of Mykolaiv City Council "Mykolaiv intercity Bureau of Technical Inventory" Volodymyr Ryzhyk is ignoring requests for information from the correspondent of the Internet outlet "Prestupnosti.NET" Andriy Lokhmatov. The journalist sent to the company 2 e-mails with requests for information in February 7, 2017, but after months of waiting, he hadn’t received any replies.

In Rivne oblast, Babynsk  joint  local community did not respond to statutory deadlines on information requests of Rivne journalist Yuri Dyuh, which he sent in early March. The journalist also said that the he could not get through the phone to the management of the community, either mobile or a landline phone.

Political pressure this month felt journalists who cooperate with anti-corruption NGOs. Recall that Verkhovna Rada passed a Law No. 6172 “On amendments to Article 3 of the Law of Ukraine “On corruption prevention” requiring public anti-corruption activists to submit electronic income and asset statements, excluding such requirement for media, on the March 23, and it entered into force on March 30. The adoption of this law caused outrage among Ukrainian and international public who said that this law increases control from authorities’ side over Anti-Corruption organizations and their contractors (including, in particular, journalists) and provides an opportunity for revenge.

According to IMI, censorship concerned the ban of filming military personnel and law enforcement officials in the Donetsk and Luhansk oblasts introduced by their administrations and Terrorist Center of the Security Service of Ukraine. IMI lawyers believe that such a ban is largely restricts the work of journalists in ATO area, although not directly aiming at the media.

Therefore, IMI offers to discuss such restrictions with the Security Service, the Presidential Administration and the Parliamentary Committee on Information Policy and Freedom of Speech.

IMI recorded 2 cases of violations of journalists' rights in Russian-occupied Crimea. In particular, police detained journalist of online resource Article20 Taras Ibragimov in Simferopol. The journalist was released after one hour of questioning inside the "Center for Combating Extremism". The journalist highlights the theme of Crimea.

Thus, from the beginning, IMI recorded 2 cases of beating and censorship, 15 cases of obstruction, 9 cases of restriction of access to information and 7 cases of threats.

Only 28% of Ukrainian online media have transparent editorial policies - IMI research
Blogs
Sanctions against Medvedchuk’s TV channels. The first estimates
Do you want to be first to learn about the new research of the Institute of Mass Information? Subscribe to the newsletter!