"Holy war". How the ROC is partaking in the information aggression against Ukraine

IMI researchers have analyzed what Russian propagandists have been writing about Ukraine and what statements the Russian Orthodox Church has been making in verified Telegram channels of Russian state-sponsored media (RIA Novosti, RT, TASS, KP, and Sputnik) from February to October 2022. The sample included 189,851 posts, it was compiled with the help of IMI's own monitoring bot and the Semantrum monitoring service; the results of the bots' work were processed manually by the experts. According to IMI's estimates, the posts' total audience during this period amounted to about 30 million. The readers interacted with RIA Novosti's content (which constituted 67% of all mentions of the Russian Orthodox Church) the most.

The study showed that the Russian Orthodox Church's speakers (including Patriarch Kirill and the Church's other leaders) were most often endorsing the following four narratives about Ukraine:

Most often all these messages were coming directly from the mouth of the leader of the ROC, Gundyaev, and the heads of the ROC's various departments.

Kirill (Gundyaev) is the Patriarch of Moscow, head of the Russian Orthodox Church. When in February the Russians started shelling Ukraine, seizing territories, and killing civilians, Patriarch Kirill in no way condemned the attack on another state.

On the contrary, in his Sunday sermon in March, he blessed Russian soldiers to fight. His rhetoric has remained the same since: for example, in September, Patriarch Kirill was saying in his sermons that if a Russian soldier died in Ukraine, all his sins would be undone. By an incredible coincidence, the "absolution of all sins" claims coincided with the announcement of partial mobilization in Russia.

Analyzing the content of Russian pro-state Telegam channels shows that through the mouth of the Russian Orthodox Church leader, Kirill, the propagandists are pushing four types of narratives:

Most often, Patriarch Kirill said that "Ukrainians and Russians are one people." This doctrine was extensively outlined by Putin in his essay "On the historical unity of Russians and Ukrainians", which was posted on the Kremlin's website in July 2021. On the fourth day of the full-scale invasion of Ukraine, the ROC leader Gundyaev started speaking about fraternal nations and their shared homeland, "Rus'". In his sermons, quoted by the Russian state media and even by their Telegram channels, Patriarch Kirill is using pseudo-historical facts to manipulate his listeners. We quote:

However, Kirill's sermons mention not a single word about the fact that, say, at that very moment, Russian troops in Kyiv oblast were bombing, exterminating, torturing the civilian population and killing people en masse. The head of the Russian Orthodox Church talks about some abstract wishes for "peace and tranquility" and resorts to traditional propaganda narratives about "enemies without" and "provocations".

Dictating the idea of ​​a "united Rus'", pseudo-historical facts about the shared cradle of nations only benefits the Russian authorities, which want to seize more territory, and is only needed to justify the Russian aggression. Timothy Snyder, history professor at Yale University, says that when Kievan Rus' emerged on the territory of modern Ukraine, there was no such nation as Russians, and Prince Volodymyr, who gave Rus' its name, actually had Scandinavian backgroud himself. However, the occupiers have no interest in true historical facts, as their goal is to justify an attack on another country.

In his sermon in September, the head of the Russian Orthodox Church openly denied Ukraine's independence as a state and implied that it is due to pressure from others (clearly meaning the West) that Ukrainians are hostile towards Russia. Patriarch Kirill had no other reasons to explain why Ukrainians may be hostile to Russia and Russians. His sermons, quoted by the Russian media, said nothing at all about the war or about the Russians attacking and occupying the territory of an independent state.

Moreover, there have been multiple remarks denying or justifying Russia's aggression coming from Kirill, the Patriarch of the Russian Orthodox Church, the message being that Russia is actually a peaceful country which has not attacked anyone (?) and is only defending its borders. Such statements are part of the doctrinal vision that Russian propagandists have been actively promoting for years. For instance, this is what the Russian patriarch has been saying in state media on multiple occasions in May 2022:

There were many posts on pro-state Russian Telegram channels that contained statements from a supposed Ukrainian Orthodox priest of the Moscow Patriarchate claiming that "Ukrainians are reaping the war for their sins." Such statements sound like justifying the attack on Ukraine. Quite a convenient propagandist message for whitewashing themselves and accusing Ukrainians of sin. 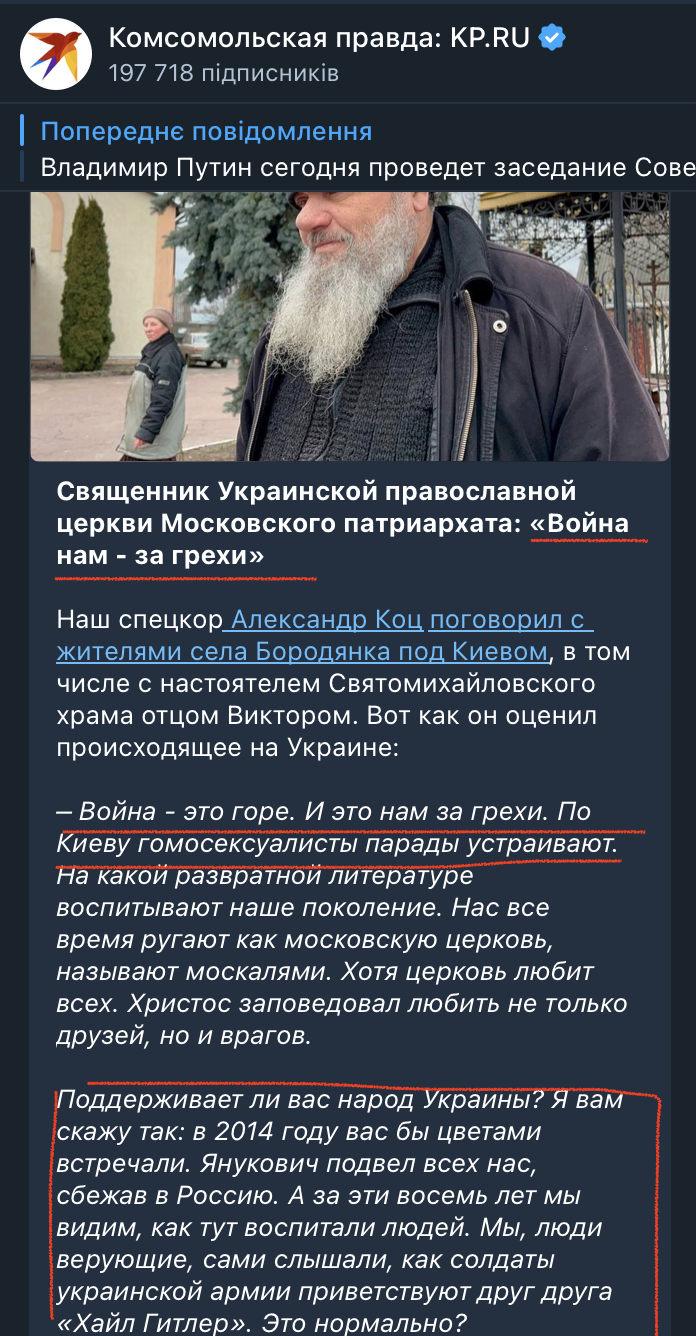 The state propaganda channel RT published an anonymous report justifying Russia's military aggression against Ukraine. The channel is supportive of the "special operation" because "the Russian Federation had no other choice." We consider it to be one more way of justifying the genocide of Ukrainians. 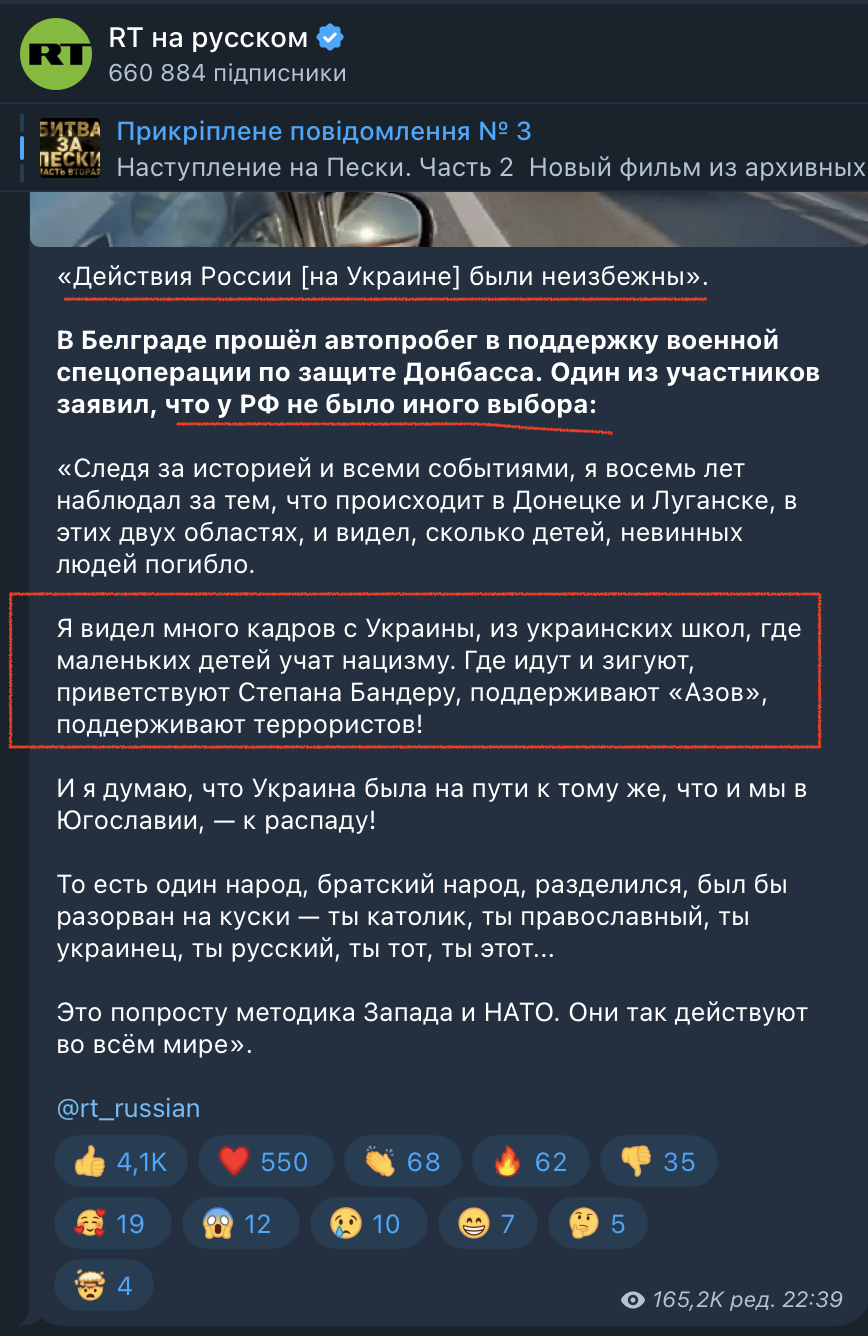 There was another example of shifting the blame for the war onto Ukrainians coming from Patriarch Kirill. He has repeatedly parroted the Russian propagandists claims about "Ukrainians bombing the Donbas." This is one of the most typical arguments used to justify the Russian invasion and Russian aggression in Ukraine. Patriarch Kirill reminded his listeners that "the people of Donbas have also been suffering all these years" from war, but no one responded to it the way the world is responding now, when the Russians are destroying the Ukrainian land.

One of the components of genocidal rhetoric is sacralization of war. That means exploiting religious narratives and theological concepts, justifying crimes by supposedly good intentions which religion encourages. An example of such sacralization can be found in a RIA Novosti story about the ROC leader's visit to a hospital where wounded Russian soldiers who had been away killing Ukrainians were receiving treatment. RIA Novosti filmed a mystical story 90s style: they say that "a silhouette of Virgin Mary" manifested on the door of the intensive care unit where Russian soldiers were being kept. This story is a vivid example of Russia's aggressive war propaganda that involves war sacralization elements, as it assignes a divine meaning to the war, paints it as the last crusade against "demonic Ukrainians." 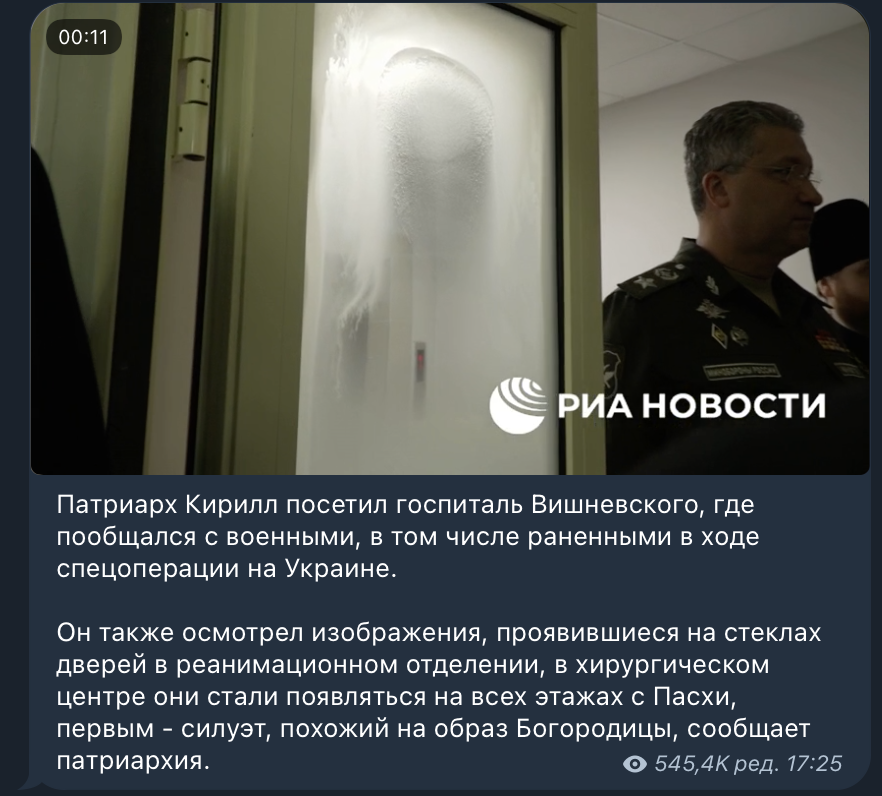 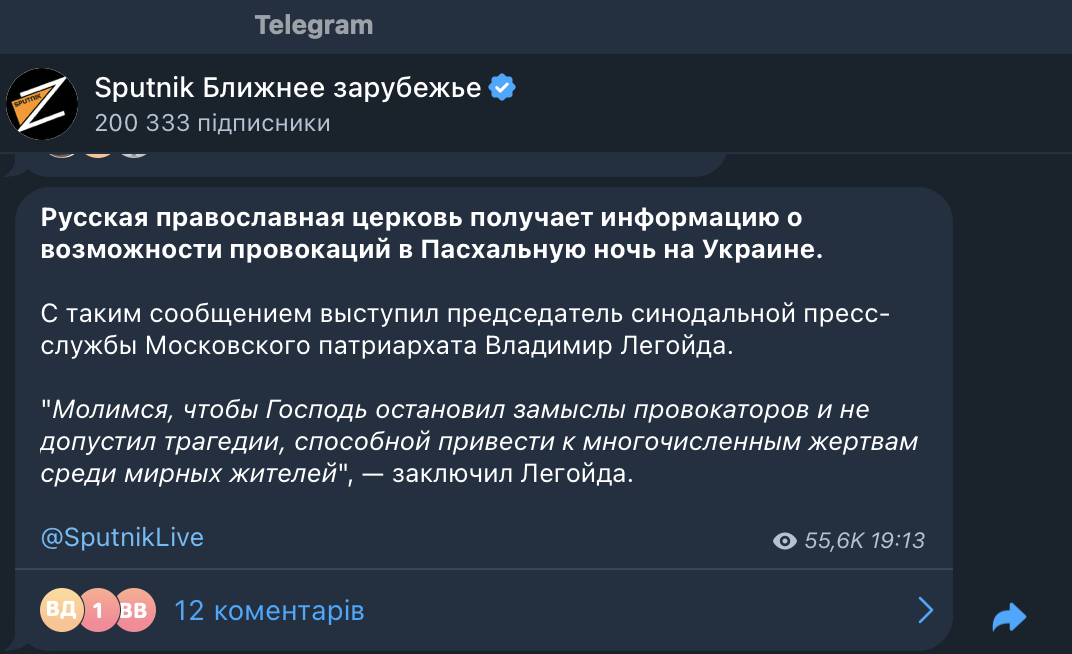 Russian pro-state Telegram channels also cited the Russian Orthodox Church in two "humanitarian" narratives. The first one was about supporting the Orthodox people of the Donbas, as they are part of the Russian Orthodox world. These statements contained quite frank disregard for Ukraine as an independent state and are nothig new – they are a repeat of that same "one people" doctrine.

As IMI's monitoring shows, the Russian Orthodox Church is actively sacralizing the war, encouraging Russians to take part in the mobilization, denying Ukraine's statehood, and even claiming that Ukrainians deserved the war.