Discrediting Biden and "Ukraine is to blame for this war." Anti-Western and pro-Russian narratives in Ukrainian online media

37% of pro-Russian misinformation and manipulation that have been actively spread in Ukraine target Western countries, and  mostly the United States.

These are the results of a monitoring study the Institute of Mass Information conducted passing through 15 websites *, in which pro-Russian and anti-Western narratives, fake news, manipulations, and news campaigns were identified during the period of 2020-2021, and which were seen just at the same time, as Russian propaganda mass media outlets launched its campaigns.

The study found in the Ukrainian segment of the Internet 6 sites from among the TOP-50 most visited, which systematically disseminated pro-Russian and anti-Western narratives. And after the sanctions of the National Security and Defense Council imposed on the set of Medvedchuk TV channels, these sites lost only a quarter of their audience in total. Prior to Medvedchuk's media blockade, these 6 sites had more than 42 million views per month (data from the specialized site similarweb.com). As a result of the decision of the National Security and Defense Council, three of the six sites changed domains and lost their audience, while the other three could keep one’s audience and have a total of 31 million views per month. 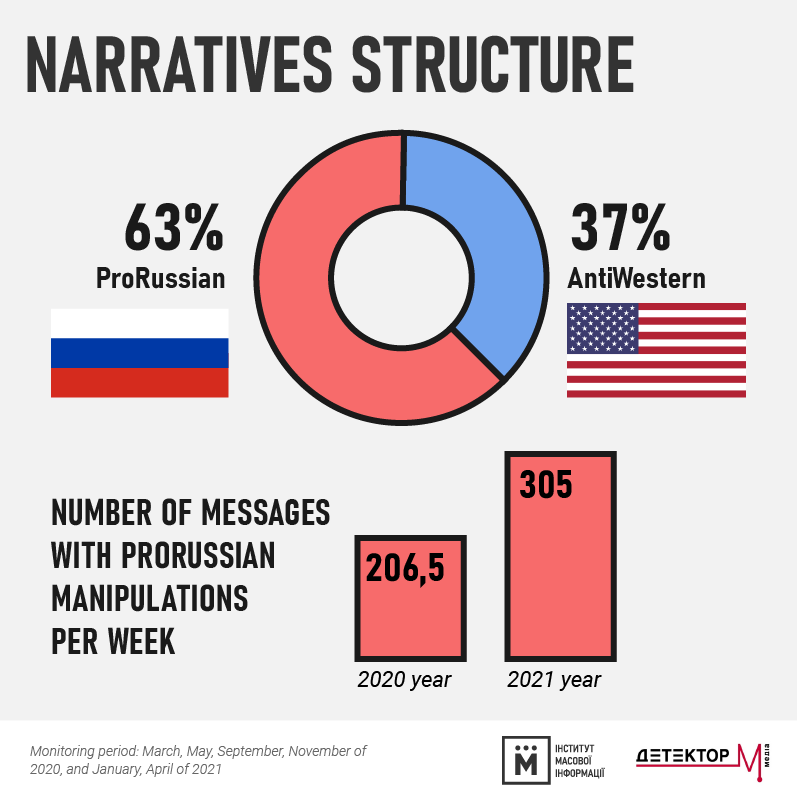 The study also found that the most common categories of narratives in these media were "Ukraine is under external governance" (18.5% of Russian propaganda in Ukraine) and "escalation of the Ukrainian-Russian war is Ukraine’s doing" (14.15%). Most often, these narratives are spearheaded against the presidents of the United States and Ukraine, Joe Biden and Volodymyr Zelensky.

6 periods were selected for this study:

2) May 14-20, 2020 - the period of the information campaign on the activities of "secret US biological laboratories" in Ukraine and the publication of the so-called "Derkach tapes";

3) September 4-10, 2020 - the period of the information campaign on US bombers aircrafts that flew over Ukraine;

4) November 2-8, 2020 - the period of voting and establishing the results of the US presidential election; 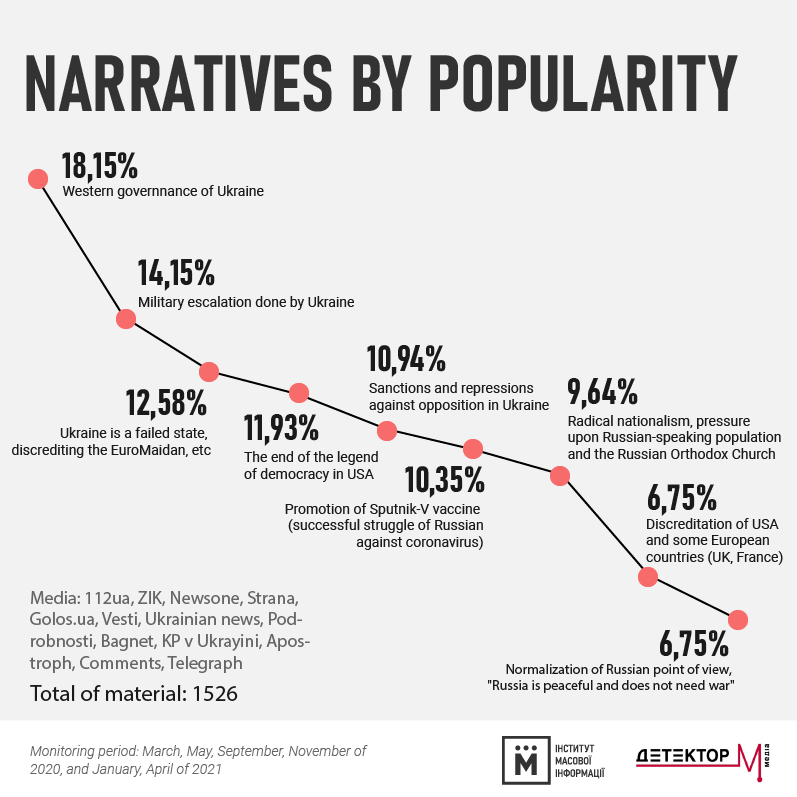 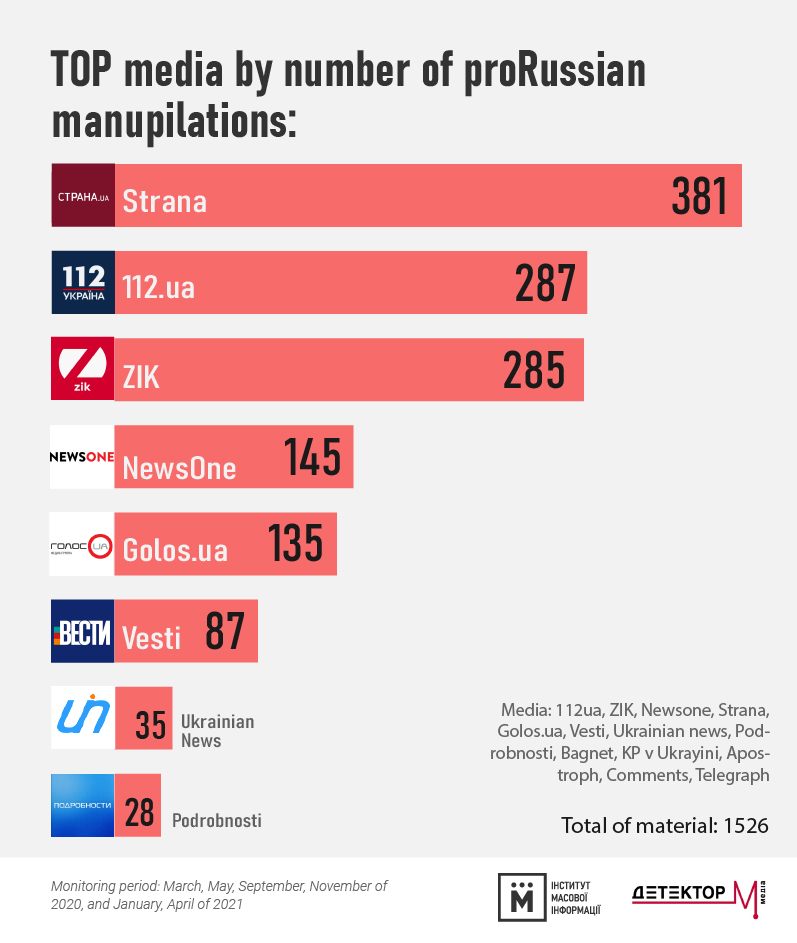 Repartition of news items with anti-Western rhetoric is not equal depending on periods of the monitoring and is related to anti-Western information campaigns in Ukrainian mass media.

This period coincides with a campaign to promote the so-called "Derkach tapes" - recordings of the Biden-Poroshenko conversation and claims about the need to investigate corruption involving American and Ukrainian officials. Another spike occurred in January 2021, when 137 materials with anti-Western narratives were recorded (24% of all materials). This period coincided with an active criticism of the new US administration, including the new President Joe Biden. Pro-Russian materials actively covered the smallest nuances of developments in the Capitol, raised the question of eventual election fraud in the United States. The pro-Russian media also actively disseminated information about Ukraine's foreign governance. In April 2021, the narrative was spread saying that it was the Western countries (in particular, NATO) that sought to harm Russia and the post-Soviet countries ("Europe and the United States are playing their combinations")

At the same time, there is no significant decrease in anti-Western news items after the blocking of mass media that fall within the sphere of influence of Viktor Medvedchuk.

The most of news items promoting anti-Western rhetoric were found on the site strana.ua : 173. Also, among the key channels spreading such narratives were mass media belonging to the sphere of influence of Viktor Medvedchuk (112ua.tv, zikua.tv, newsoneua.tv), where our experts found a total of 195 materials with anti-Western narratives.

Here are examples of pro-Russian and anti-Western narratives in the news of these sites.

The main categories of narratives published by "Strana":

1) "The escalation of the Ukrainian-Russian war Ukraine’s doing, Ukraine is guilty of non-compliance with the Minsk agreements" - 53 materials throughout the monitoring study period. There is an increase in news with such a rhetoric in the spring of 2021 during the period of built-up of Russian troops to the border with Ukraine and the occupied Crimea.

2) "Trump's victory in the presidential election was stolen" : 36 materials between November 2-8, 2020 and January 4-10, 2021. There is a tendency to biased coverage of the vote count, in particular, quoting Donald Trump (primarily from social networks) and representatives his headquarters.

"Extremism / Nationalism / Nazism / Hard-core nationalists in Ukraine" - 46 materials throughout the whole period of the monitoring study.

5) "The end of the legend of democracy, Biden is corrupted" - 34 news items. In particular, “Strana” began to employ such rhetoric during May 19-20, 2020, as Andriy Derkach published the so-called recordings of a Biden-Poroshenko telephone conversation. To the point, Strana provided information support for this news campaign, which the editorial office itself called Bidengate.

Narratives denying Navalny's poisoning ("If it was a" Novichok", we wouldn't have seen him alive") and the news dated of September 7, 2020, and the involvement of foreigners in the falsification of poisoning were also published on the Strana website. The second case concerns the so-called "Lukashenko's recordings" - allegedly intercepted conversations of foreigners published in September 2020, which discussed creating problems for Putin so that he would not interfere in the affairs of Belarus.

And in the list of materials with the category of narratives "NATO threatens Russia" there is news for 6.09.2020 "American planes are practicing missile strikes on Russian territory."

Much of these narratives are presented like an editorial stuff. Also anti-Western and pro-Russian narratives were voiced by:

Golos.ua has 2 million hits per month. As to the registration documents, the founder and ultimate beneficial owner of GOLOS.YU LLC is Oksana Vashchenko. She is the wife of the leader of the Communist Party of Ukraine Petro Symonenko.

The main categories of narratives spread by the site golos.ua:

2) "Escalation of the Ukrainian-Russian war is Ukraines doing" : 31 news items.

Anti-Western and pro-Russian narratives were voiced by:

"By refusing to negotiate the purchase of the world's only Russian coronavirus vaccine, the Ukrainian government has once again put its political ambitions above the lives of millions of citizens of our country" in the news dated of 5.11.2020;

4) “The escalation of the Ukrainian-Russian war is Ukraine’s doing ”: 31 news items

Also, 112ua.tv website had news supporting pro-Russian and anti-American information campaign on the so-called "secret US biological laboratories in Ukraine in the." "What kind of ne’er-do-well you have to be, if you hide the information about American bacteriological laboratories and the experiments that are being conducted there from your people?!" This is not the government, this is an organized crime syndicate, and Ukrainians are just a biomass for them to conduct experiments with combat viruses and this in total impunity! " as they said in the news dated of 14.05.2020.

Among the news items with anti-American rhetoric, it is worth to be noted the following ones:

-The narrative about the decline of the West from January 8, 2021: "The storming of the Capitol by right-wing radicals, in which several people were dead, and shops and police stations were burnt, robberies by left-wing radicals took place two months ago, evidenced a deep schism in American society."

Anti-Western and pro-Russian narratives were voiced by:

“VESTI” gets 4 million hits per month. The domain vesti.ua is registered to the Cypriot company MEDIA HOLDING VESTI UKRAINE LTD. The same company is listed on the site itself. The  Vesti Ukraina media holding is linked to fugitive Minister Oleksandr Klymenko, who went into hiding in Russia after the Revolution of Dignity.

The main categories of narratives published by "VESTI":

1) "Escalation of the Ukrainian-Russian war is Ukraine’s doing": 23 news items.

Since February 2021, the website of “Vesti” has increased many times the number of news with pro-Russian narratives. This coincided with an escalation at the front. In particular, on April 5, 2021, he spread a fake news about a boy killed by the Ukrainian military: "Since the next escalation of Kyiv's aggression against Donbass, this is the second victim who died as a result of a terrorist attack organized by Ukrainian militants."

Much of these narratives is presented like it were editorial content. Also anti-Western and pro-Russian narratives were voiced by:

In February 2021, the National Security and Defense Council staged a strike on pro-Russian propaganda on Ukrainian television. Then the TV channels from Medvedchuk's pool came under sanctions: 112th, Newsone, ZIK. Later, an attempt to broadcast this media under the new logo of the First Independent TV Channel was prevented.

As a result, pro-Russian and anti-Western information campaigns and narratives on Ukrainian television have declined significantly. Some of the speakers who voiced these narratives on Medvedchuk's channels switched to NASH and Ukraina-24 TV channels. However, the overall degree of pro-Russian rhetoric has decreased significantly. Together with the audience that consumed it.

Instead, there has been no such sharp drop on the Internet. Following the February NSDC sanctions, the online audience of anti-Western and pro-Russian narratives has shrunk by only a quarter.

Thus, before the sanctions the three sites from Medvedchuk's pool had a total number of monthly hits at the level of 11 million (112.ua - 7.5 million, Newsone - 2.5 million, ZIK - 1.2 million). Today, the statistics of views of these media on new domains are not available on the specialized site similarweb.com. This indicates low views of these sites.

Instead, an IMI study found that six sites that spread anti-Western and pro-Russian narratives between 2020 and 2021 and conducted entire information campaigns of manipulation and misinformation, with a total of more than 42 million hits per month. Now, the three sites that failed to fall under the sanctions have a total of 31 million hits per month (strana.ua - 25 million, vesti.ua - 4 million, golos.ua - 2 million).

That is, we can say that the Ukrainian online audience is still coming under influence of pro-Russian manipulative companies. And these media outlets with pro-Russian owners keep on spreading anti-Western and pro-Russian rhetorics.

Moreover, IMI analysts note that the sites of Medvedchuk's pool, strana.ua and vesti.ua increased the number of news with pro-Russian narratives after February 2021. In particular, they became leaders in the dissemination of narratives in the categories of "external governance" and "the escalation of the Ukrainian-Russian war is Ukraine’s doing" during the escalation at the front and Russia's built-up of troops to the borders with Ukraine and Crimea. 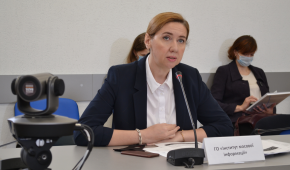