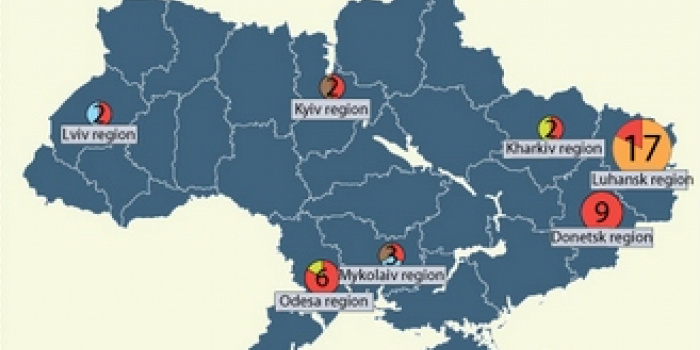 •    During the period May 2 - 9, 2014, the majority of violations against journalists related to Physical Aggression – 19 cases.

In Konstantinovka, separatists seized journalists from several English language outlets (BuzzFeed, SkyNews and CBS), and carried out 6 armed attacks. In Slovyansk, separatists attacked an ICTV crew, blocked their car and held the journalists at gunpoint, and confiscated the crew’s equipment and personal belongings. Also, separatists raided the editorial offices of the Gorniak (Miner) newspaper in the city of Torez and of the Provintsia newspaper in Konstantinovka. Assaults also took place on the offices of the broadcasting company Donbass and TV channel Union. The cottage of Serhiy Harmash, editor-in-chief of the Internet-publication OstroV, was attacked.

The situation in Odessa was especially violent. Female journalist of the Internet-publication Timer, Anna Levchenko, was attacked with stones as she covered the clashes of pro-Russian and Ukrainian activists in the city.

Physical aggression was used against journalists in Luhansk, Dnipropetrovsk and Mykolaiv

Pro-Russian activists obstructed the work of Daria Shatalova, a journalist from the outlet Politica 2.0. Unidentified people fired several bullets at the house of Roman Landyk, the co-owner of a local independent TV and radio company IRTA and a city councilman from the Party of Regions. A correspondent of the Telegazeta weekly, Svetlana Yevseyeva, was attacked. National Defense activists obstructed the work of blogger Vyacheslav Poizdnyk of zovzakona.org while he was filming a roadblock outside the town of Pidhorodne near Dnipropetrovsk. In Mykolaiv, a group of pro-Russian activists attacked an STB TV crew and obstructed their work.

Tymoshenko’s pool photographer, Oleksandr Prokopenko, obstructed the work of a reporter from the online publication Zaxid.net. The journalist, Danylo Mokryk, was prevented from filming an attack on one of the participants of the rally.

Crimea: some media are more equal than others

Media that are critical of the self-proclaimed Crimean authorities do not receive the accreditation documents necessary to attend the meetings of the local government. Local officials also decline to provide them with information and comments.

One case of indirect pressure in Mykolaiv

A group called SMERSH Ukraina on the social networking site Vkontakte posted the personal information of two local journalists under the heading “The Scum of Mykolaiv.” Information out the editor of the online publication NikVesti, Oleh Derenyuha, and a journalist from Prestupnosti.NET, Andriy Lokhmatov, was published on the site (http://vk.com/club65330119) along with the data of local people’s deputies and political activists.

Journalists forced to flee Eastern Ukraine for other regions of the country. Two such cases have been reported since the beginning of May. 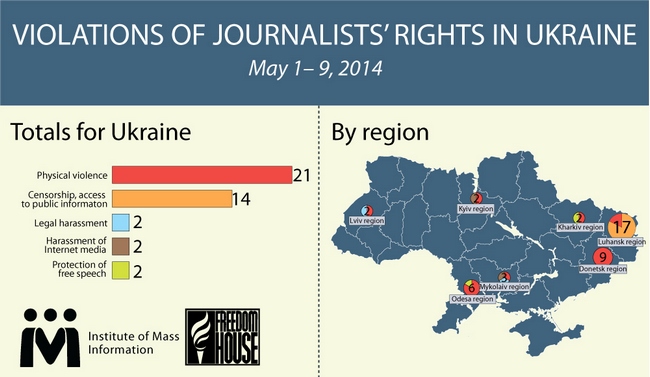