Ukraine: national TV channels turned off in the East 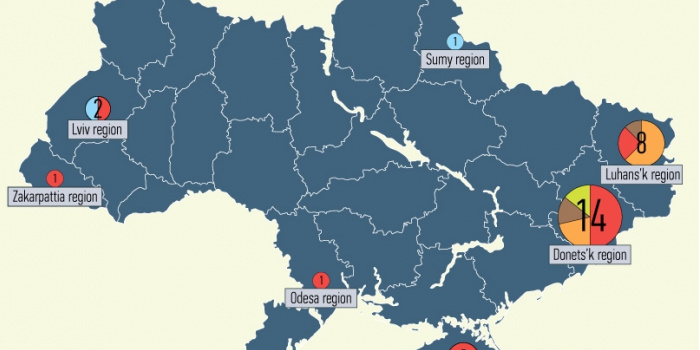 Between 10 and 16 May, the highest number of violations in Ukraine was in the category Physical Aggression – 15 cases

Shootings are on the rise. The crew of Channel 5 came under crossfire during an attack by armed terrorists on the National Guard at a checkpoint on the outskirts of Mariupol (Donetsk Oblast). In Sloviansk, separatists fired mortars at the TV tower. The broadcast tower was blocked by armed separatists in Kramatorsk. In Donetsk, the workers of RRT Concern were forced at gunpoint to turn the Radio Era FM transmitter off-air. Because of separatist threats to set the offices of Kramatorsk News and the news website Privet on fire, the management was forced to stop work. Pavel Kanygin of the Russian opposition newspaper Novaya Gazeta was kidnapped in Artemivsk, Donetsk Oblast. Journalists that work in Donbas and refuse to obey the leadership of the self-proclaimed People's Republic of Donetsk were regularly threatened with violence by the militants.

Artemivsk ceased broadcast of the 1+1 and TET channels. TET was also blacked out in Kostyantynivka, Donetsk Oblast. On the social network VKontakte, supporters of the separatists called for attacks on the newspaper Evening Makiyivka, although no action followed. A DDoS attack on the web-publication OstroV, making it largely inaccessible, lasted about three days.

In Donetsk, during the so-called referendum on the independence of the Donetsk People's Republic held on May 11, separatists prevented Ukrainian journalists from taking photos and recording video.

Luhansk saw 2 cases of violence, 7 cases of censorship, and 1 case of pressure on Internet media

A journalist from Nedelya Plus, Vladimir Startsev, disappeared. Following threats of kidnapping, journalists from the Severodonetsk website My City, suspended their work. The local cable operator TRK Luch switched off Ukrainian TV channels ICTV, TRK Ukraine, STB, 1+1, Channel 112, Channel 5 and Channel 24. In Severodonetsk a local cable operator Vokar-Holding, which is affiliated with the Kyiv-based Lanet, ceased transmission of Ukrainian TV channels – Channel 5 and TVi following demands by the separatist Army of the South East.

3 cases in the physical aggression in Crimea

In Odessa, one case of physical pressure

In the city of Kotovsk, Odessa Oblast, a local journalist Oleksandr Yakoshenko, writing under the alias Serhiy Levitanenko, was brutally attacked. His apartment was set on fire, and his equipment and documents were destroyed.

In Lviv, ZIK TV photographer Roman Baluk was attacked by an unidentified man wearing the symbols of the Svoboda party. The attacker threatened to destroy the journalist's camera unless he stopped filming. There was one instance of legal pressure in Lviv. Iryna Sekh, Head of the Lviv Oblast Administration sued the newspaper Express, demanding that it retract allegations of Sekh’s involvement in the destruction of forests in the region.

In Uzhhorod, chief editor of the online publication Transcarpathia Online, Oleh Dyba, reported that he was being pressured by local law enforcement and a local businessman.

In Sumy, the mayoral candidate Ruslan Bohdanovych threatened the editor of the newspaper Panorama, Yevhen Polozhiy, with a libel lawsuit. 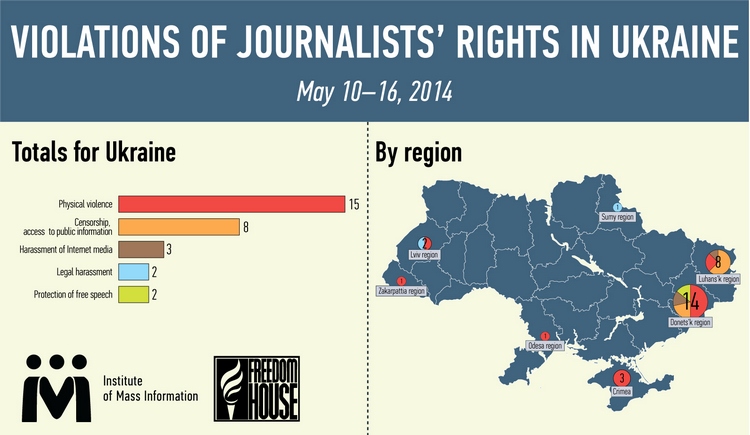