Ukraine: Donetsk oblast and Crimea take the lead in violations of journalists' rights 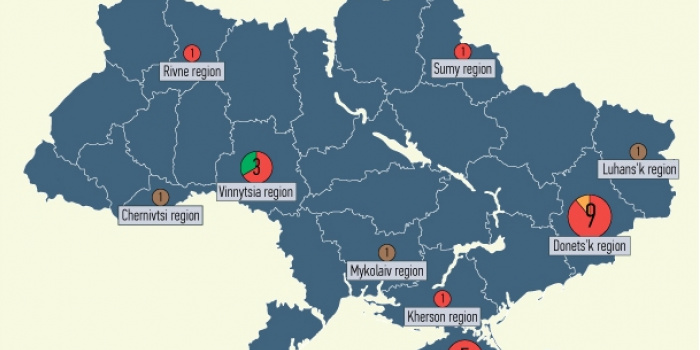 Between 17 and 23 May, the greatest number of violations in Ukraine was in the category "Physical Aggression" – 18 cases

The number of journalists under fire increased

The journalists in Donetsk oblast are subjected to the highest pressure for the third week in a row. 8 cases of physical aggression towards the journalists were registered.

The terrorists fired the TV tower near Slovyansk (Donetsk oblast) twice, where the relay station is situated. The helicopter with journalists from the TV and radio company "Donbas" was attacked by fire while they were filming. Armed representatives of the self-proclaimed Donetsk People's Republic seized the car with some printed copies of newsletter of Independent Donbas miners' trade union "Po-Horniatsky". In Artemivsk the supporters of Donetsk People's Republic seized a city council and obstructed the journalists. The editorial staff of "Donetsk Public television" was threatened with physical violence by an unknown person. Two journalists from Mariupol inform about threats and intend to leave the city because of danger. Besides, Ukrainian TV channels and radio stations are constantly being turned off. For some unknown reasons almost all Ukrainian radio stations in Donetsk were off air.

The journalists are constantly being pressured in Crimea.

In Simferopol the journalist Osman Pashayev was arrested, consequently he had to leave the peninsula because of danger. FSB detained the correspondent of Polish newspaper "Gazeta Vyborcha". The Russian SWAT arrested Artur Moriakov, a cameraman of the project "Reality", while he was covering the mournful actions of Crimean Tatars dedicated to the 70th anniversary of deportation. In Simferopol the so-called Self-Defense forces beat and detained Petro Ruzanov, a correspondent of Russian TV channel "Dozhd".

In Vinnytsia the party activists prevented an editor and a press photographer of the website "Vinnytsia info" in the Batkivshchyna Party office from filming and demanded to remove the footage. Ivan Demukhin, Head of  the Vinnytsia Oblast State Administrartion (a representative of VO "Batkivshchyna") gave an editor of newspaper "Lypovetski visti" a talk about one of the critical articles.

In Rivne Inna Biletska, a journalist of the TV channel Inter, was attacked during the public meeting concerning the appointment of the chief of the Ministry of Internal Affairs of Ukraine in Rivne oblast.

In Kherson in the building of territorial election commission the unknown tried to take away a camera beloning to Ponomarenko Kateryna,  a journalist of KVU.

Russia blocked access to the Mykolaiv online media outlet "Prestupnosti.NET" on its territory because of the published information that Russians were getting ready for mass protests against the policy of Vladimir Putin  in Moscow on May 18. 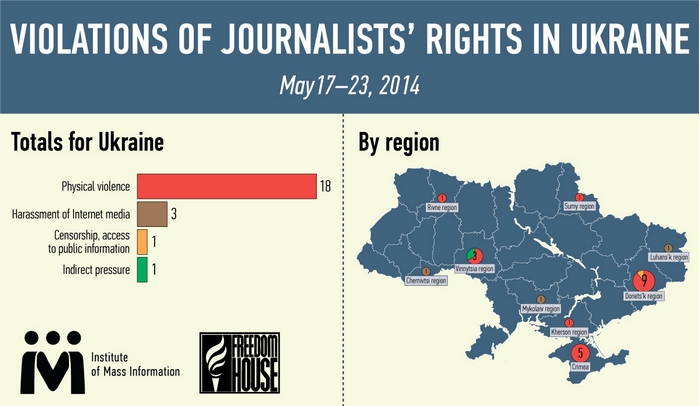 Attempts to reorientate state-owned TV channels Dom and Rada are a backtracking on democratic reforms - Media Movement’s statement
News
Database on propagandists calling for genocide is underway in Ukraine
"NikVesti" website suffers a DDoS attack
Occupiers report a TV tower in Kadiyivka being shelled
Russian military court sentences three citizen journalists
Do you want to be first to learn about the new research of the Institute of Mass Information? Subscribe to the newsletter!