Ukraine: Donetsk and Luhansk oblast take the lead in violations of freedom of press 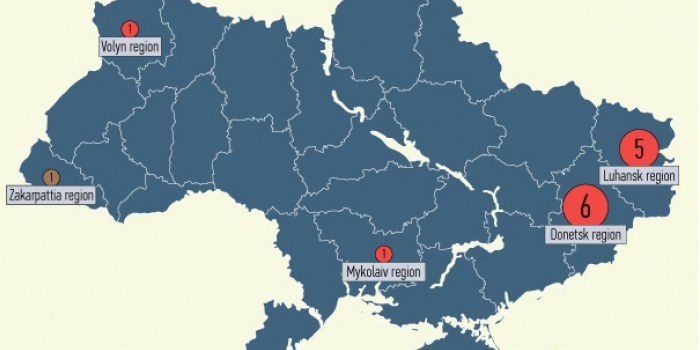 In Makiyivka, Donetsk oblast, armed men, who called themselves representatives of Donetsk People's Republic, abducted Larysa Butova, a director general of the printing and publishing integrated works "Preda Makiyivky", and Maria Semenova, an editor-in-chief of the newspaper "Vechirnia Makiyivka". Unidentified men blew up a transformer substation deenergizing a TV tower and abducted Serhiy Dolhov, an editor of the newspapers "Vestnik Priazovya" and "Khochy v SSSR". In Donetsk Oleksandr Peremot, a journalist of the online media outlet "URA-Inform.Donbass", disappeared. A group of 6-8 armed unidentified men seized an office of the TV and radio company "Donbas".

Only cases of physical aggression towards journalists were registered in Luhansk oblast.

Anastasia Stanko, a journalist of the "Hromadske TV", was detained by Russian border guards in the Ukrainian village of Milove, Luhansk oblast. The leadership of the so-called Luhansk People's Republic (LPR) brought together all editors-in-chief of Luhansk media outlets for a "conversation". The latter were told they had to publish "correct" materials about achievements of the leadership of the so-called Luhansk People’s Republic, moreover they were threatened with violence. Danylo Aheyev, an editor of the Luhansk media outlet "CityNews", was forced to leave for Lutsk because of tense situation in Luhansk. Not only separatists but also Ukrainian military put pressure on representatives of mass media in Luhansk oblast.

In Lutsk the camera crew of the local TV and radio company "Avers", which was working on the program "People's control", was forbidden to film and take pictures at the supermarket "Silpo".

In Mykolayiv the activist of the Radical Party attacked Kateryna Vovchenko, a correspondent of the media outlet "Prestupnosti.NET".

In Crimea the correspondent offices of Channel 5, Channel 24 and "Novyi Kanal" closed down. 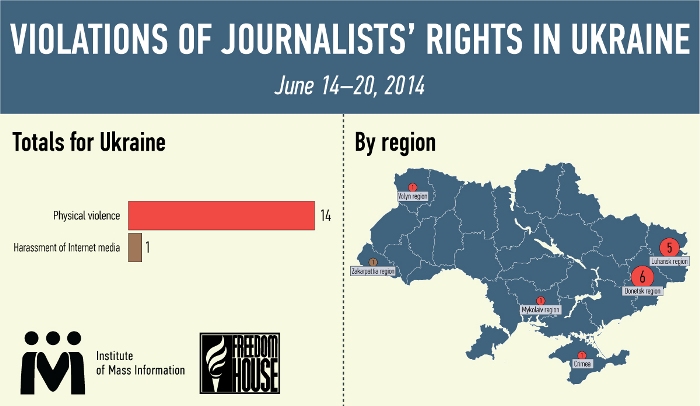