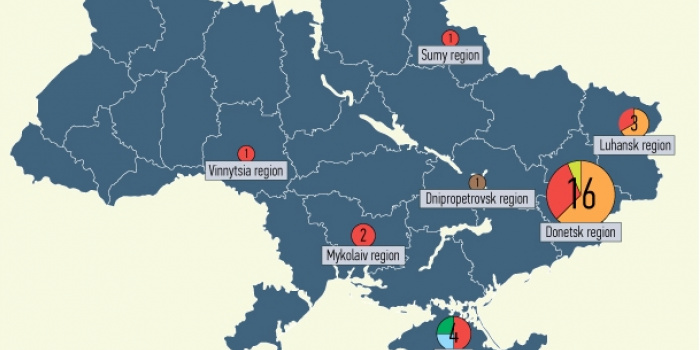 Between May 31 and June 6, the same number of violations in Ukraine was in the category "Physical aggression" and "Censorship. Access to public information" - 12 cases each.

15 cases of violations of freedom of speech were registered in Donetsk oblast.

3 cases of violations of journalists' rights were registered in Luhansk oblast.

Due to pressure from representatives of the HQ of the Army "South East" the editorial staff of the online media outlet "Segodnia in Severodonetsk" was forced to leave Severodonetsk for Kyiv.

Under pressure of the so-called Army "South East" there were some troubles with the Internet-resource "Severodonetski forumy" and "Severodonetsk online", which didn't work for several days.

As an attempt of judicial pressure on Shevket Kaibullayev, an editor-in-chief of the Crimean Tatar newspaper "Avdet", he was summoned to the prosecutor’s office in Simferopol.

Crimean police put pressure on Ruslan Yugosh, one of the founders of the website "Sobytiya Kryma", summoning his mother for interrogations.

In Mykolayiv pro-Russian protestors grabbed journalists’ photo cameras and forbade to take photos of them, and a masked man threatened Oleh Dereniuha, an editor of the online news media outlet "NikVesti", with physical violence. Two men right inside the building of Mykolayiv Oblast State Administration attacked Oleksandr Vlashchenko, a journalist of the online media outlet "Novosti-N", and forced him to delete all the pictures from the camera.

In Sumy the car of Olena Adamenko, a journalist of the Sumy newspaper "Dankor", was burned down.

In Vinnytsia one of the builders rudely demanded that the journalist of the newspaper "33 Kanal', who was taking pictures of the renovation works, left.

In Dnipropetrovsk Maryna Davydova, an editor of the web portal "Dnepr", received threats in the Internet. 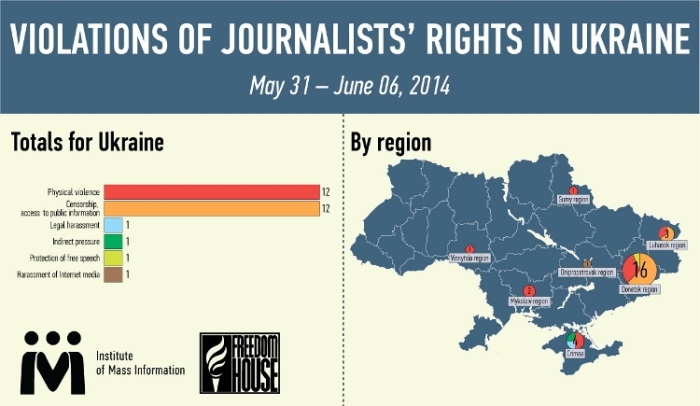