Ukraine: a number of violations of journalists' rights happened during the election process 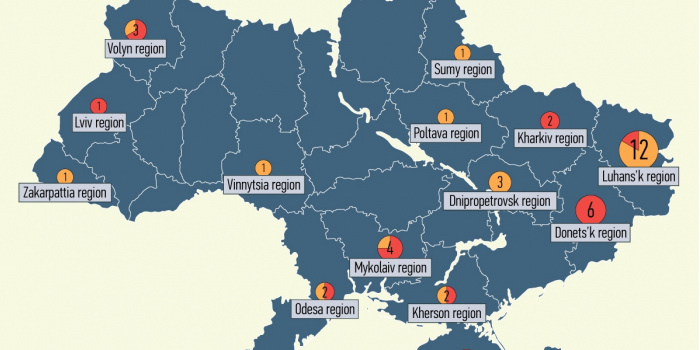 Between 24 and 30 May, the greatest number of violations in Ukraine was in the category "Censorship. Access to public information" – 22 cases and 19 cases of physical aggression towards  journalists.

6 cases of physical aggression towards journalists were registered in Donetsk oblast.

Near Slovyansk an Italian photojournalist Andrea Rocchelli and his interpreter were killed by mortar fire. Armed people stormed into the office of the TV channel "Union" demanding that they cover the activities of the Donetsk People's Republic. The separatists threatened the journalists from The Voice of America at the polling station. A French photographer and stringer, William Roguelon, was wounded by mortar fire. The correspondents of the TV channel "ZIK" had to leave the Donetsk main square where the pro-Russian rally took place because of threats. Oleksandr Tolstoguzov, a publisher and an editor-in-chief of the newspaper "Novosti Kramatorska" had to leave the region because of pressure and threats  from representatives of the so-called Donetsk People's Republic.

10 cases of censorship and abduction of two journalists were registered in Luhansk last week.

At the check-point in Shchastia city near Luhansk during the broadcast of the course of election process two journalists - Vyacheslav Bondarenko and a streamer Maksym Osovskyi were taken hostage by the terrorists. Valery Bolotov, the self-proclaimed governor of the Luhansk region, announced the shutdown of the TV and radio company "IRTA" in the region. The TV channels "1+1", "First National/ERA", Channel 5, Channel 24 (news channel), "112 Ukraina" and Channel 112 were switched off because of the threat of armed violence. The oblast association "Luhansk Cable Television" switched off the "1+1" TV channel from its network again. TV channels "ICTV", "STB" and "Inter" went off air.

3 cases of censorship towards the journalists were registered in Donetsk during the election process.

In Kharkiv in the office of the national TV channel "OTB" the light was switched off because of debts. As a result, the TV company went off air. The reporter of the TV channel "ZIK" was prevented from filming the rally against presidential elections.

In the Central district court of Mykolayiv a court administrator and members of the riot police "Gryfon" threw out the journalists Andriy Prokopenko from "Novosti-N" and Dmytro Bulash from "NikVesti". The commissioner of District Election Commission tried to prevent Nataliya Bielova, a journalist of the online media outlet "Korabelov.info", from video filming of vote count. Roman Babchuk, a journalist of the newspaper "De pravda", was turned out of the District Election Commission.

In Kherson assault and battery of Valentyna Krytsak, a blogger and an activist of the EuroMaidan, leaked out. An unidentified man tried to snatch out a camera of Kateryna Ponomarenko, a journalist from the Committee of Voters of Ukraine, in the building of Voter state register.

In the Crimea Tetiana Shtan, a reporter of the program "Facts of the weekend with Oksana Sokolova" from the TV channel ICTV, was detained by Russian border guards at the checkpoint on the border with the Crimean Autonomous Republic. Russian military men detained a personal correspondent of the TV channel "ZIK", when he was leaving the Crimea after filming.

In the city of Izmail, Odesa oblast, the office of the local newspaper "Sobesednik Izmaila" caught fire. The bloggers of the project "Great Odesa" were forbidden to broadcast online from the District Election Commission.

In Volyn oblast, Svitlana Demchuk, a deputy of presiding commissioner, didn't let the journalists of some newspapers work in the District Election Commission. In Lutsk an unknown woman attacked a camera crew of the TV channel "Avers" - a journalist Viktoriya Prytuliuk and an operator Nelia Prokopchuk. 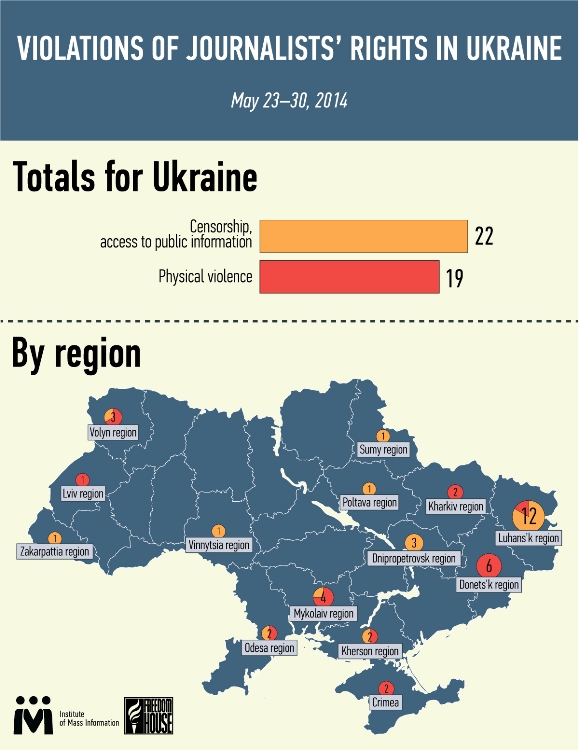