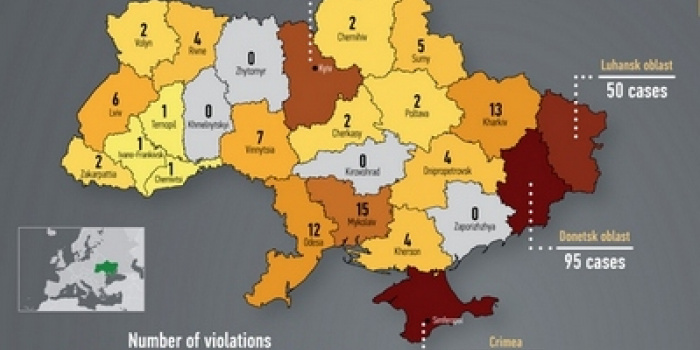 For the period since March 1 till June 10, 2014, in Ukraine 368 facts of violation of human rights have been registered, of them almost 80% are related to the actions of terrorists and to Russian aggression, which has been taking place in the East and in Crimea.

The main challenges for the freedom of press in Ukraine were:

– Disconnection of Ukrainian channels on the occupied territories, censorship – 88 cases

– Beatings and attacks against journalists – 87 cases

– Capture and attacks against offices of local media outlets – 43 cases

– Kidnapping and abduction of journalists – 46. 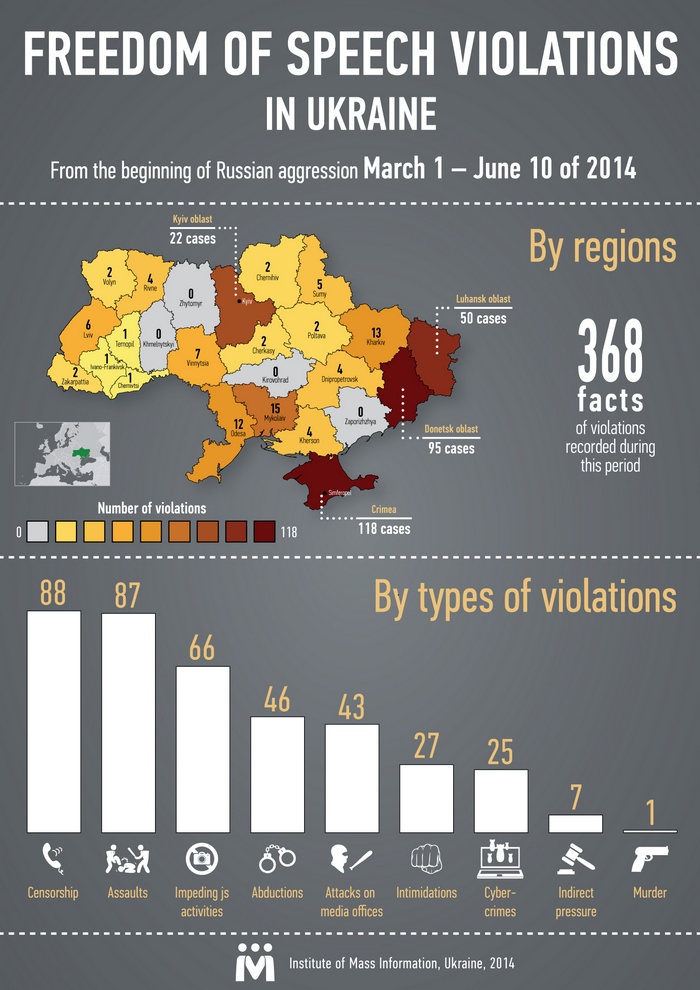 In May, for the first time in Ukraine an employee of a foreign media outlet covering the events in the East of Ukraine was killed – the Italian journalist Andrea Rocchelli  and his interpreter Andriy Myronov, who were caught in the area of mortar bombardment near Sloviansk.

The worst regions for journalists were Crimea (118 cases of violations), Donetska oblast (95), Luhanska oblast (50), and on the fourth place – Kyiv city (22 violations). The situation is alarming in Odeska (12), Kharkivska (13) and Mykolaivska (15) oblasts, as well.

At the same time, the Institute of Mass Information registered 4 oblasts of Ukraine, where no freedom of press violations were registered in the period mentioned above, these are Zaporizka, Kirovohradska, Khmelnytska, and Zhytomyrska oblasts. Ternopilska, Chernivetska, and Ivano-Frankivska oblasts had one violation each.

In May, there also were 7 cases of illegal arrests of journalists, of them five took place in Crimea, and were conducted by Russian enforcers. In particular, in Simferopol, a journalist Osman Pashaev and his Turkish cameraman Dzhengiz Kyzgyn were arrested, they were beaten, and their equipment was all taken, after this the journalists had to leave Crimea.

The Institute of Mass Information conducts all-Ukrainian freedom of press monitoring , using 15 media experts in the regions of the country, and based on the following categories: physical aggression, censorship and access to information, economic and political pressure, legal pressure, and cyber-crimes against mass media and journalists. The monthly report includes only the cases related to freedom of press and professional journalist activities.

Attempts to reorientate state-owned TV channels Dom and Rada are a backtracking on democratic reforms - Media Movement’s statement
News
Journalist Danilovych testifies that FSB officers beat and strangled her
Russian hacker group Sandworm launches ransomware attacks on Ukraine
The Old Lion Publishing House is re-issuing "Daddy's Book" by Volodymyr Vakulenko
Sarny City Council refuses to provide "Chetverta Vlada" with information on their top-ranking officials' salaries
Do you want to be first to learn about the new research of the Institute of Mass Information? Subscribe to the newsletter!