Research of the media situation of Dnipropetrovska oblast​ 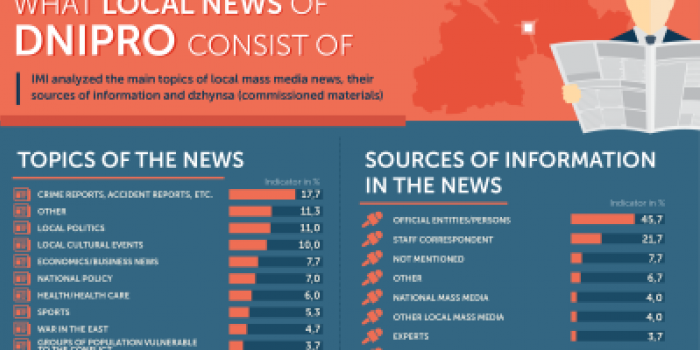 The media space of Dnipropetrovska oblast stays politicized and remains one of the most saturated with news about the conflict-affected groups of the population. For the second year straight, it stays an absolute leader in Ukraine by prevalence of covertly commissioned materials, or dzhynsa. The media network in the region is poorly developed compared to other regions of Ukraine, yet new independent media projects are gradually expanding in this oblast center.

In Dnipro, there are 7 functioning TV channels, 7 newspapers, over 10 active online media outlets.

During the year, a new online media outlet was launched — the website «49000». The website is said to be affiliated with the businessman Dmytro Pohriebov, the former deputy city mayor of Dnipro and now the mayor's political rival.

In spring of 2016, the city authorities approved a resolution about «revival of the municipal TV», namely, about financial support of the communal enterprise «Dnipropetrovsk State TV Studio», which, along with the private joint stock company «TSD» for over 20 years constituted the brand of the TV channel 34. At certain points in time, the owners of its shares were Oleh Tsariov (Party of Regions) and Mykhailo Sokolov (Yulia Tymoshenko’s Bloc). In 2010, almost 90% of its shares along with all main facilities of the TV channel were purchased by the SKM corporation. This way, one of the largest TV channels of Dnipro got under influence of Rinat Akhmetov. So, the communal enterprise headed by journalist Borys Brahinskyi, who is close to the city mayor, was renamed "Channel Dnipro". Today, «Dnipro» does not have a license for broadcasting, and can work only as a production studio. The product that the communal enterprise started producing, was evaluated by the local journalist community as biased. In 2016, 16 million hryvnias were earmarked for the communal enterprise, and in 2017, it will receive 7.7 million hryvnias from the city budget.

The startup project «Khronika» also ceased to function. The media was planned as self-sustaining, yet it failed to achieve the required level of self-funding. Instead, in January of 2016, in Dnipro an independent project of journalist investigations called «Buro» emerged. The project started as a private initiative of the local journalist Olha Yudina. Currently, «Buro» is working with the support of the Renaissance Foundation and is already looking for an additional author.

«Hromadske TV Dnipro», which has been working in Dnipro for the last three years, terminated its contract with the Kyiv-based NGO «Hromadske TV», which had some financial consequences for the organization, yet in the beginning of 2017, it launched its live program studio for the first time, with the support of the U.S. Embassy.

We should pay special attention to the media space of Kryvyi Rih, which is quite developed for a city with half a million of population. In the city, where traditions of Soviet-style censorship are still strong, commercial media outlets still seem to give a real alternative opinion. Two TV channels work here — the communal studio «Rudana», the city council’s official media outlet, and the private cable TV channel «Pervyi Gorodskoi», which is said to be affiliated with MP from Petr o Proshenko’s Bloc, Kostiantyn Usov. The newspaper «Chervonyi hirnyk» ("The Red Miner") is an official voice of the city council, and, sometimes, the only media that publishes the city-council-related news, because the local officials often just ignore representatives of other media outlets. «Domashniaya Gazeta» self-presents as a self-funding oppositional printed media outlet. One of its leading journalists Natalia Shyshka until recently was a member of the city council from the local branch of the Samopomich party. Two most visited local websites are «Pervyi Krivorozhskiy» and «0564», both are private-owned. In addition, the media platform «Expert-KR» works in the city, presenting itself as the first independent media outlet of Kriviy Rih. This media outlet was launched with the grant support from USAID. Yet, other local media outlets argue that the project started based on the initiative of the local political party «Syla Liudei» ("Power of people").

Most media in Kryvyi Rih are in Russian

In general, the media space of Dnipropetrovska oblast is quite diverse, if you can call the range of opinions of media outlets’ owners diversity. Here we have media that belong to the groups of Rinat Akhmetov, Ihor Kolomoiskyi, Viktor Pinchuk, those affiliated with the Vilkul family, and some media outlets that, when needed, broadcast the opinions of certain political parties and actors. Petro Poroshenko’s Bloc compensates lack of its own media outlets in Dnipro with a standard set of communal media outlets – though some of them are in transit from being state-owned, they still devotedly secure presence in the media space of the region for the ruling party's representatives. So, the media situation of Dnipropetrovska oblast can be accurately described as a permanent political struggle, with quiet and active periods taking turns. 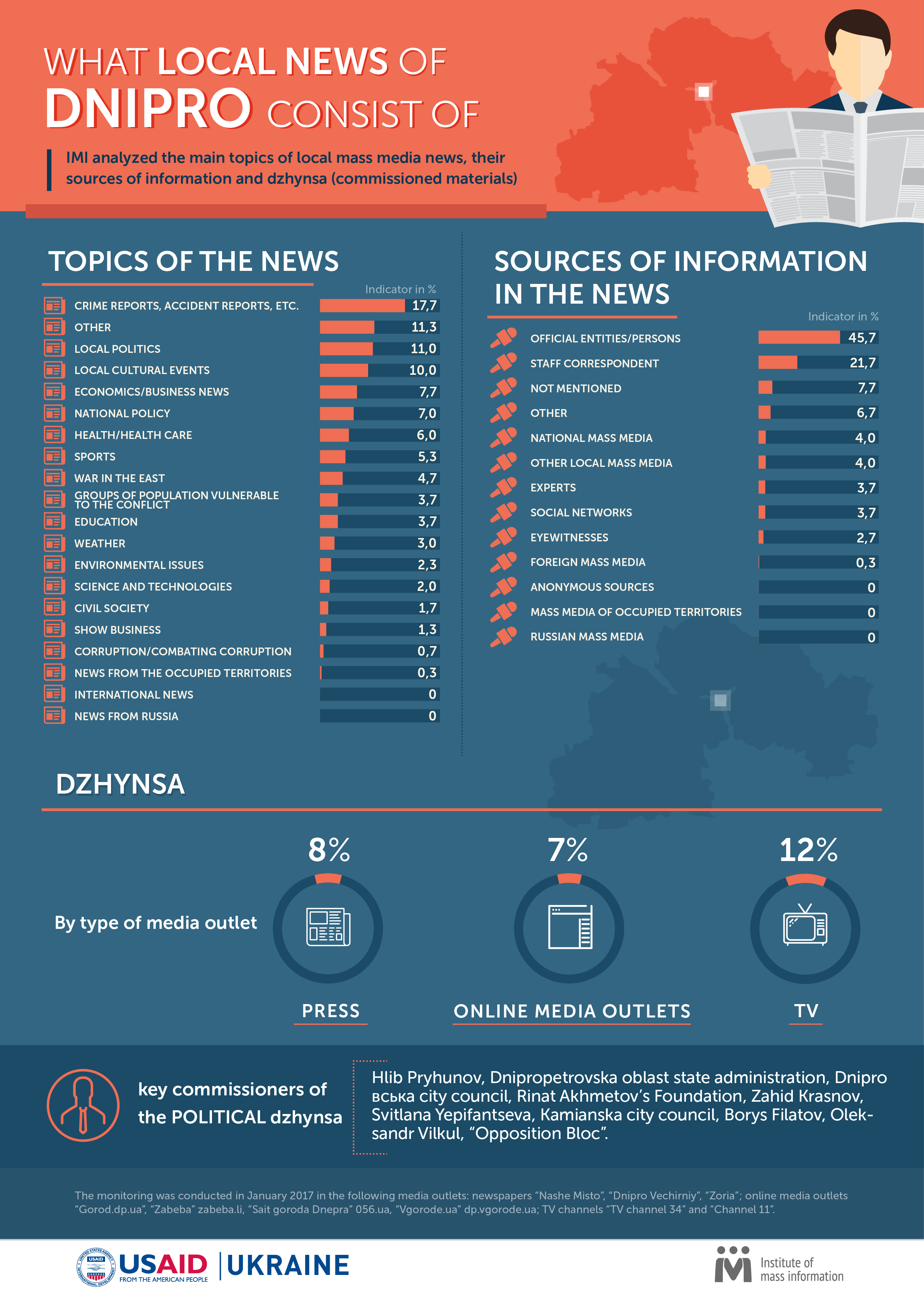 Based on the results of the monitoring, the most popular topic in the media outlets of Dnipro is crime reports, as well as various information about accidents (including traffic accidents) — they comprise 18% from all news. As IMI monitorings indicate, this tendency is typical for most Ukrainian regional media outlets.

Local politics is on the second place, the third place is held by the category «other news». As the monitoring was conducted on the third week of January, this category was filled mostly with various news describing how the city dwellers — from high officials of the city to ordinary Dnipro residents of all ages and with widely varying motives — were diving into local winter bodies of water as a traditional celebration of the Epiphany. Of course, January is also usually a «dead season» for news, yet some cases were bringing this to absurd levels. For example, in one of the news programs of the TV Channel 11, which consisted of 11 stories, three largest stories with stand-ups were dedicated to this religious holiday. Another significant chunk of stories in this category consisted of readers' letters to the offices of newspapers, and also poems, traditional folk recipes, and prayers. Such pieces fill 11% of the region's informational space. Which is, by the way, the same percentage as the news about the local politics.

10% is news of culture. Most often, those are announcements and placards of events to come, or official reports of administrations about the work they accomplished. Seven per cent from the total number of news in the regional media outlets  offer coverage of the national politics, and those are mostly dried-down reprints of official mails from oblast administrations (so-called "no-legwork news").

Also, in Dnipropetrovsk oblast, at the level of 4% of all news, the coverage of news about the conflict-affected groups of the population — IDPs, the military, and the families of those who perished – is on the same level as in Zaporizka and Donetska oblasts, and has the highest percentage indicator of all regions of the Southeast. Speaking about the quality component of the news of this topic, most often these news originated from governmental agencies and predominantly addressed local and oblast-level support programs for these groups of population. These topics are covered on a more in-depth level and comparatively consistently by Channel 11 and the newspaper «Nashe Misto». Channel 34 also regularly covers the life of IDPs and civilians in the «grey zone», yet it does it mostly through the prism of the Rinat Akhmetov Charity Foundation. What is not covered at all in local media outlets is international news and the news from the occupied territories.

The level of covert advertisement in Dnipro is the highest of all surveyed regions — 9 per cent of materials have markers of being covertly commissioned. And only in Dnipro we see the highest percentage of dzhynsa being on TV, and almost all dzhynsa on TV being political.

Among the regular customers of covert advertisement at Dnipro TV channels, we see the Rinat Akhmetov Foundation, which was already mentioned earlier: each issue of news at Channel 34 that was being monitored contained such material (and the same material, in the same day, was broadcast by the TV channel «Ukraina»). Also, Dnipro city councilmember Zahid Krasnov, who from time to time appears on Channel 11 and Channel 34, is among major dzhynsa beneficiaries in Dnipro.

It should be noted, though, that Channel 11 does tag the commercial advertisement properly: regardless of who sponsors its news, advertisement is tagged as required by the law — «Advertisement». Channel 34 broadcasts commercial information after the tag «Pressing», which is not a proper way to mark advertisement. Over one half of commissioned materials in printed or online media outlets are usually tagged with improper tags «News of the companies», «Point of View» or with the frank «For the Cash». We should add that out of all the media we surveyed, the only website that tags absolutely each of its commercial materials properly is the website "Vgorode". The newspaper «Nashe misto» tags most of its commercial materials properly, with the exception of political ones, which is typical for a city council newspaper.

As to the dzhynsa customers in newspapers and in online media outlets, the absolute leader of commissioning political covert advertisement is the chair of Dnipropetrovska oblast council Hlib Pryhunov. Whether the oblast council recommends to publish some press release and the newspaper has no actual option to refuse, or the editorial office takes on the job of helping the chairman of the oblast council with his reports, the result that turns out is always the same — Hlib Pryhunov personality cult. Based on the sheer frequency of being quoted, even without any real reason, by the newspapers and websites of Dnipro, the chairman managed to get ahead of both the city mayor Borys Filatov and the oblast administration taken together. In total, the ratio of commercial and political dzhynsa in Dnipro is almost half to half — 48 and 52 per cent, correspondingly.

The main sources of information for the journalists of Dnipro, just as is the case for most Ukrainian mass media, is official structures and officials. 46% of news is reprinting/re-broadcasting of reports, press conferences, and press releases. Correspondents find information on their own only in 22% of cases. 8% of materials do not have references to the sources of origin. By the frequency of quoting, social networks have already caught up to various actual experts — each of these categories of sources is quoted in 4% of news. Eyewitnesses become the original sources only in 3% of cases, and this is a telling indicator for media outlets’ closeness to their audience.

Foreign media outlets, including Russian, anonymous sources and media outlets of the occupied territories, according to the monitoring, never become sources of information for the journalists of Dnipro.

STATE INSERTED IN “ENVELOPE" ONCE MORE, NOT IN SMARTPHONE?
News
Lutsk journalist's car set on fire
Court ordered operators to unblock "Glavkom" site
In Cherkasy region, journalists not allowed to attend meeting with mayor
U.S. denounces crackdown on 'independent voices' in Crimea after RFE/RL freelancer targeted - RFE/RL
Want to learn first about the new research of the Institute of Mass Media? Subscribe to the newsletter!