Research of the media situation in Zaporizka oblast 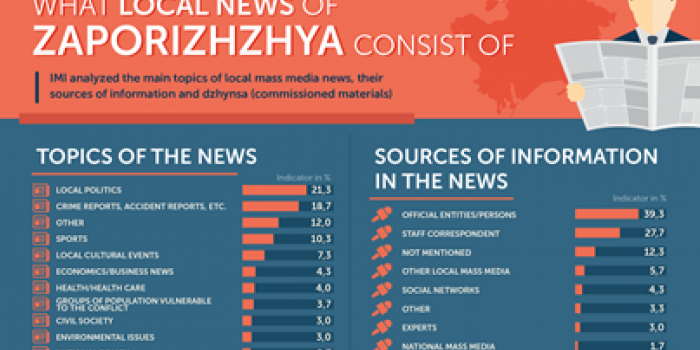 By the beginning of 2017, media of Zaporizka oblast sustained certain losses. In particular, during 2016, the region lost several oblast weekly and daily newspapers. Officially, according to the data of Zaporizka Oblast Department of Justice, by May of 2016 in the oblast 600 periodicals were registered, fewer only by two compared to the previous period. But in the oblast center itself, Zaporizhzhia, during the last year, there ceased to exist, predominantly due to financial reasons, a weekly newspaper «Industrialne Zaporizhzhia» (and left behind a weekly «Panorama») and the market’s leader, weekly «Subota Plus». Earlier still, there disappeared weekly newspapers «Prav.Da», «Ostrov Svobody», and «Mriya». As a result, in the oblast center only no more than five-seven significant newspaper brands are still operating: «MIG», «Panorama», «Zaporizka Sich», «Zaporizka Pravda», «Pozytsia», «Verzhe», etc.

At that, periodicals from regional media holdings and community-owned media are still standing tall: in Berdiansk, they are «Berdianski Vidomosti» (media holding «PRO-Berdiansk») and the community-owned newspaper «Pivdenna Zoria», which is currently transitioning from the state ownership. In Melitopol, these are the newspapers of one of the most prominent companies in the region, «MV-holding » (MV).

In Zaporizka oblast, according to the data of the National Television and Radio Broadcasting Council of Ukraine, 22 TV organizations with the legal address on the territory of the oblast have licenses: one TV company is state-owned, three — community-owned, and 18 are owned privately. Nine TV companies broadcast on air and the rest are cable or IPTV. Several cities of oblast subordination have their own TV channels: two in Melitopol, private PJSC TV and Radio Company «MTV-plus» and «TV Melitopol»; in Berdiansk — the community-owned TV channel «Berdiansk»; in Prymosrk (city of rayon subordination), LLC «TV and Radio Company “YUG”» is registered.

Although, according to the official data of the State Statistics Service of Ukraine as of 2001, according to which the Ukrainian language was listed as the mother tongue to 50.2% of the population of the oblast, most media are Russian-speaking. Content in Ukrainian is available on two TV channels: the regional branch of the Public TV and Radio Company of Ukraine and the online TV channel «Hromadske. Zaporizhzhia». Among the printed media, the Ukrainian language, in particular, is used in the community-owned «Zaporizka Pravda» and «Zaporizka Sich». Among the online media, the predominant majority is in Russian, with the exception of Zaporizhzhia-based «Depo. Zaporizhzhia» and «Nashi Hroshi. Zaporizhzhia», and to some extent — Regionnews, «Porogi», etc.

In general, the region is manifesting two trends: gradual transition of media to online forms with reducing of traditional media outlets (in particular, newspapers and radio) and aggregation of media groups subordinated to a concrete political or business influence. Currently, the most noticeable influence over media is exerted by the management of the Private Joint Stock Company «Zaporizhstal»; the head of the oblast state administration Kostyantyn Bryl is expanding his media potential, as does, separately, the head of the oblast council Hryhoriy Samardak; the head of the Joint Stock Company «Motor Sich» Viacheslav Bohuslayev keeps enjoying a powerful influence over media of different types.

At that, the share of materials covering local politics appeared to be rather similar in all kinds of observed media almost: in newspapers and TV — 23% in each category, and online media outlets — 18%. It should be pointed out that the monitored media included, in particular, a TV channel (TV-5) and a newspaper («Panorama») that belong to one and the same area of influence of the PJSC «Zaporizhstal» and the city mayor Volodymyr Buriak, and often they use similar news opportunities that their journalists cover. Still, all other local media outlets showed their preoccupation with the topics of local authorities, as well.

A significant gap in interest to crime news emerged between newspapers and online media outlets: in three periodicals, there were only 6% of materials about crime or emergency situations, and in online media this share was as high as 31%. The largest share of crime news was observed on the website «Reporter UA» (47%, almost one in every two news stories), and the smallest — on the website misto.zp.ua (6% from the total number of materials). In TV news, the largest share of crime news was observed in the news on the TV and Radio Company «Aleks» — 95% from the total number of all crime news on each of the TV channels and the total of 19% of crime news out of the entire corpus of materials on the two TV channels.

The category «Other» was swamped with a large number of materials, which, in particular, covered the celebrations on the Epiphany: each media outlet had several news or stories before, during, and after the holiday. Besides, under this category, we classified the news from TV-5 that were shown in the end of each news broadcast and told interesting and entertaining stories about people with peculiar hobbies or animals in an unusual circumstance or doing something unusual. «Sports» and «culture» did not exceed 10% and 7%, correspondingly; on average, two per cent of attention each got such topics as «show business», «education», and «war in the East».

The least popular among all kinds of media — not a single news story — were the topics on science and technology, as were the news from the occupied territories and from Russia. The least popular two, overall, follow the same tendency observed in media outlets in other regions, in particular in Dnipropetrovska, Odeska, and Khersonska oblasts.

The environment is discussed in 3% of the news, while being slightly more popular (4%) — in press, and less popular (2%) — in online media outlets.

While there are no elections in the near future, political dzhynsa, mostly, keeps appearing in periodicals. For instance, in Zaporizhzhia newspapers 8% of materials manifested markers of being covertly commissioned, and of them a half was political dzhynsa. The largest share of politically biased materials was published in the weekly «MIG»: eight materials against four in two other media outlets. But it should be mentioned that, for instance, in the newspapers «Panorama» and «Zaporizka Sich» most texts usually cover positive achievements of the local Zaporizhzhia authorities and Public JSC «Zaporizhstal», which, on the one hand, is a component of the editorial policy, but, on the other hand, gives the audience positively biased information about the activities of Zaporizhzhia local authorities.

Overall, during the monitoring period, Zaporizka media published about 6% of materials, which manifested markers of being covertly commissioned. This indicator is the fourth largest among the eight regions we monitored.

Online media seem to have a special affinity towards the official sources: 46% of their materials are based merely on such sources. The largest share of such news was observed on the website «Reporter UA», almost 68% of news from the total number of texts published on this outlet. TV has 39% of «official» news, and periodicals — 32%.

Nevertheless, a reassuring indicator is the share of the media’s own materials: they constitute the largest share on TV — 43%, and the smallest one, online — 16%.

Unidentified sources appeared most often in periodicals — 13%. Probably, this may be connected to the style of texts or editorial policy not to use names of authors under the news. Still, in online media this indicator of unverified news is more than one half lower and constitutes only 6 %.

It is noteworthy that the increase in instances of using social networks as sources of information is becoming a trend: while in periodicals and on TV, they are used in no more than one per cent, the online media outlets are engaging them of a wider and wider scale, and currently the share of such news constitutes 6%.

STATE INSERTED IN “ENVELOPE" ONCE MORE, NOT IN SMARTPHONE?
News
In February, five journalists injured - Freedom of Speech Barometer
Parliament Committee didn't penalize MP Kyva for foul language towards journalist
RFE/RL correspondents attacked in Dushanbe while reporting on gas price hikes - RFE/RL
Odesa journalist seized court for restrictions on access to regional aministrative bodies
Want to learn first about the new research of the Institute of Mass Media? Subscribe to the newsletter!