Research of the media situation in Odeska oblast 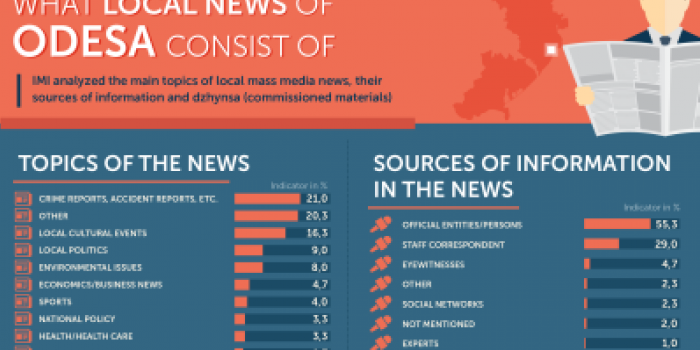 A little over two million people reside in Odeska oblast. This modest population has over thirty regional TV companies operating, and about fifty news websites, as well as several hundreds of officially registered printed media outlets, of which only about twenty are really published. These indicators are the highest among all regions of the country.

The media environment of Odesa is heavily overloaded, and this creates a pretext for reduction of quality of the news materials, decay of journalism standards, in favor of political manipulations and increased amounts of dzhynsa in the region.

One of the reasons of such diversity, according to the researchers, is that often the behind-the-curtains owners are reluctant to part with their comparatively inexpensive assets. In addition, the situation had historically formed in Odesa with no single dominant political or economic group.

In Odeska oblast, in the last decade over ten comparatively strong, by local standards, financial and political associations have established themselves. Some of them are affiliated with various financial groups of the national scale. At that, unlike in other regions, especially unlike in Donbas, this diversity was not destroyed in the course of economic or criminal conflicts. Correspondingly, each of these groups has its own media outlets. As a result, the local media market is greatly oversaturated, and media outlets are in fact unable to compete with each other in any meaningful way.

In 2016, the number of TV channels did not change. Their owners also remained the same.

In the fall of 2016, eight rayon newspapers of Odeska oblast began the process of transiting from state ownership to communal ownership. The newspapers «Krasnooknianskyi visnyk», «Visti Kodymshchyny», «Novyny Frunzivshchyny» (urban-type village Zakharivka), «Chas. Liudy. Podiyi» from Sarata, «Slava Khliborobam» from Dobroslav (formerly Kominternivske), «Artsyzki visti», «Naddnistrianska Pravda» of Ovidiopol and «Tatarbunarskyi visnyk» were left without governmental funding. The number of copies for each of the mentioned above rayon newspapers of Odeska oblast does not exceed at average 3,000 copies per months, yet they still have some influence on the residents of their local communities.

On local TV channels, over 50% of weekly news issues are in Ukrainian, yet other programs are mostly in Russian.

As to the press, the great majority of newspapers is published in Russian, only two newspapers are published in Ukrainian (namely, «Odeski Visti» and «Chornomorski Novyny»). Other media outlets sometimes publish materials in Ukrainian, but do so irregularly. In the region, there is a newspaper published in Bulgarian — «Roden Krai».

Over 90% of websites provide information in Russian. 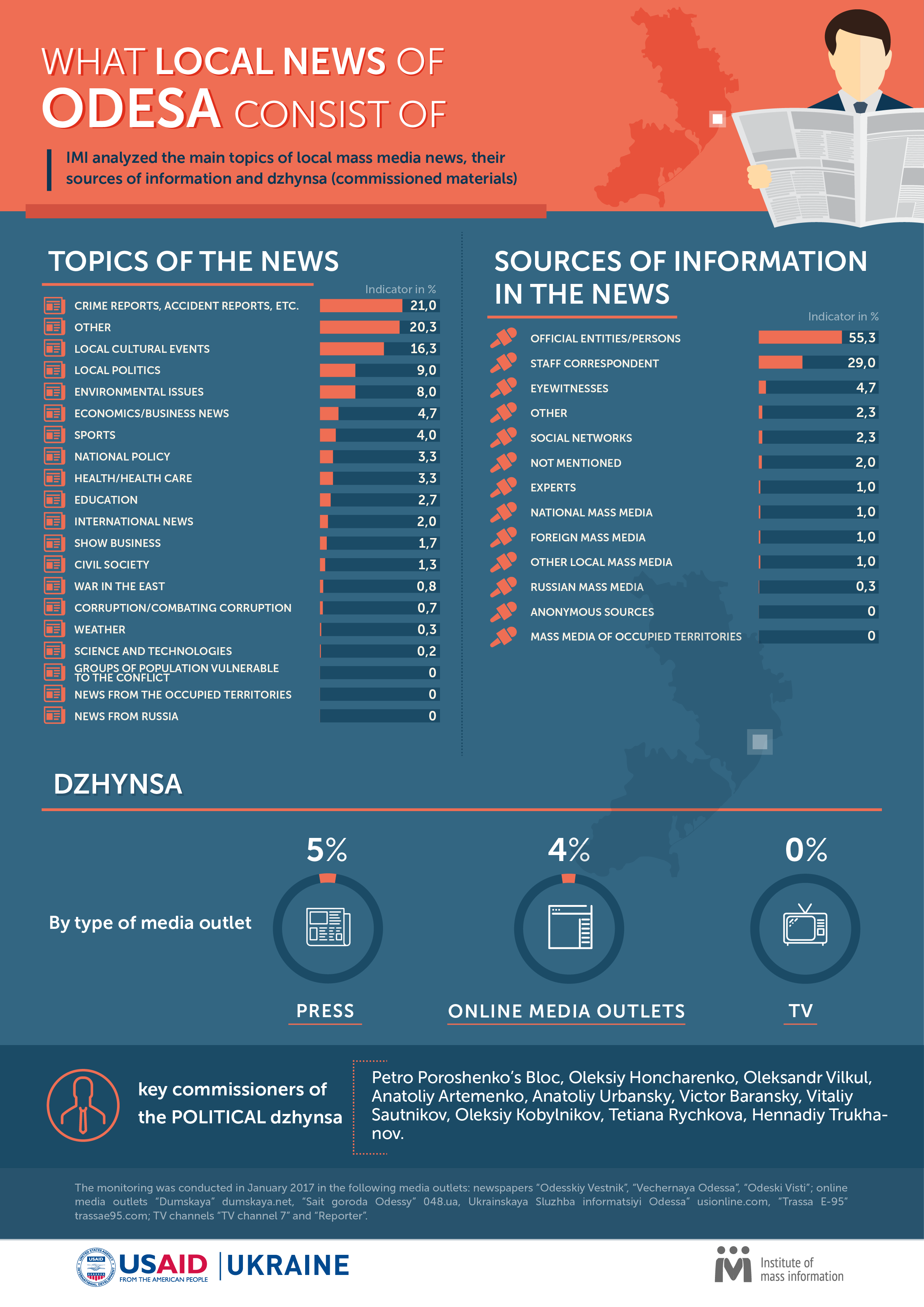 Odesa local media outlets show a surprising dynamics in the topics of their materials. The topics the local journalists address most are crime and accidents reports (21%) and regional cultural events (16%). Only 9% of news are about local politics. It should also be mentioned that printed media outlets try to avoid covering topics related to accidents and emergencies, and prefer to publish more culture-related materials.

The media outlets of Odesa are in fact not interested in national politics, education, and combating corruption. Regional media outlets failed to establish an effective connection with the local civil society, which continues to live as an entity in itself. There are practically no news about various civil society initiatives; data from NGO research and monitorings are published rarely, if ever.

The media outlets of Odesa also ignore the topic of the armed conflict in the East. This topic is covered only in 1% of the total number of materials.

In spite of hosting over 30 thousand IDPs in the region, local media do not pay any attention to the problems of these people, who found themselves in a difficult situation and require support. The number of materials about life of IDPs in Odesa is close to zero.

In Odeska oblast, they practically never write about the economy or the sports. The crisis in the country forced most editorial offices to close down some of their specialized departments. Only several local media outlets can afford having sports reporters. In the city with one million people of population, there are practically no professional economic commentators. News about the economy are just retelling of opinions of experts or statistical indicators from departments and local authorities.

In Odesa, there was lately quite a lot of materials covering the environment. The frosty winter blessed the local photojournalists with beautiful vistas of frozen sea, scenes of winter beaches and recreational locations.

An important problem of the media market of Odesa is allocation of materials that are most likely commissioned without any tagging, or without the proper tagging. Advertisement needs to be clearly marked and separated from other information, regardless of forms and means of its distribution, so that it could be identified as advertisement. That is, such material needs to be located under the tag «Advertisement» or «Sponsored feature». This is an important thing to mention, because some websites and printed media outlets of Odesa tag their commercial ads with their own tags, for example: «News of the companies», «Health of the Odessites», «Politics», etc., which is in violation of the law.

The results of the monitoring indicated that 4-5% of materials in printed and online media outlets had markers of dzhynsa.

Due to extreme bloating of the media market of Odesa, there is lack of advertisement opportunities and customers willing to advertise their products. With normal advertisement becoming so rare that local media outlets do not even try to compete for it, they seek sponsors in political or commercial segment willing to publish covert advertisement. This way, the mass media become dependent on such sponsors and this hinders development of independent media outlets and impairs coverage of local topics.

The monitoring discovered that in Odesa media outlets there is more commercial dzhynsa than political; yet, allocation of commissioned materials in local media is not systematic and depends on the periodic demand from political actors with certain interests, or small-scale commercial structures.

Online media outlets of Odesa are buried under reposts and rewritten press releases. Only 18% of news are created by their own correspondents. In traditional media outlets, there is twice as much unique content, and they do not use informational materials from other local media in their work. National media outlets become sources for the journalists of Odesa only in 1% of cases.

In total, 55% of local news are press releases of local agencies and governmental structures or statements of officials. Most of these materials have headings of a similar type. The same text and photo materials appear in different media outlets. This is particularly pertinent to statements from the local patrol service, the State Emergency Service, and the press service of Odesa City Administration.

Editorial offices of Odesa mostly do indicate the sources of information and acknowledge the authors in articles and news; they also try to avoid using unchecked or anonymous sources.

STATE INSERTED IN “ENVELOPE" ONCE MORE, NOT IN SMARTPHONE?
News
Police probe in 11 crimes against journalists since beginning of the year
Court ordered Medvedchuk to pay almost 140,000 hrvivnyas to “Vivat” publishing house
Trump tweets can't be brought back to life on Twitter - BBC
RFE/RL denounces latest Kremlin efforts to force RFE/RL out of Russia - RFE/RL
Want to learn first about the new research of the Institute of Mass Media? Subscribe to the newsletter!