Research of the media situation in Kharkivska oblast 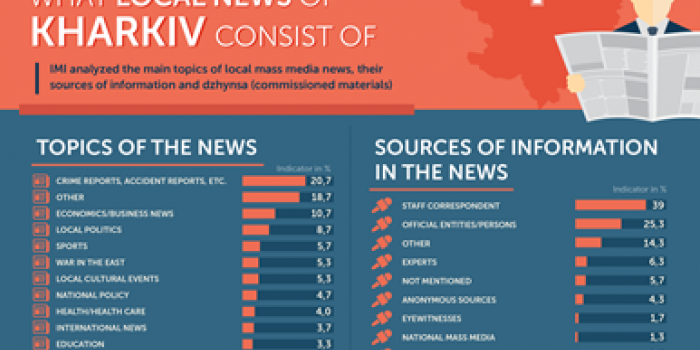 Absence of funding and search for new ways and forms — this would be an accurate description of the trends of 2016 for Kharkiv media outlets. Since the time of our previous research (March 2015), in Kharkiv two TV channels, «Fora» and «Favoryt», ceased operating in the end of 2015, and in 2016 — several more regional TV and Radio Companies did so, too.

No new radio stations emerged in Kharkiv in the last year, so currently only one radio station is working properly — Kharkiv Oblast Radio, which now has its own page on Facebook. The radio offers news and programs on culture for 2 hours daily on the frequency of the Ukrainian Radio-1. The director of the creative union «Oblasne Radio» Roman Kryvko hopes to expand to 4 hours a day, but it will depend on the license they will receive in April of 2017.

The former Kharkiv Olbast State TV and Radio Company officially received the status of the Branch of the Public Joint Stock Company «National Public TV and Radio Company of Ukraine». Due to the new vision, it has launched several new TV projects oriented towards the local community and aiming to address socially relevant topics. The staff of the TV and Radio Company is working under the constraints of shortage of funds (for instance, they can allocate only several liters of gas per day for the news crew) and technical limitations (obsolete TV equipment). The news TV program «Kharkovskiye Izvestia», besides the traditional promotion of the local authorities, has begun to vigorously cover the activities of the new head of Kharvkivska Oblast State Adminsitration Yulia Svitlychna. Because of low salaries, during 2016 the communal enterprise «Kharkovskiye Izvestia» lost 22 employees, who, according to the director of the communal enterprise «Newspaper “Kharkovskiye Izvestia”» Mykola Kosyi, to higher-paying jobs elsewhere, in particular, in all-Ukrainian media outlets.

The situation with printed media outlets has not changed much. Since February 2016, the newspaper «Kharkovskaya Nedelia» (believed to have ties to «Samopomich») returned. Some changes happened in other media outlets: after the new year, the newspaper «Slobidskyi Kray,» instead of three issues a week, switched to two. The newspaper is actively participating in grant programs and developing its online version. It offers progressively more analytics, but still pays a lot of attention to the regional authorities, for instance, publishes congratulations from the heads of Kharvkivska Oblast State Administration and Kharvkivska Oblast Council. Since the new year, the newspaper «Vechirniy Kharkiv» reduced its staff: now it has two journalists instead of four.

The local online media were recently joined by several new media outlets. In 2015, a new website — «Gorod Х» (gx.net.ua) was launched; this website, according to our data, belongs to Mykhailo Dobkin’s former press secretary Victoria Marenych. It positions itself as independent from political forces, but differs from other news websites in offering significant numbers of «fiction» materials: according to the local journalists, many stories on it are plain fabrications.

In February 2017, the Kharkiv section of the website kharkov.vlast.ua was launched. It offers rewritten and original news as well as small journalist investigations.

The online news media outlet «Spravzhnia Varta» changed the website’s design, which, according to its editor’s data, improved its popularity (the number of views has gone up), and «Status Quo» expanded its geography — now the website offers news from Lviv and Poltava, too. The staff of «Nakipelo» (NGO «Kharkiv Crisis Infocenter») is actively experimenting with new projects and formats: they started publishing longreads, TV projects, caption videos, and articles on explanatory journalism.

The predominant majority of Kharkiv media outlets is Russian-speaking, and the Ukrainian-speaking ones are few: traditionally, it is the TV channel «OTB», Kharkiv Oblast Radio, the TV news «Kharkovskiye Izvestia», the newspaper «Slobidskyi Kray», the news website «Spravzhnia Varta»; also, the TV project from ATN «Otrazheniye-Viddzerkalennia» is conducted in two languages, depending on what language the program guests speak. Also, «Hromadske. Kharkiv» in communities and public groups in social networks publishes its news in Ukrainian. The online media outlet ‘Informational Agency Kharkiv Today’ became rather active; this one is believed to have ties to the political party «Samopomich» and businessman V. Kozhemiaka.

A lot of editorial offices are currently discussing new projects and opportunities to escape «poverty». We are of the opinion that examples of other successful local media outlets give reasons to believe that regional media outlets do stand a chance. 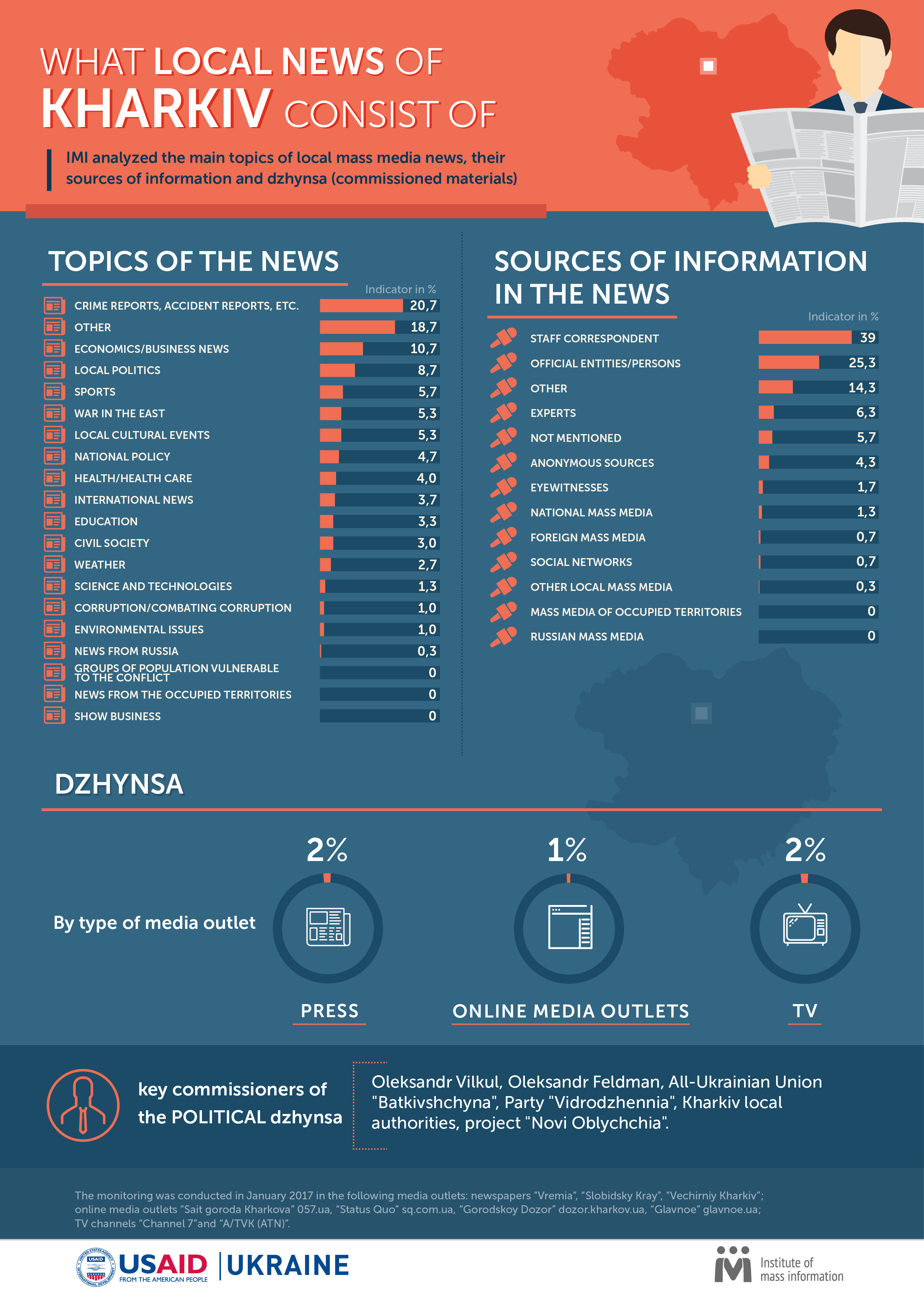 During the monitoring period, the largest share of news about crime was observed in online (33%) and television (22%) media outlets, in the printed outlets this share was 7%. Local politics, like decisions of regional and local significance, implementation of orders of the head of Kharkivska Oblast State Administration and his reporting, was most often addressed by journalists on TV channels — 16%, while in online outlets these news constituted 6% and in printed media — 4%. Materials about national politics were most often observed in TV news — 7%, less often in printed news outlets — 5%, and the least this topics was addressed in online media outlets — 2%.

Economic news enjoyed a similar degree of interest from all kinds of media outlets, with TV journalists getting somewhat ahead — 13%, in online outlets — 10%, and in newspapers — 9%. The monitored media outlets differed greatly as to their attention to international news: from 0% in TV news and up to 10% in newspapers, and 1% — in online media outlets.

The topic of the war still stays relevant for Kharkiv editorial offices. Journalists addressed the issues of the military draft, the army armaments, news from the front line, as well as the after-war life of the veterans. The largest share was recorded on TV and in online media outlets — 7% in each category, and in printed media outlets — 2% (but here these are usually extensive materials, portraits). During this period, there were no materials about internally displaced persons, although the topic of IDPs is still relevant for Kharkivska oblast. There were no news from the occupied territories, either.

The monitoring has shown for the second time already that the topic of the environment is of little interest for Kharkiv media outlets. On TV, this topic was not addressed at all, and barely mentioned in newspapers — 1% and online media outlets — 2%. Local cultural events, like exhibitions or theatre performances, enjoyed most attention in TV news — 7%, online — 6%, and in printed press — 3%. Although, the sheer number does not equate with quality. In newspapers, unlike in other media outlets, these are extensive interviews with artists, reviews of performances, and art critique. During the monitoring, show business was the topic of only one material. Sports news most often appeared in printed press — 10%, while in online media outlets is was 3%, and on TV — 4 %.

Kharkiv is traditionally called the capital of science but science here rarely makes news: 1% of materials about science and technology was observed both in TV news and in online media outlets, and 2% — in newspapers. The weather, which due to the frosts and heavy snowfalls during the monitoring was popular among the local residents, was addressed in the news in all monitored media outlets: 3% from all materials — both in TV news and in press, and 2% — in online media outlets. We classified a large number of materials as «Other» — these included advice, announcements, notifications, historic retrospectives, and special events from the editorial offices. Such materials appeared most prominently in printed media outlets — 32%, in online outlets — 18%, and the smallest share of them was observed in TV news — 6%.

Despite absence of any elections in the near future, we still observed covertly commissioned political materials as well as commercial ones. The largest share of such materials was found in printed media outlets and in TV news «Kharkovskiye Izvestia» — 2% in each category, and in online media outlets — 1%.

Among those who commissioned commercial dzhynsa, were: café «Krystal», «Megabank», services of a Kharkiv-based make-up artist, services in design («PopArtBox») and financial services (company «FreshForex»).

Such materials were not tagged as advertisement, covered the events or the story protagonist one-sidedly, had no socially relevant information or were tagged «Company News».

The sources are not referenced most often in printed media outlets — in 9% cases, in TV news — in 5% of materials, and least often (3%) — in online media outlets. Under this category, we also counted reprinted materials in newspapers, which did not specify where the material was reprinted from. The anonymous sources are quoted most often in online media outlets — in 10%, in printed press, only in 3%, and never on TV. As anonymous, we categorized the materials, in which the journalists do not name a concrete person or organization and instead quote some unspecified persons, for instance: «as we were told at the station», «on the plant », «according to the employees», «in the tax agency».

As other sources of information, we classified event participants, who are neither official sources or experts. This category was most often observed on TV — in 27% of materials.