Research of the media situation in Donetska oblast (Mariupol, Kramatorsk) 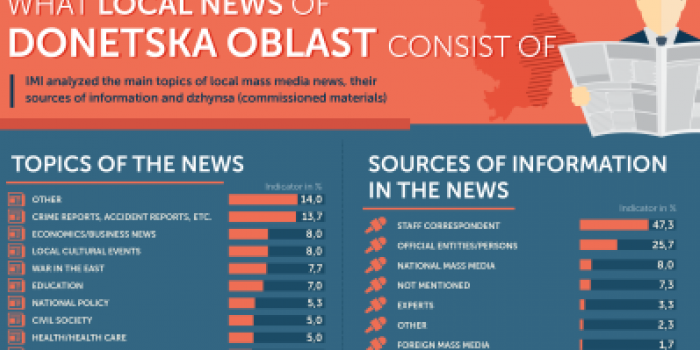 Ukrainian-speaking periodicals of Donetska oblast look more like Soviet-times self-published dissident papers, they do not have influence on the audience and are poorly funded. Talks about repressions against the Russian language in the Donbas territories that are controlled by Ukraine are mere manipulation, as finding a newspaper in Ukrainian, for instance, in Mariupol, is simply impossible: they do not publish local ones and they do not bring any from the capital. For the entire half a million strong city, the only website in Ukrainian is the Hromadske TV Pryazovia. One out of the three TV channels of Mariupol — MTV — produces several news issues a week in Ukrainian, yet only the anchors in the studio speak Ukrainian, and the stories and reports are still in Russian.

The network of local radio stations is poorly developed. Regional radio stations became branches of national music radio stations as far back as in the early 2000-s. Now, those are predominantly national chain network music formats. Long waves and FM are used by the municipal «Radio of Pryasovia» (Mariupol) and the oblast branch of the National TV Company of Ukraine «Radio Donbasu» (Kramatorsk).

Most local media are owned by Rinat Akhmetov's «Metinvest». This also is the difference of Donetska oblast from other regions of the country, where competition between different owners still existed — in Donetska oblast, the prevailing number of media outlets in fact follows the same “party line”, although they claim to be «independent» media outlets. Earlier, the informational policy was controlled by the Party of Regions headquarters, and now the local media outlets are guided by their owners, who are former Party of Regions members.

Another thing different about Donetska oblast compared to other oblasts of the country is a great number of media outlets in rayon centers and towns. For instance, virtually in each city of the oblast there are 2-3 local TV channels that exist with the support of the former Party of Regions members,  and each rayon center has 8-10 weekly periodicals. Such high saturation with media outlets can be explained with high industrialization of the region.

The media sphere of Donetska oblast is actively developing — the hostilities in the region caused the need to be constantly aware of recent events. Also, as the community's life invigorated, the need emerged to cover the activities of proactive individuals. Journalists of national and foreign media outlets are frequent visitors in the region. 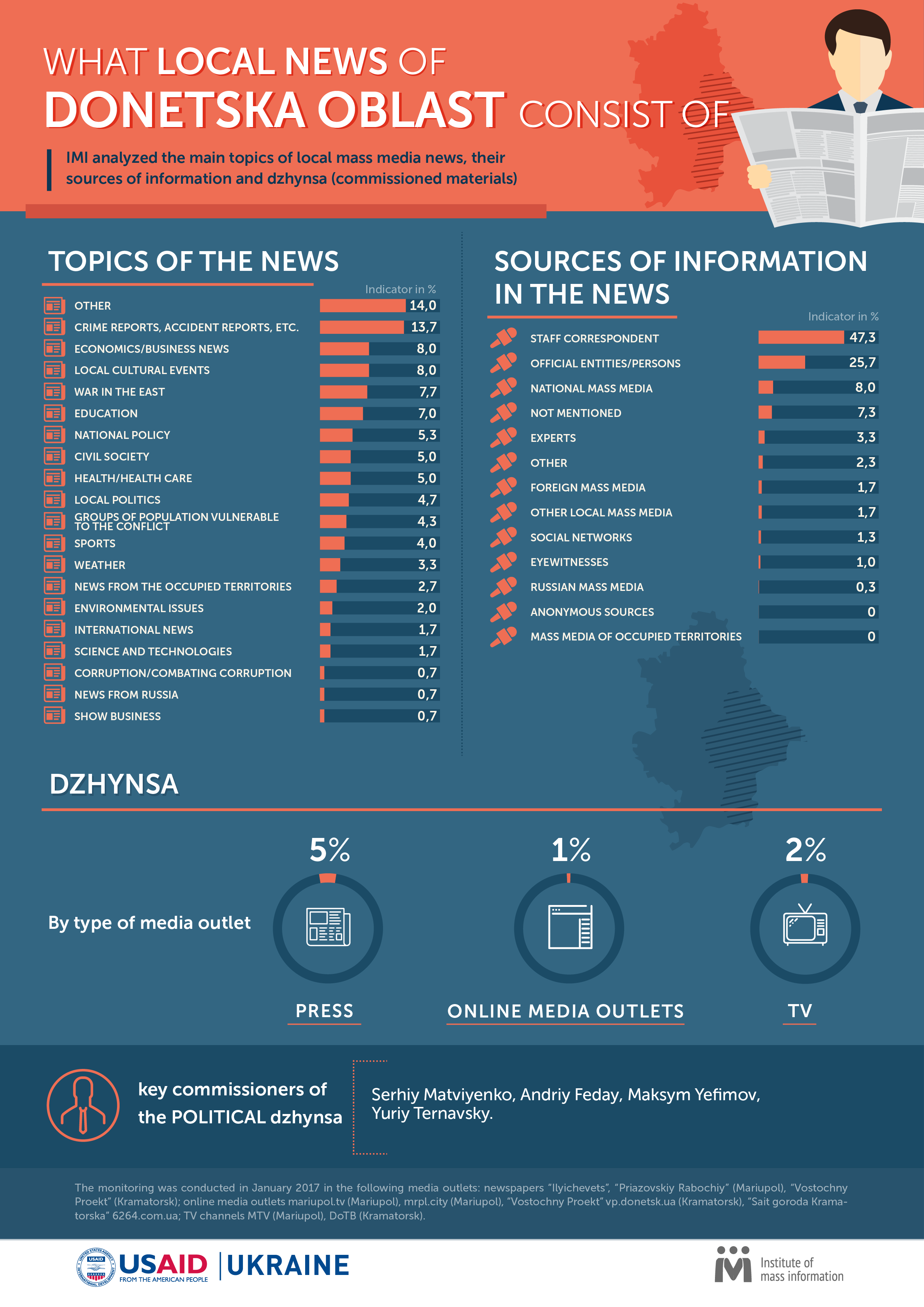 In local online media outlets, the most popular topic is crime, accidents, and traffic accidents — 26% of news. In periodicals, the largest share of news was about sports (11%), and on TV — about education (13%).

Concerning the topic of war, there is definite lack of such news, especially latest updates about bombardments. As both Kramatorsk and Mariupol are very close to the frontline. In some places, the distance to the positions of the so-called «DPR» is mere 15 kilometers. Almost each day, Mariupol hears the sounds of war and severe bombardments, and the suburbs may be under shelling, but nobody is doing urgent information updates — whose artillery is firing? Where is it going on? Who is under bombardment right now? Is the city in immediate danger? — The local residents do not have answers to these questions.

The information does appear after the event, when it is not so useful. Local websites, for instance, 0629, are trying to somehow address these information gaps, but are doing so only by using social networks. What they do is they take posts by local residents and prepare short updates, which fail to give necessary answers and are not a reliable source. To some extent, this issue could have been addressed with the help of TV, and the so-called scrolling text (on the bottom of the screen), and information could have been obtained by a journalist on duty from the ATO press officer or from their own sources (volunteers, or through personal connections with the military that almost every journalist now has developed).

The share of news about was constitutes: in printed media outlets — 6% (out of three newspapers that were monitored for two weeks, one never published news about the war, this was «Vostochnyi Proekt»). In online media outlets, this share is 12% (and the same situation — one of the websites was silent about the war, it was the website of « Vostochnyi Proekt» vp.donetsk.ua). On TV — 5% from the total number of news (MTV did not have even a single news story about the war; this share was reached  thanks to the oblast TV channel «DoTV»).

As a matter of fact, in coverage of the topic of war, the TV journalists of Donetska oblast were left behind by the peaceful and relatively remote from the armed hostilities Mykolayiv: on its local TV this topic gets 9% of the content. And periodicals on the frontline Severodonetsk in Luhanska oblast show no interest whatsoever in the topic of war — 0%, but do love themselves the topic of local politics, the highest share  — 33%.

For Donetska oblast, the topic of the environment and its protection is not very popular, despite being of utmost importance. Printed media outlets addressed this topic in 3%, online media outlets — in 1%, and TV — in 2% of their materials. There is an obvious explanation, why this topic is rarely mentioned: the corporation Metinvest, which owns most of the media outlets in Donetska oblast, is, in fact, the main polluter. And if the topic of the environment is addressed, it either happens in materials not about metallurgical complex enterprises, or these news offer an upbeat tone, or are commissioned and laud the “environmental achievements” of the top management of the metallurgical combines. As a rule, these «achievements» are nothing more than long overdue modernization of the obsolete manufacturing, which would not have happened were it not for the insistence of the citizens.

The similar share of attention is devoted to the topics of civil society — which is 3% in newspapers, 4% — in online media outlets, and rather higher in comparison on TV — 8%. Usually, these materials cover the issues of condominiums, where people rally around communal issues, and news about work of volunteers.

During the monitoring, the topic of corruption and combating it was mostly ignored — in printed media outlets and on TV. Only online media outlets address this topic, but even there it has few fans — it was the topic in only 2% from the total number of news in online media outlets. Television journalists express little to no interest towards international events, news from Russia, and sports — no news on these topics during the monitoring. The explanation here may be appropriate focus of regional channels on local news, but it still does not work for absence of sports news. For instance, Mariupol Television (MTV) replaced sports news with the review of the cultural events of the city; some assume that this shift was commissioned by the city authorities, as MTV won a tender on production of media product that covers Mariupol’s cultural life. The topic of sports is popular with periodicals — with the share of 11%, on par with the 10% share for the topics of economy and state politics each.

An important topic of the conflict-affected populations — IDPs, ATO veterans, and military families — is not addressed actively. In printed and online media outlets, this topic gets 4% of materials, and on TV its share was 5%.

The dzhynsa indicators in general are nothing to brag about, but not that terrible, either. It is possible, that with time the situation will change as the local media outlets in Mariupol have won several tenders from the city authorities for coverage of their activities at the cost of local budget.

During the monitoring period, the major patron of covert advertisement in Mariupol are the corporation «Metinvest»’s enterprises. These are «Zelenyi Tsentr Metinvest» (environment and city improvement), «Zelenyi Rostok» (environmental education for children and teenagers), «Rinat Akhmetov’s Humanitarian Headquarters» (assistance to socially unprotected populations).

One might object that all these organizations are engaged in socially important issues, but materials about them are somehow never tagged «Advertisement», and this advertisement does not look all that covert. It is difficult to classify Metinvest-commissioned dzhynsa either as political or as commercial, as both components are present here, neatly camouflaging as the social direction of Akhmetov’s structures.

How skillful they are at the «Metinvest» corporation in camouflaging is clearly demonstrated by the instance of de-Communization of one of the metallurgic giants that the corporation owns. This metallurgic combine was named after Illich, that is, to honor Volodymyr Illich Ulianov (Lenin), and it was renamed into the combine named after… Illich, but this time it was Zot Illich Nekrasov, whose  connection to the combine is as distant as Lenin’s. There were 8 materials of Metinvest-commissioned dzhynsa.

Another dzhynsa patron is Serhiy Matviyenkov, a MP from «Opposition Bloc» and a former Party of Regions member. He was a beneficiary of 4 materials.

Another politician engaged in commissioning dzhynsa was Andriy Fedai, the councilmember from «Opposition Bloc», who has currently joined the political association «For Peace And Stability», which is believed to be the project of a young oligarch Serhiy Kurchenko (former member of the Party of Regions). He was a beneficiary of two political dzhynsa materials.

In Kramatorsk media, the major patrons of dzhynsa also include local large enterprises: the Public JSC «EnergoMashSpetsStal» and the Public JSC «Starokramatorsky Machine-Building Plant», as well as Maksym Efimov (MP from PPB). Each of those had 2 dzhynsa materials. In Kramatorsk, at least  three printed social and political media outlets belong to the former Party of Regions member and now an MP from PPB Maksym Efimov, and, correspondingly, publish unabashed dzhynsa to his benefit.

The biggest deliverers of dzhynsa in Mariupol are the newspapers «Ilyichevets», «Priazovskiy Rabochiy» and the TV channel «MTV» (Mariupol Television); on the oblast DoTV, no dzhynsa was spotted. In newspapers, 5% of all news is dzhynsa, on TV, this share constitutes 2% and on news websites — 1%.

Sources of information for local media in Donetska oblast

Online media outlets get 46% from official sources (most often, it is the Ministry of Internal Affairs), next come their own correspondents (22%). Only 4% come from eyewitnesses and 2% — from anonymous sources.

TV gets almost all its information from their own correspondents — 75%. Another 19% of its news comes from official sources (these are police and local authorities), 5% of information comes from experts, and 1% — from eyewitnesses.