Media crackdown ahead of EU-Ukraine summit 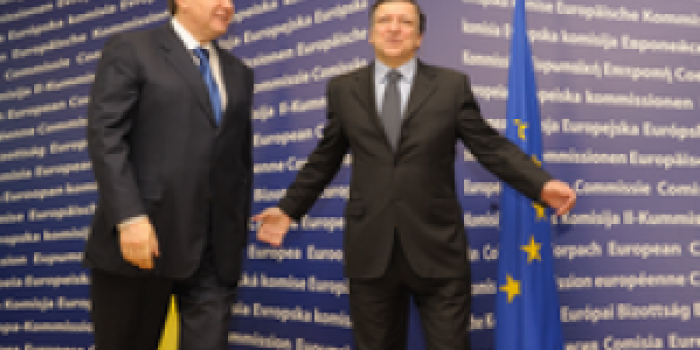 Alleged sabotage of a major news agency, the axing of a top TV show - days ahead of an EU-Ukraine summit, EU diplomats fear a new media crackdown in Kiev, EurObserver reported.

Staff at the online Unian agency held a crisis meeting on Tuesday (20 February) over fears that its billionaire owner, Ihor Kolomoyskyi, plans to shut it down or to censor its output in order to curry favour with President Viktor Yanukovych.

The problems began last May when it sacked its respected editor-in-chief.

They escalated in November when editors published emails from management telling them to stop Yanukovych-critical news during October's parliamentary elections.

They got worse in February when Unian published a story - quickly exposed as fake - saying an opposition MP thinks that Ukrainian security services are trying to poison him.

The scandals have prompted subscribers to flee Unian in droves, politicians refusing to give quotes, tenants abandoning its building in Kiev and journalists losing or quitting their jobs.

Oleksandr Tkachenko, the chief of Kolomoyskyi's media holding firm, told EUobserver on Wednesday that he cannot comment on events because he has imposed a "silent period" until the crisis is over.

But his staff and former staff are keen to speak out.

Thirty five Unian journalists have signed an open letter accusing their bosses of orchestrating "a disastrous strike on the agency's reputation."

Elena Litvinova, a Unian reporter who recently lost her job, told this website it was likely due to her "struggling for journalists' rights."

She added: "I cannot exclude that the situation in the agency is a consequence of pressure from the authorities on the agency's owner."

The situation has attracted the attention of the Paris-based International Federation of Journalists (IFJ).

"We are worried that a press agency which used to be trusted by professionals and by the public is becoming instrumentalised by politicians," IFJ chief Jim Boumelha said this week.

It has also come to the attention of EU diplomats in Kiev.

One EU contact, who asked to remain anonymous, told EUobserver that Kolomoyskyi is trying to sabotage Unian in order to save face while protecting his other business assets from attack by the regime.

"If he closed it down, there would be a public outcry. But if he forces the market to squeeze it out, he won't be blamed. It won't look like his personal decision," the EU source said.

With most Ukrainian media openly allied with the regime or the opposition, the loss of Unian, a relatively neutral source, would be a blow to press freedom as Yanukovych prepares to retain power in presidential elections due in late 2014 or early 2015.

Meanwhile, developments in the country's most popular TV station, Inter, have prompted concerns of a wider crackdown.

On Wednesday, Inter axed its political talk show, Spravedlyvist - a prime time platform for Yanukovych critics - and replaced it with a show chaired by a known Yanukovych supporter.

EU diplomats also see the changes as power games in the run-up to the presidential vote.

Khoroshkovsky and Firtash are allies in Ukraine's "gas lobby" - a clique of energy-sector tycoons and politicians who used to hold top government posts.

But Yanukovych last year shoved them aside in favour of the "familia" - a clique linked to the President's relatives, some of whom, like his son, Oleksandr, are becoming multi-millionaires on his watch.

The EU diplomatic source noted that Khoroshkovsky - Ukraine's former spy chief and a potential candidate in the 2014 election - has fled to Monaco and is "afraid" to go home in case he is arrested on bogus charges.

Another EU diplomat said Khoroshkovsky transferred Inter to Firtash to stop the familia from grabbing it because Firtash is a "bigger fish" better able to protect the asset.

He added that Firtash let Lyovochkin axe Spravedlyvist to win back favour with the regime.

The wave of intrigue comes ahead of an EU-Ukraine summit next week and amid Kiev's push to get the EU to sign an association agreement and free trade pact in November.

With EU-Ukraine ties already in the pits due to Yanukovych's jailing of opposition politicians, it could harm relations still further.

But the question for Brussels is a strategic one - should it sign a treaty with a controversial regime, or risk Ukraine slipping back into Russia's sphere of influence because of "EU values"?

Attempts to reorientate state-owned TV channels Dom and Rada are a backtracking on democratic reforms - Media Movement’s statement
News
Prosecutor General's Office registers 74 violations of "journalist" articles since the beginning of the year
Tkachenko about formerly pro-Russian TV hosts: they are showing patriotic work during the war
Tired of working at this pace – Maryan Kushnir about his last conversation with Maks Levin
Poltava City Council does not respond to journalist's request on time, does not provide information she requested
Do you want to be first to learn about the new research of the Institute of Mass Information? Subscribe to the newsletter!