Last week was a hot one for journalists: the «amber rush» continues, and its coverage boomerangs to mass media staff. Members and chairs of electoral committees get brazen as they confront journalists – the committees started preparing for the October 25 elections: they try to get the journalists out of the room. In Khersonska oblast, an online and phone confrontation  continues as the former Party of Regions member Oleksiy Zhuravko (former local «baron» from Tsuriupinsk) from the territory of Russia threatens to «deal» with the local blogger of the media outlet «Oleshshya Online», when Party of Region members «return to power».

Residents of "amber" region of Volynska oblast (village of Lisne, Manevytskyi rayon) were obstructing journalists. About half a hundred men blocked the governor's car and the bus carrying journalists. According to the words of VolynPost media outlet journalist, the people threatened them and tried to not allow them to record the events. The people also yelled to the head of Volyn Oblast State Administration Volodymyr Hunchyk, “Shame on you! Where have you been before, whom were you covering?”.

In the town of Terebovlia, Ternopilska oblast, the head of a rayon electoral committee Veneria Reshetynska tried to expel from the committee session the journalist of the media outlet “Tochka Opory” Tetiana Denys.

In Ternopil, the journalist of the newspaper «Tochka opory» Volodymyr Dovhaniuk was not allowed to stay in the room of the electoral committee on the order of the head of Ternopil electoral committee Viktor Drozd. The OPORA website informed about this case.

In Mariupol, Donetska oblast, men wearing camouflage uniforms, who introduced themselves as security guards for the head of Donetsk Oblast State Administration Pavlo Zhebrivskyi, did not admit "Hromadske Donechchyny" journalists to the OSA head's press conference.

A blogger from Tsuriupinsk (Khersonska oblast) and editor of “Oleshshya Online” Dmytro Voronov stated that on September 18 he again received phone threats from the former Parliament member from the Party of Regions Oleksiy Zhuravko. Voronov wrote about this on the website “Oleshshya Online”. “Today, I received another phone call from Oleksiy Valeriyovych Zhuravko with overt threats. This time, he used a "Kyivstar" phone number", Voronov wrote.

In Volyn, the oblast administration of the Ministry of Internal Affairs responded to an information request by the journalist of the online media outlet “VolynPost” Oksana Dolzhko on salaries of road police senior officers with a delay, and did not provide any actual information, just stated that this was personal data and as such cannot be disclosed without consent of the officials in question, and that consent was not granted for this.

The head of Ternopil city electoral committee Viktor Drozd refused to provide to the journalist of “Tochka Opory” Ihor Protsyk information on the time and place of the upcoming party conferences. 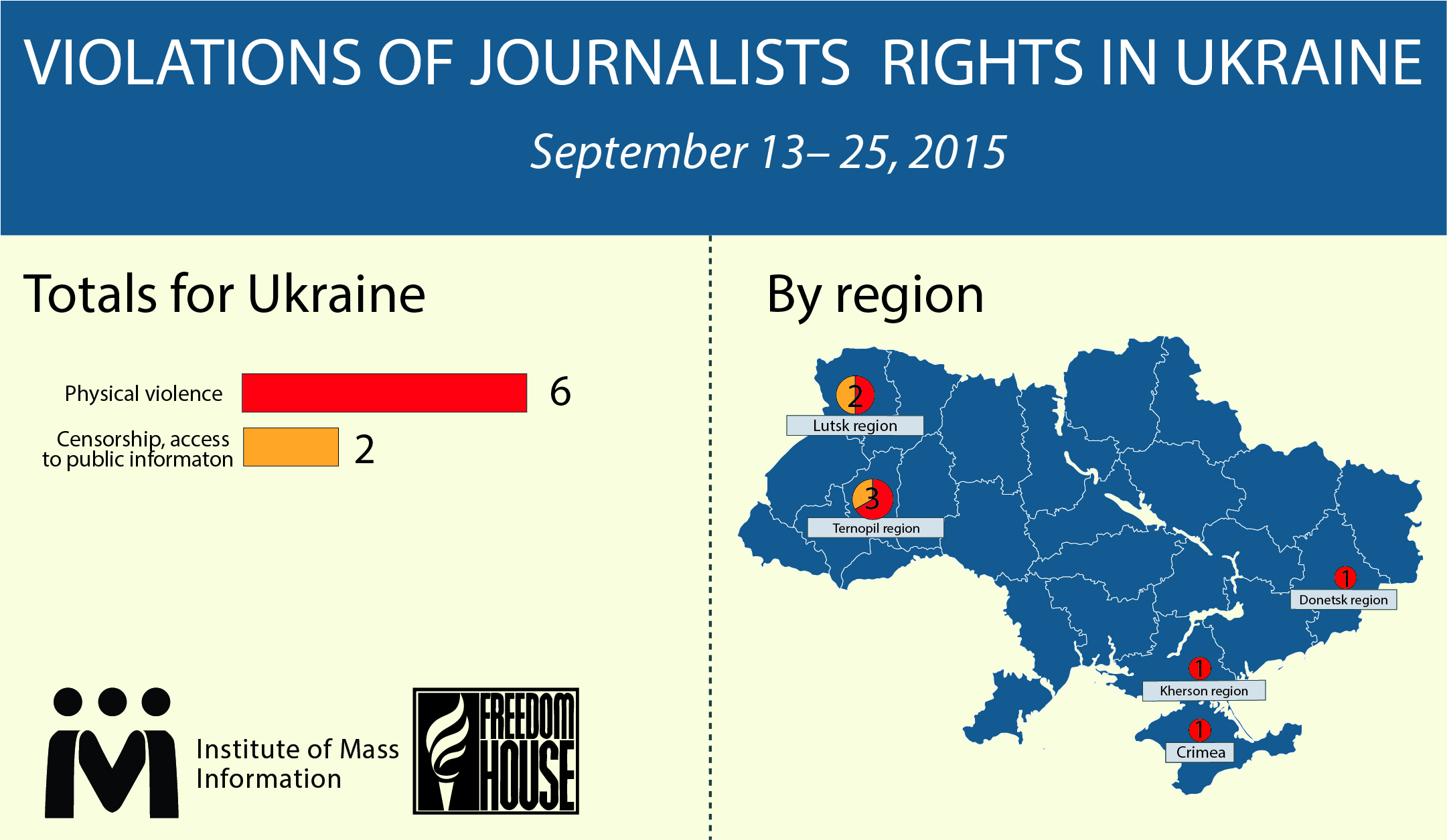 For additional information, please visit the website www.imi.org.ua and www.freedomhouse.org/ukraine-media-watch.

This report was prepared under the project «Network of media observers», implemented by IMI with support from Freedom House and the Ministry of Foreign Affairs of Norway.

Attempts to reorientate state-owned TV channels Dom and Rada are a backtracking on democratic reforms - Media Movement’s statement
News
Record number of online resources blocked in Russia in 2022 – survey
Woman in Russia fined for "Glory to Ukraine" written in her WhatsApp profile in Korean
Ministry of Culture and the NACP start the search for works of art stolen by the occupiers during the war
Illegal operator Lugacom disables mobile Internet in the occupied Luhansk oblast
Do you want to be first to learn about the new research of the Institute of Mass Information? Subscribe to the newsletter!