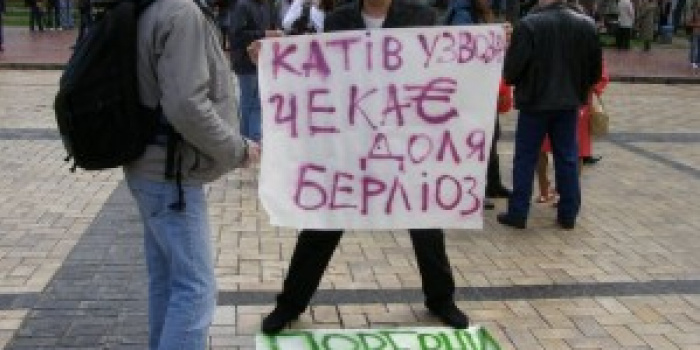 Reporters Without Borders recently released Press Freedom Index for 2013. Ukraine plummeted 10 places. It occupies the 126th place among nations in the world, neighboring with Algeria and Honduras, according to an article by Orysia Lutsevych for Kyiv Post.

This deterioration of the democratic record is not new for Ukraine. Since 2010, most democratic indexes demonstrated a steady decline. This one is particularly disturbing because media freedom was one of the most-often praised accomplishment of the 2004 Orange Revolution.

How far will this trend continue and is civil society capable to protect democracy? How to finish the revolution and achieve those aspirations for freedom and justice voiced on Maidan in 2004?

Findings from my Chatham House report shed some light on these questions and flash some red signals for the leaders of non-governmental organizations and Western donors supporting them.

Civil society in Ukraine, and in the post-Soviet region as a whole, is weak as citizens remain disengaged from public life and hold back from participating in independent organizations, informal groups and professional organizations. Despite 71,000 registered NGOs in Ukraine, only 5 percent of Ukrainians report any kind of membership.

They feel more comfortable discussing politics at home in front of a political TV talk show than expressing their thoughts in the town hall meetings or public debates. Citizens rely on informal clientele-type networks and corruption to find their ways around the system.

At the same time, many well-established Ukrainian NGOs form an “NGO-cracy,” where professional NGO leaders use access to domestic policymakers and Western donors to influence public policies, yet they are disconnected from the public at large. Annually major foreign donors spend roughly $42 million for civil society assistance in Ukraine.

This includes US Agency for International Development, the International Renaissance Foundation (owned by U.S. billionaire George Soros) and the European Union. Western money allows NGOs to attract talent, but their full-time employees are more comfortable networking with Western embassies and various state agencies than holding public consultations and engaging with citizens.

This assistance is roughly going to the 200 best-connected groups in Ukraine, among them think tanks, advocacy groups, watchdog groups. They are mostly interested in influencing policy and advocacy and very few of them would describe themselves as an “association of citizens.” Only 17 percent of Ukrainian NGOs have more than 100 members.

As the result, Western assistance focused on consolidating democracy is failing. NGO leaders themselves acknowledge their marginal influence on policymaking in Ukraine but mostly believe it is due to unwillingness of the government to include NGOs in genuine public consultation. There is truth in this. Most of the public councils that operate at the national and local levels are either rubber-stamping decisions or are being hijacked by the ministries, as arecent case with the Public Council at the Interior Ministry vividly demonstrates.

The Public Council, a public body that is supposed to oversee the observance of human rights by the police, was dismissed in August last year, and the ministry on Jan. 27 handpicked members of the new council through a number of manipulative tactics. More than 50 representatives of specialized NGOs were left out of the process.

Political reality in Ukraine shows that expertise alone is not enough to influence policymaking. To be influential organisations have to be representative and enjoy public support. Recent events proved that civil society movements such as Tax Maidan II, network to Protect Andriyvsky Uzviz, student movement against the new educational law turned successful due to citizens mobilization in public space, media campaigns, active social network strategy, clear focus on issues of specific constituency.

Both donors and NGO leaders should embrace the fact that the fundamental problem with Western assistance to civil society is that it leaves much of society untouched and this undermines the transformative power of the whole exercise. When citizens are not at the heart of these organizations, they become passive consumers of democracy development aid instead of the driving force behind democratic change.

Western donors should spend their money more wisely. They should embrace the idea that active and empowered citizens, not the expertise of a few NGOs, are the indicator of civil society’s strength. Prioritizing greater citizen participation in organizations, as well as social trust, tolerance, openness and self-expression can do this.

Donors could also consider supporting not just English-speaking, Western-oriented NGOs and shift their attention to the grassroots level. Non-conventional actors such as youth groups, students’ associations and universities, grassroots citizens’ initiative groups, intellectual circles, schools and religious organizations that pursue charitable and community goals . Donors need to consider incorporating conditionality in their support for NGOs, based on criteria that include connections with citizens.

Ukrainian activists and NGO leaders must design a strategy and engage citizens more in what they do. If Ukrainians want true democracy, transparency and personal freedom, they need to build social trust.

Government will not give up space to citizens out of good will. It is up to citizens to demand and occupy this space. To prevent further deterioration of democratic freedoms, Ukrainians should engage in public life beyond voting in elections, because as Karl Popper pointed out: ‘Democracy may help to preserve freedom but it can never create it if the individual citizen does not care for it.’

Orysia Lutsevych is a Ukrainian civil society expert living in London. She was Robert Bosch Fellow at Chatham House in 2012, and formerly headed Arseniy Yatseniuk's Open Ukraine, a private foundation.

Attempts to reorientate state-owned TV channels Dom and Rada are a backtracking on democratic reforms - Media Movement’s statement
News
Prosecutor General's Office registers 74 violations of "journalist" articles since the beginning of the year
Tkachenko about formerly pro-Russian TV hosts: they are showing patriotic work during the war
Tired of working at this pace – Maryan Kushnir about his last conversation with Maks Levin
Poltava City Council does not respond to journalist's request on time, does not provide information she requested
Do you want to be first to learn about the new research of the Institute of Mass Information? Subscribe to the newsletter!