Analysis of media-situation in southern and eastern oblasts of Ukraine: Zaporizhzhya oblast 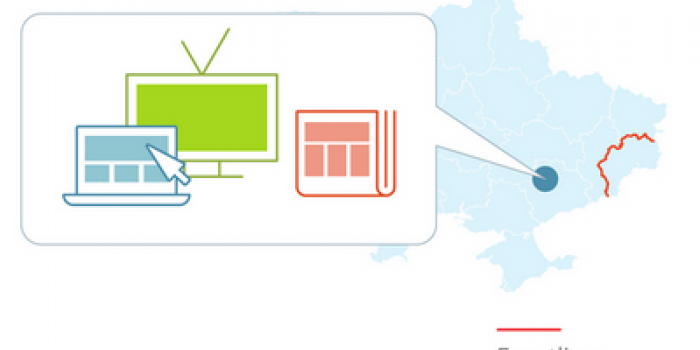 Analysis by Institute of Mass Information

For this population, according to Wikipedia, 602 printed media outlets are registered, of them 185 are published regularly.

Twenty-five of them are communal media outlets of oblast and rayon councils, with the total number of copies 114,393. Thirty-eight general political media outlets belong to economic operators, NGOs and other organizations, with the total number of copies 490,244. Over thirty newspapers and magazines are advertisement materials. About one dozen belong to political forces and come out in an irregular manner. The number of printed editions of educational institutions is also about one dozen.

The majority of media outlets in Zaporizhzhya use Russian – about 90%. Only Zaporizka oblast TV and Radio Company and communal newspapers «Zaporizka pravda» and «Zaporizka Sich» use Ukrainian; sometimes, texts in Ukrainian are published at the website «Porogi». And this is in spite of the fact that, according to the latest survey in Zaporizka oblast, 42% of population are Ukrainian speakers.

MEDIA OWNERSHIP STRUCTURE IN THE REGION

As to the structure of ownership, Zaporizhzhia mass media have one peculiarity: while in other regions, the influence spheres are mostly based on political affiliation, for example, as it is in Odesa or Dnipropetrovsk, in Zaporizhzhia the influence spheres are divided between industrial giants, such as «Zaporizhstal'», «Motor Sich» or the liqueur and spirits factory «Khortytsia». Of course, industrial giants in Ukraine also belong to people with certain political ambitions and interests.

For example, the newspaper «Industrialnoye Zaporozhye» and TV channel TV-5 belong to the metal works «Zaporizhstal», which is owned by the former Party of Regions MP Rinat Akhmetov, who now supports the «Opposition Bloc». This influences the content of these media outlets. During the last elections campaign, they actively supported mayor candidate Volodymyr Buriak, who worked as an director of engineering of the MW «Zaporizhstal», and, as a result, Buriak won the elections and became the mayor of Zaporizhzhia.

One of the most popular newspapers of Zaporizhzhia «Subota Plius» is not in the circle of influence of industrial giants, and presents itself as an independent media outlet. The newspaper’s editor-in-chief Bohdan Vasylenko was running for mayor at local elections. Still, because this media outlet published so many commissioned stories, this did not really make its content too skewed.

One more industrial giant, PJSC «Motor Sich» owns the newspaper «Pozytsiya» and the TV channel «Alex». The president of «Motor Sich» is Member of Parliament Vyacheslav Bohuslayev, who is now a member of the faction «Volya Narodu», and was elected in the single-seat electoral district. Yet, IMI monitoring found no bias in the TV channel «Alex»’ materials towards any certain political interests, at least not in this particular elections campaign.

The newspaper «Mriya» and the online media outlet «Holos Zaporizhzhia» are allegedly affiliated with the liqueur and spirits factory «Khortytsia» owned by Yevheniy Cherniak, who now lives abroad and does not have any clear political affiliation in Ukraine.

There are independent media outlets, for example, the website 061.ua; yet, these media, due to the need to make money, publish quite a lot of commissioned materials, thereby violating ethical standards of journalism. 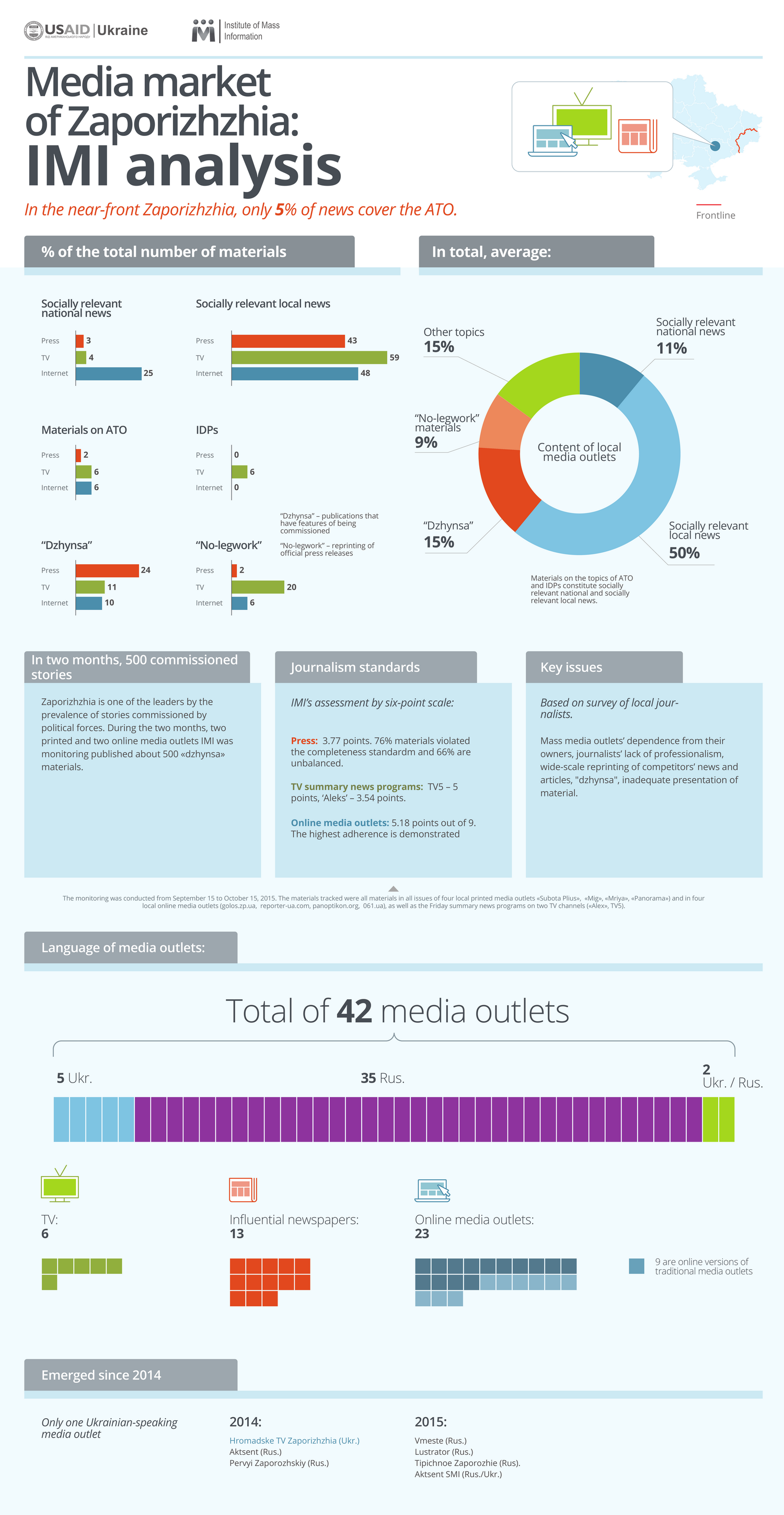 At that, this indicator shows great consistency across the three media types: the percentage of socially relevant local news on television is 59% from the total, for online media outlets this indicator is 48%, and for printed press – 43%.

One negative feature of Ukrainian mass media outlets is publication of commissioned stories; the number of such publications skyrockets before the elections, because for media outlets, it is an easy way to make money, and for politicians – a tool to manipulate the public opinion.

According to data of IMI’s pre-election monitoring of regional campaign, Zaporizhzhia is one of the leaders by the prevalence of commissioned stories in mass media. During the two months of the pre-election campaign, in two printed and in two online media outlets, about 500 «dzhynsa» materials were published – and those are only political commissioned stories. Accordingly, the share of such materials in Zaporizhzhia, according to UCBI project monitoring, also was quite high; in total, in the three types of mass media, the percentage of such materials was 15% from all materials published in the period. The greatest share of such materials was in press, 24% from the total materials published, the smallest share, 10%, was in online media outlets, and 11% on TV. Still, of course, we understand this is not just «dzhynsa» in pure understanding of the word (materials that someone unofficially paid money to get published). Some materials that have features of being commissioned were published as a part of the media owners’ editorial policy. As an example, the newspaper «Industrialnoye Zaporozhye» owned by «Zaporizhstal» provided informational support to the candidate from this enterprise, Volodymyr Buriak.

The largest share of «no-legwork» materials, 20%, was published on TV, even considering that we did not monitor the Oblast State TV and Radio Company broadcasts. A quite low indicator of «no-legwork» was in printed press – only 2%; in online media outlets, the indicator of such materials was 6% from the total.

Zaporizka oblast borders with the ATO zone, and is in close vicinity to such hot sites as Volnovakha and Mariupol. Yet, the percentage of materials related to the topic of the conflict in the East is low in the local mass media – 5% from total number of materials. The percentage of such materials is especially low in printed press – only 2% from the total number of published materials. On TV and in online media, there are 6% of such materials published in each media type.

The situation is similar for the topic of internally displaced persons: this topic in local mass media is raised only in 2% of news. At that, in printed and online media outlets there were no such materials at all. Only television focused attention on this problem, with the percentage of 4-5% from total materials published; yet, considering the monitoring methodology, namely the fact that only Friday summary news programs were monitored, the real prevalence of such materials must be actually much lower.

Except the factor regarding which information mass media publishes for the local residents to read, listen, and see, another important factor is of what quality this information is.

In this aspect, the online media of Zaporizhzhia did show a very high level of adherence to journalist standards: out of possible 6 points they received 5.18. The best in this regard were the websites reporter-ua.com and panoptikon.org – 5.27 points each.

Instead, in printed press a quite low level of adherence to professional standards was discovered – only 3.77 points of 6 possible. At that, practically all newspapers that we inspected showed such low results. In the qualitative analysis, the newspaper «Subota plius» deserves a separate mention for quite high-quality analytics and investigations, and, accordingly, it was rated at 4.25 points. Yet, the number of such high-quality materials was in reality very low – one or two of them per newspaper issue, and the percentage of commissioned stories was as high as 23% from the total number of materials.

A striking fact is that, based on our survey, in 76% of articles in printed editions the standard of completeness was violated, and 66% of materials were unbalanced. The least violated standard in the printed press was the standard of separation of facts from comments – only in 8% of cases.

TV showed contradictory results, as one of the analyzed channels showed quite high results – 5 points out of 6 (channel TV5), and the other (TV channel «Alex») showed low results – 3.54 points. Accordingly, it would be incorrect to derive a general picture for the whole city television journalism standards from those results.

ASSESSMENT OF SITUATION BY LOCAL JOURNALISTS

The preliminary survey of Zaporizhzhia media activists and journalists (the survey engaged 23 local journalists and activists) indicated that the respondents trust the content of local mass media only to a degree. The most trusted websites are PravDA, 061.uа, and Hromadske Zaporizhzhia. Among the main problems of the regional mass media, according to the respondents, are dependence of mass media outlets from their owners, lack of professionalism of journalists, wide-scale reprinting of news and articles of competitors, promoted stories (so-called «dzhynsa»), inadequate presentation of material.

All surveyed journalists agree that the local mass media are over-saturated with information, but this information is not good-quality news or analytics. Very often, the events of the national scale remain outside of the scope of the regional mass media. The readers do not receive information on how adoption of this or that law would affect the region of Zaporizhzhia.

The main mass media outlets that publish regional news, as mentioned by the respondents, are the following: 061.ua – 60% of journalists, Hromadske Zaporizhzhia – 15%, z-city and zabor – 10%, each, Reporter – 5%, Mig and Pravda are mentioned separately. Most trusted media are Hromadske Zaporizhzhia and the website 061.ua – in particular, because the respondents know the journalists that work there and due to generally good reputation of these media outlets. All respondents mentioned that they feel the influence of owners on local mass media.

As to the sources of information, journalists receive from colleagues 55% of information, 30% – from social networks Vkontakte and Facebook, 15% – from personal sources, and 10% – from other websites or other sources of information. Journalists complain that at least 50% from their regional news is reports about crimes, 25% – social and political topics, 20% – business, and 5% – other news. Practically all journalists mentioned that they cannot select topics to report about, as they «work for mass media owners, not for the audience». Often, the editors select topics for the journalists.

Among the problems that the local mass media face, the journalists who were surveyed mentioned owners’ pressure and the censorship of authorities; for example, the authorities often completely ignore some of the local mass media. One more problem is that the media outlets cover only the issues of the oblast center, not of the entire region around it. 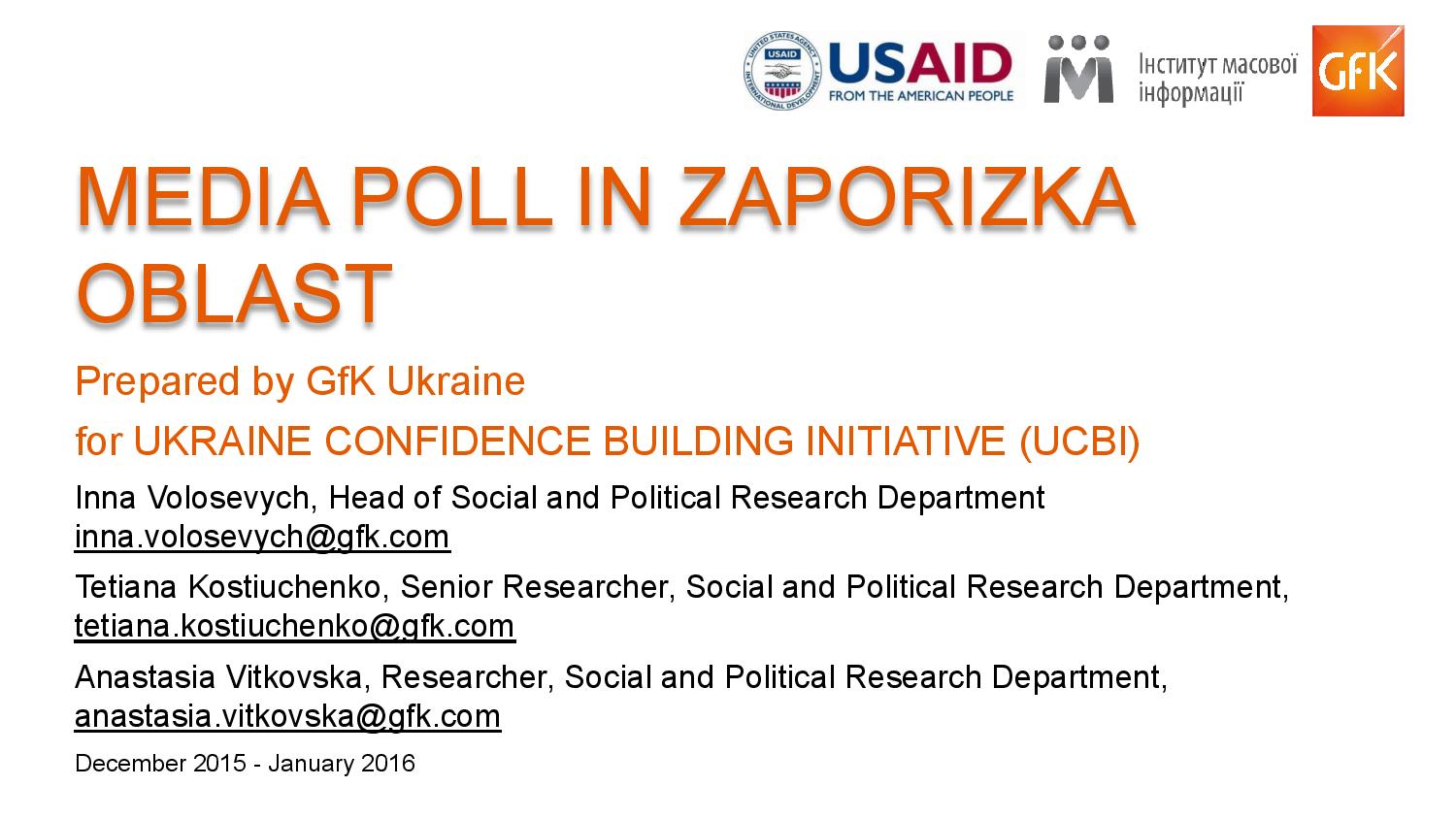 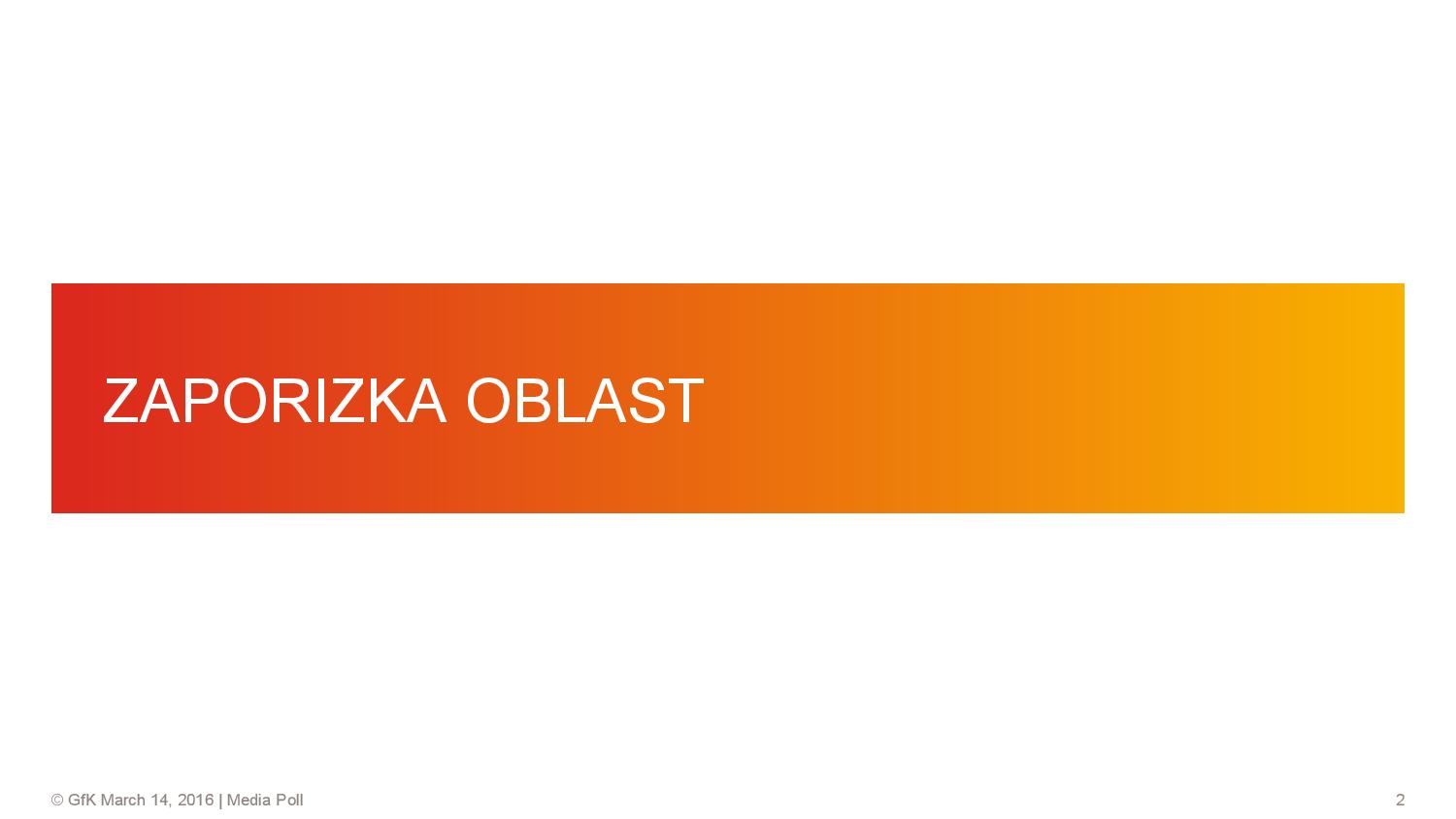 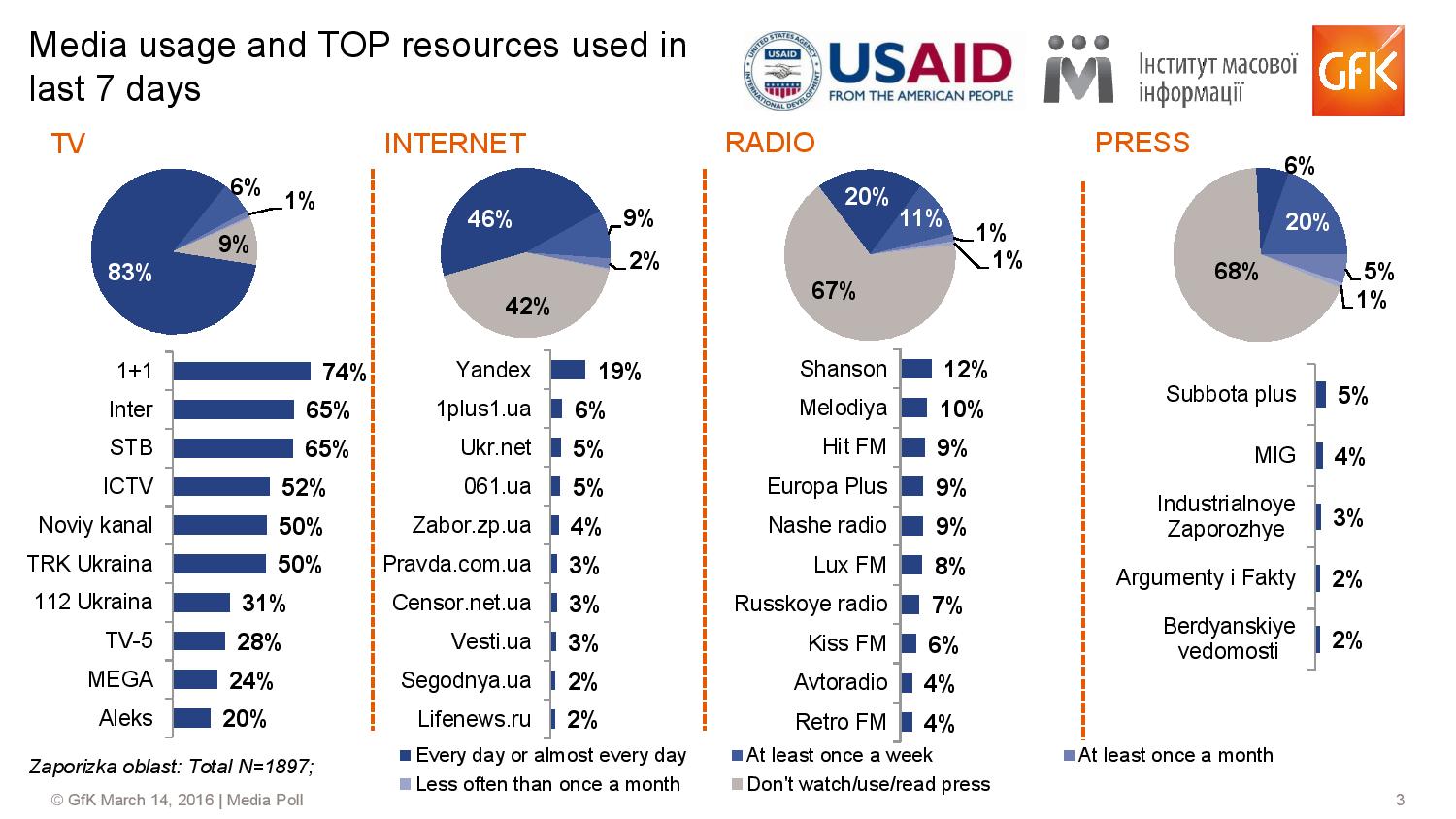 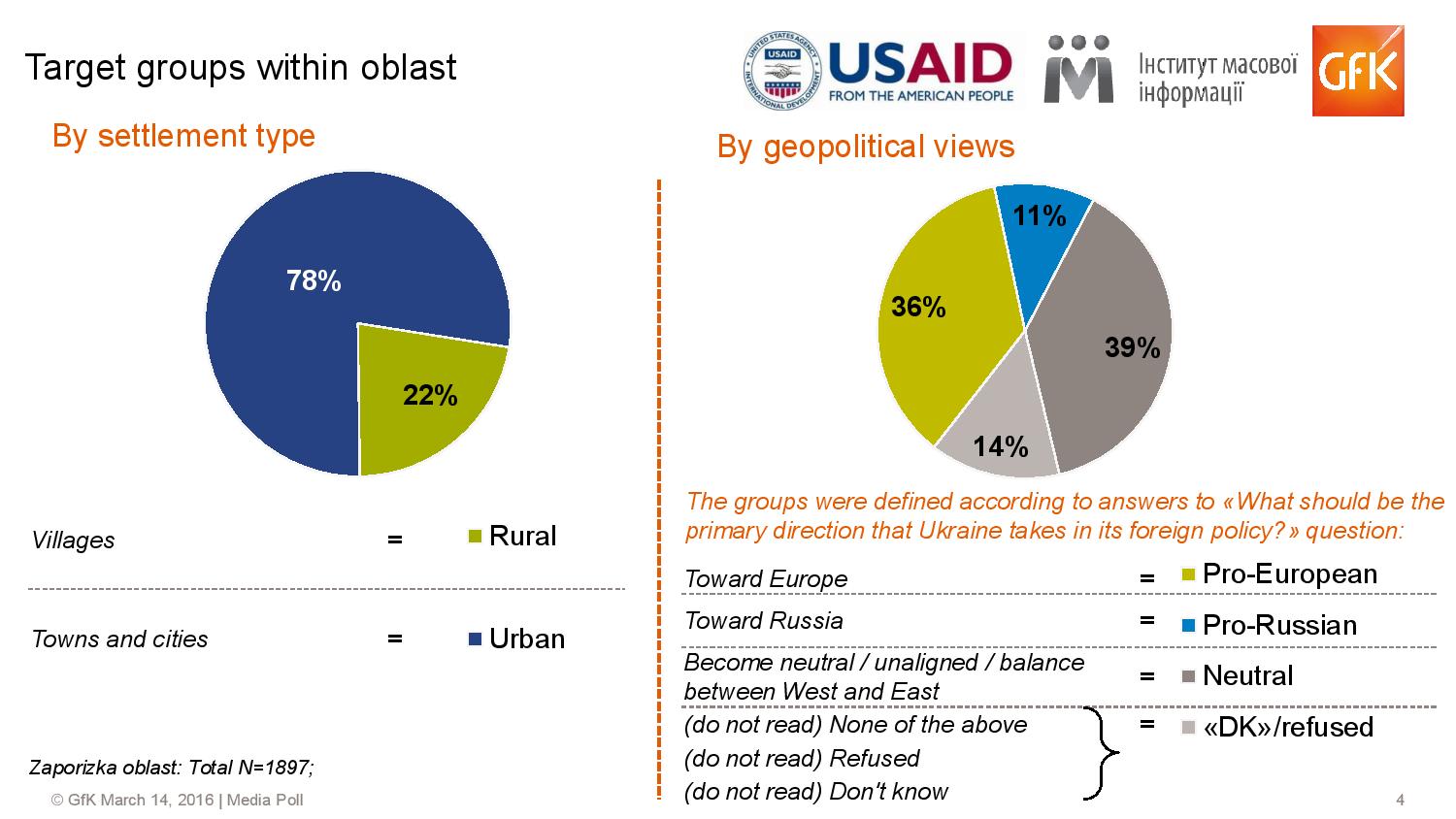 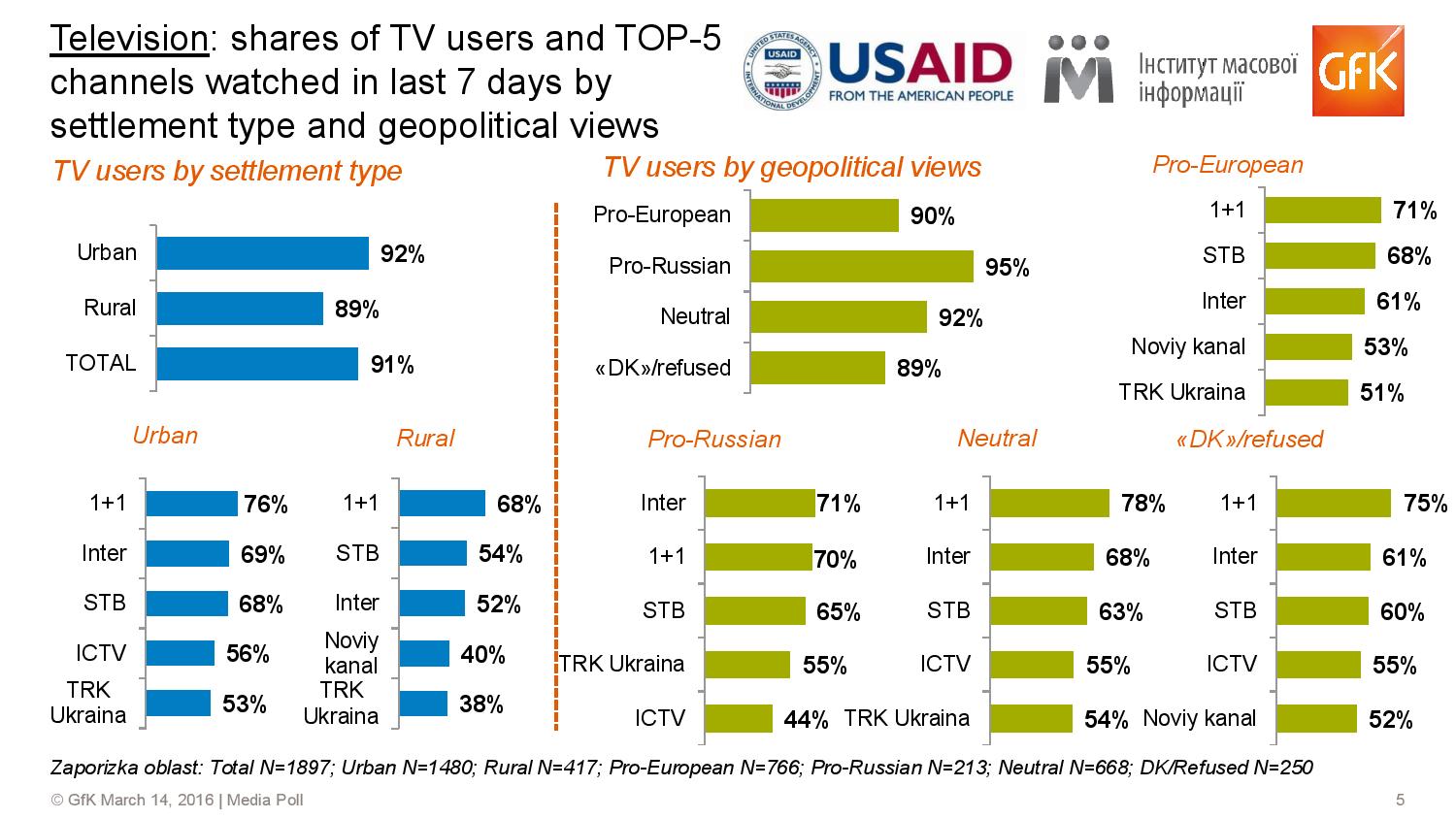 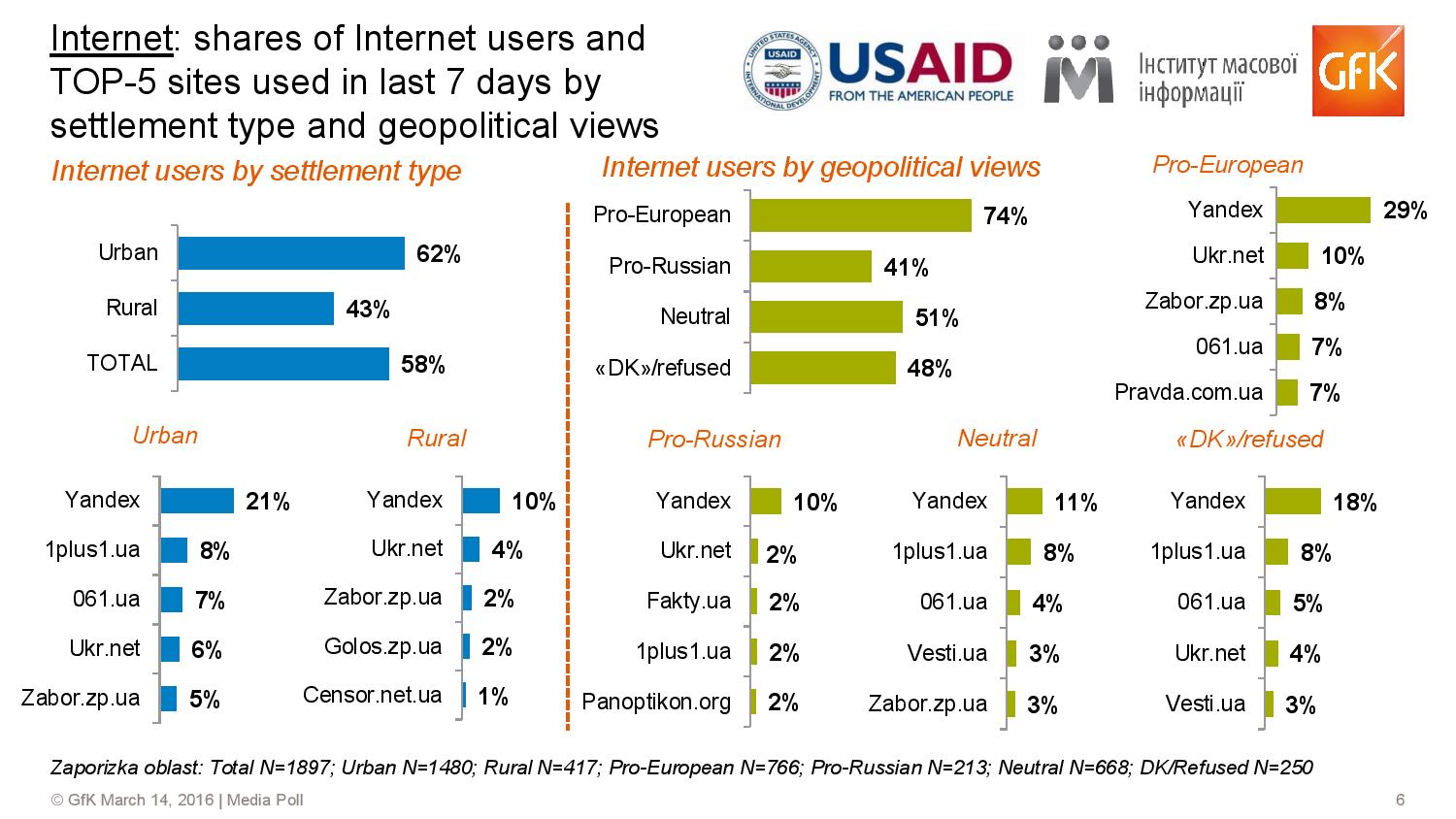 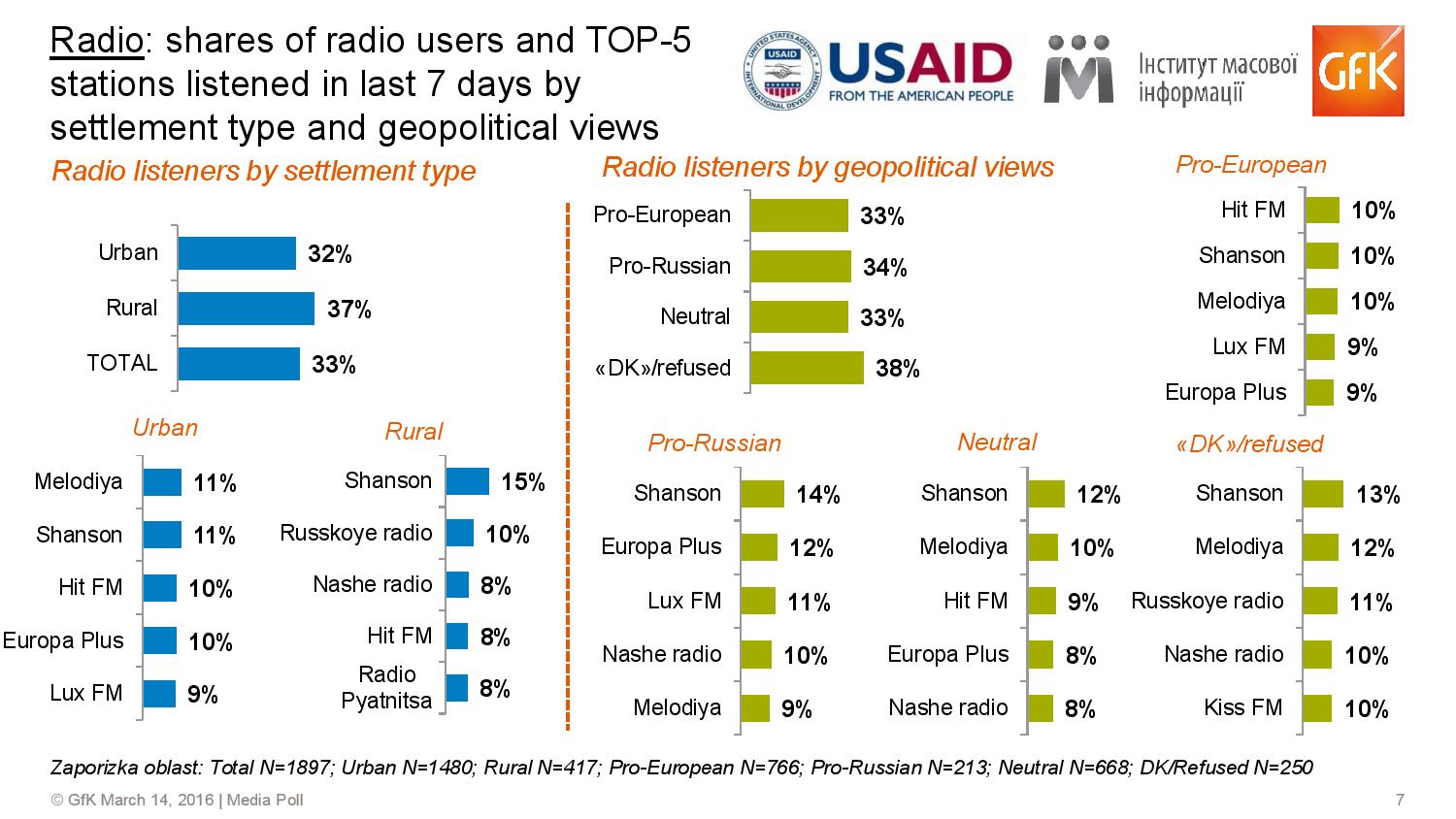 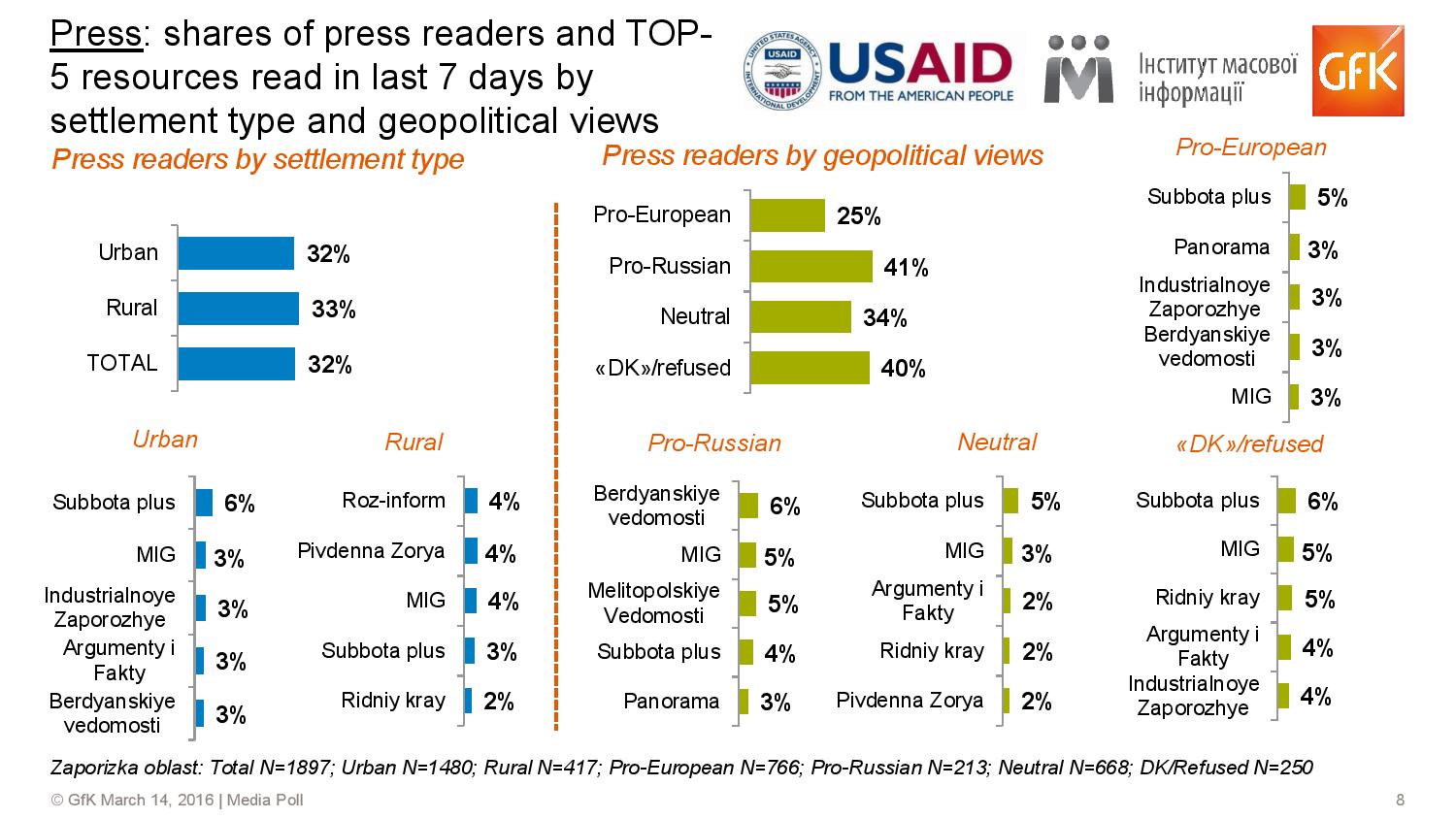 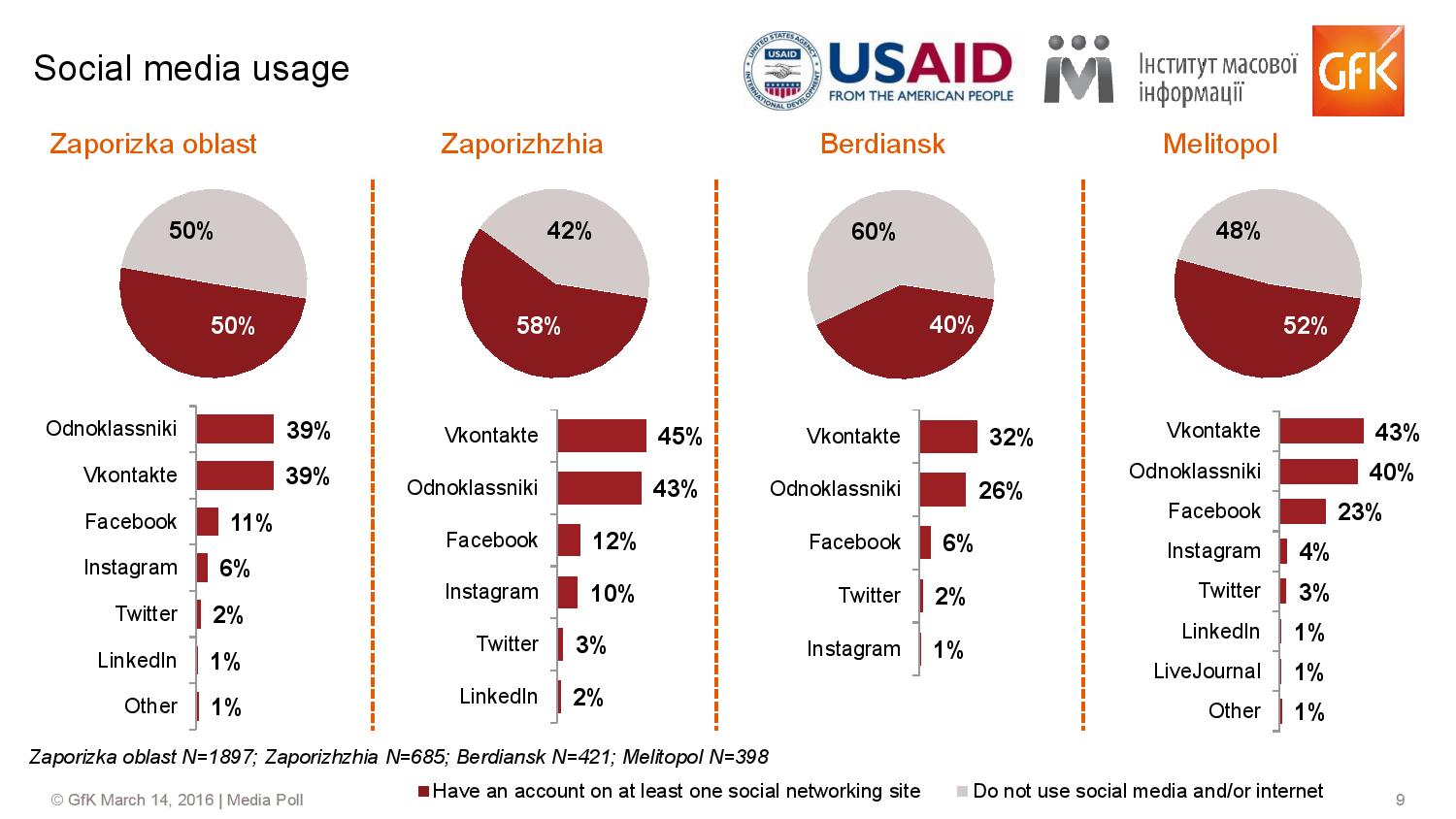 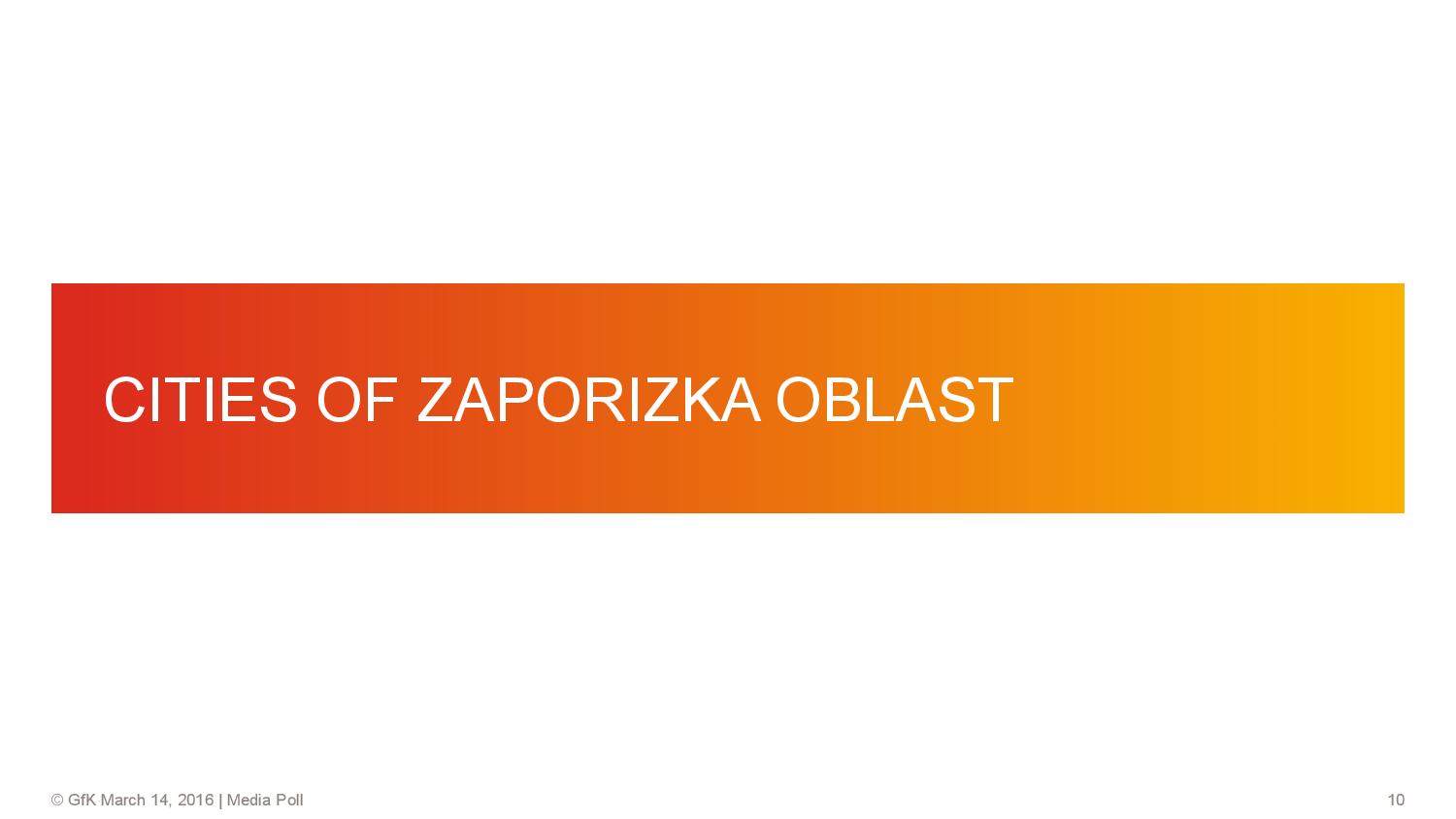 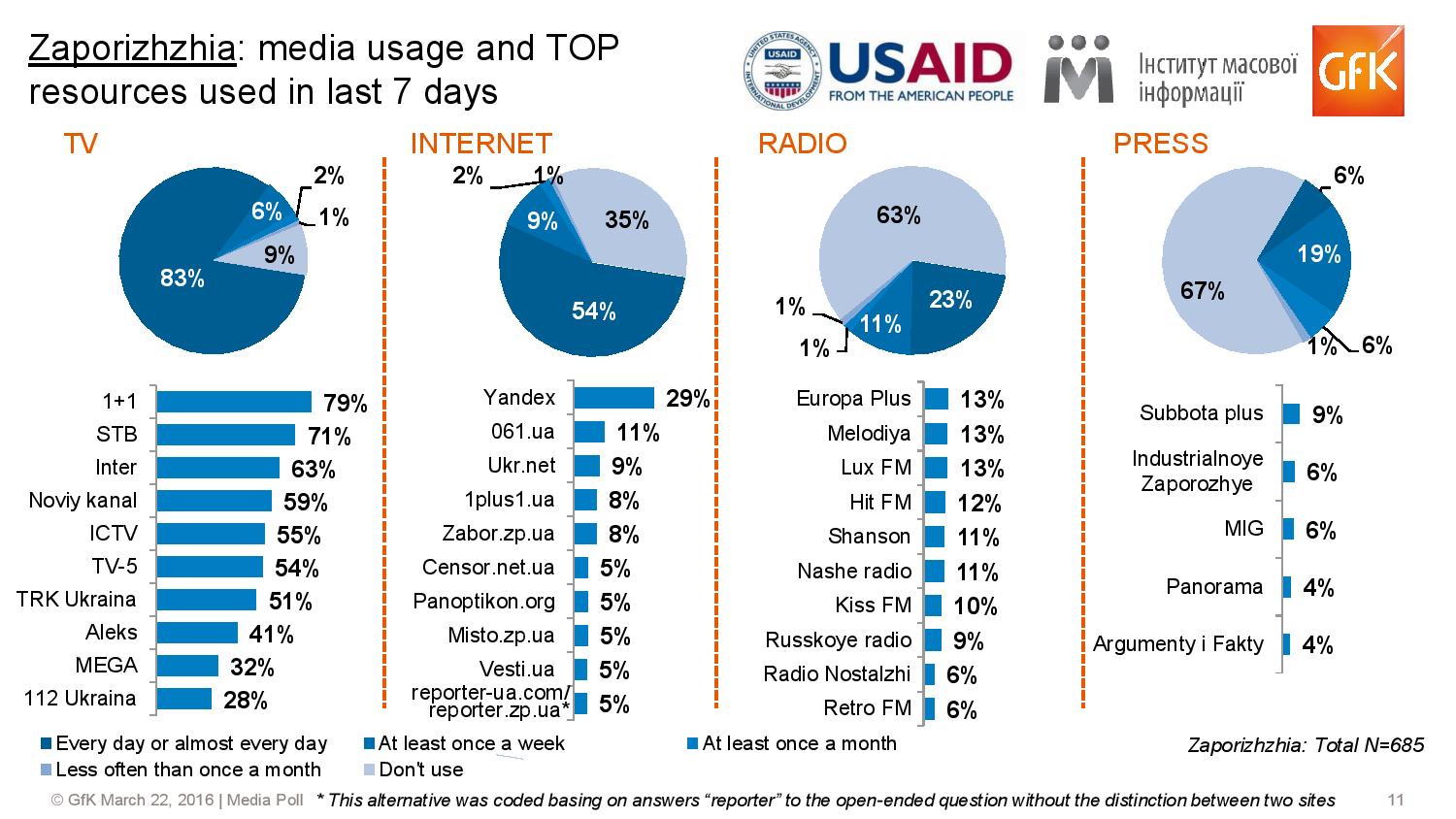 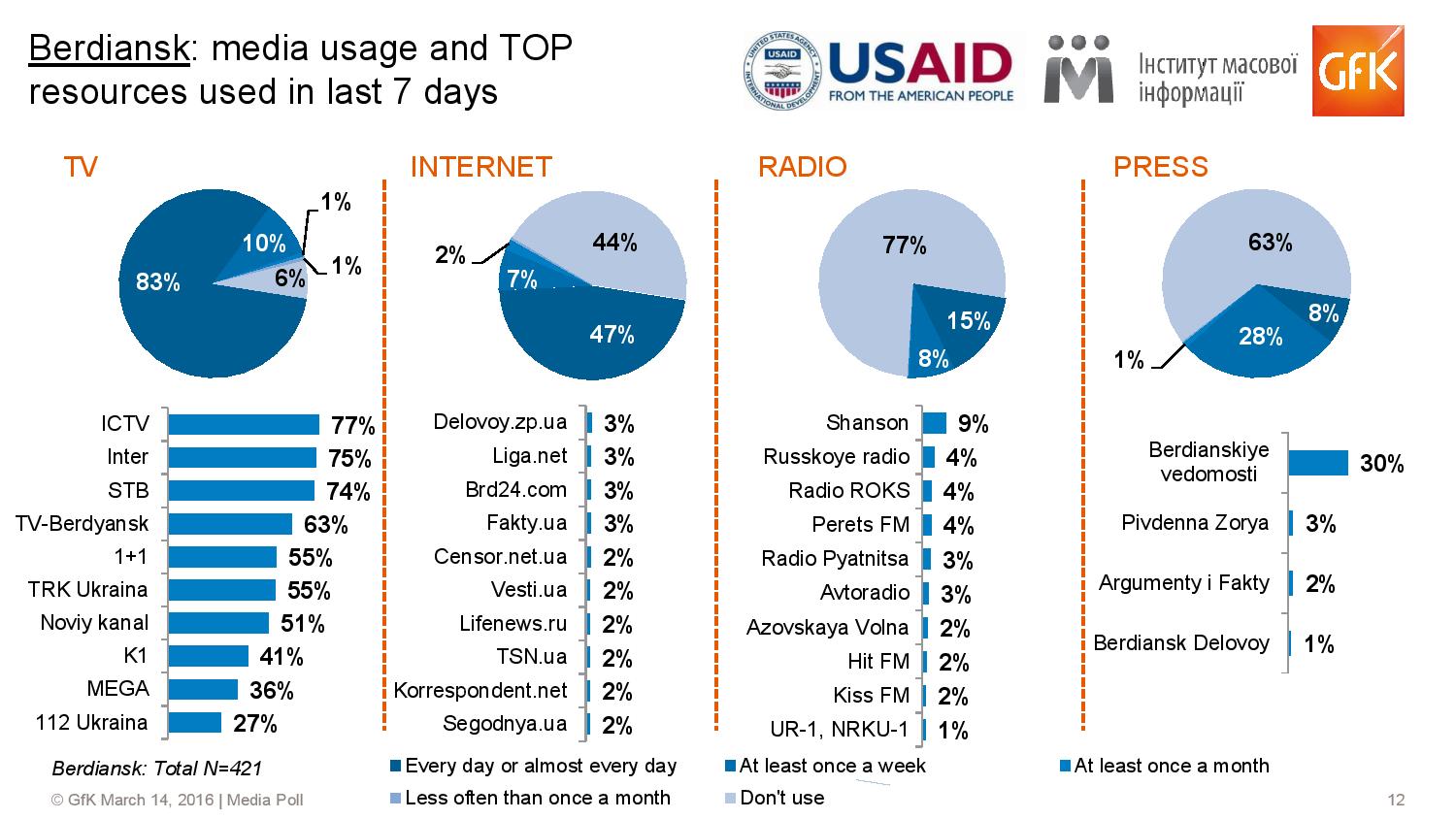 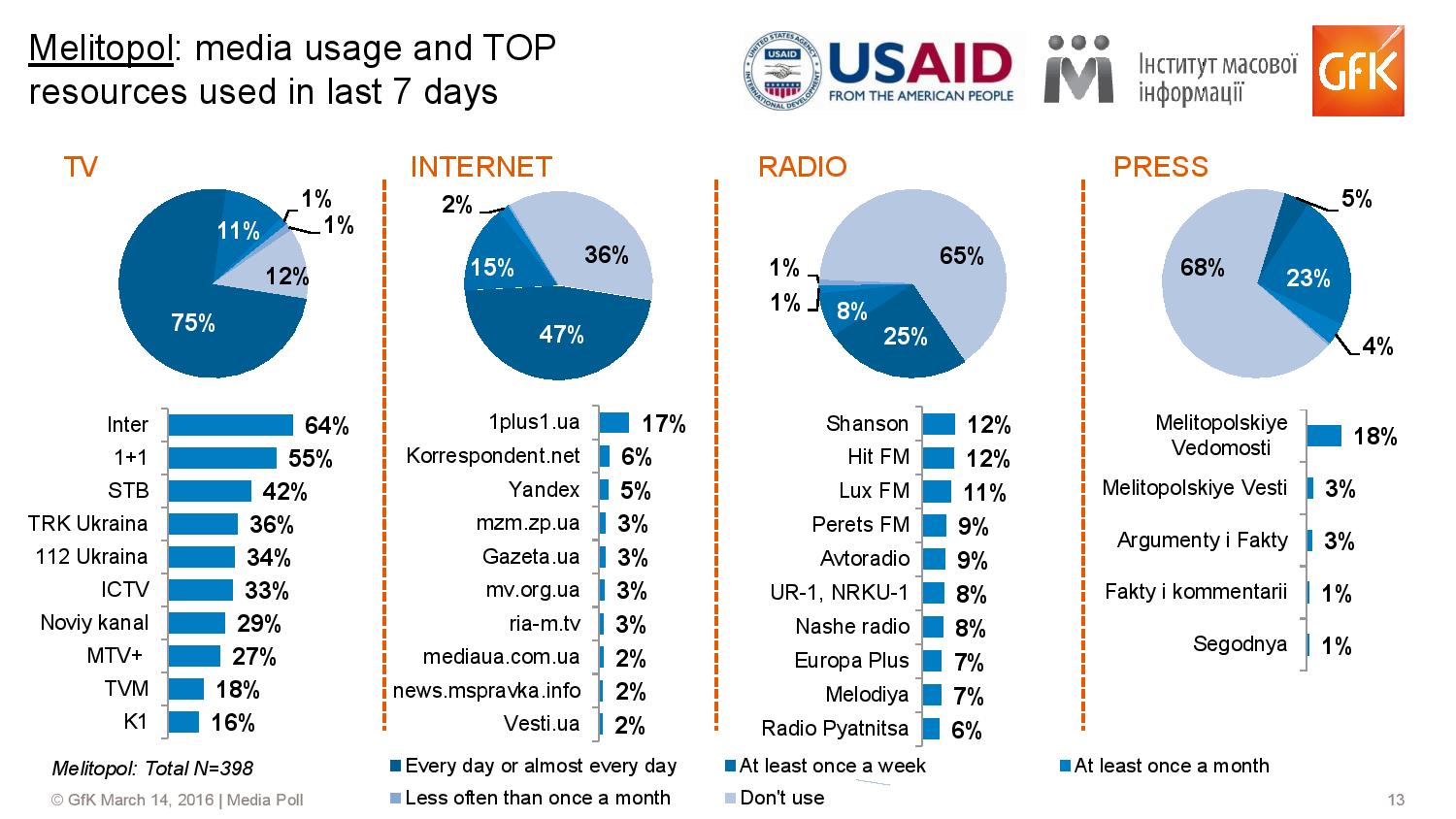 Attempts to reorientate state-owned TV channels Dom and Rada are a backtracking on democratic reforms - Media Movement’s statement
News
Collaborator teachers of Starobilsk district (Luhansk oblast) search schoolchildren's gadgets
Odesa journalist and author Ihor Teryokhin killed in action
Ex-spokeswoman for the Luhansk border guard unit and her husband die in Khmelnytskyi oblast
Russian hackers tried to break into computer networks of some apartment buildings, says SBU
Do you want to be first to learn about the new research of the Institute of Mass Information? Subscribe to the newsletter!