Analysis of media-situation in southern and eastern oblasts of Ukraine: Dnipropetrovsk oblast 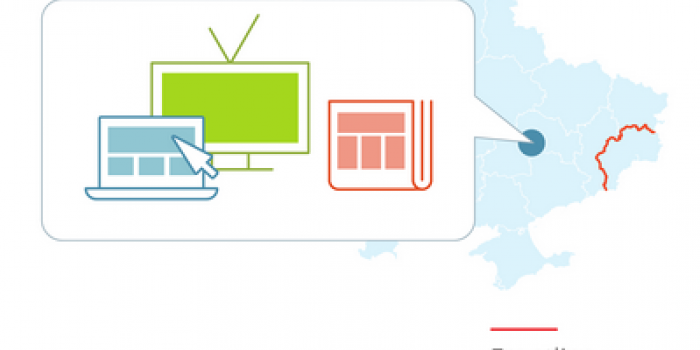 Analysis by Institute of Mass Information

As for a million-strong city, Dnipropetrovsk has a modest number of local media outlets; the main body of mass media outlets comprises of: 7 TV channels, 9 newspapers, and 11 online media outlets.

First and foremost, it should be mentioned that compared to other regions, Dnipropetrovsk has low competition level: that is, not many regional mass media outlets. Considering the political and election campaign factors, it would be practical to divide local media outlets into those controlled by SKM group owned by Rinat Akhmetov and those controlled by the media group «Privat» owned by Ihor Kolomoyskiy. Yet, the number of media outlets, which is part of the «Privat» media group, is not sufficiently competitive in this region, and it is inferior not only compared to Akhmetov's SKM media group, but also to others (for example, the structure owned by Pinchuk), and this situation is observed across different types of mass media outlets.

Promotion of mass media is an important element of making them popular and winning larger audience, so promotion through social networks is one of the ways to achieve these goals. Four channels have groups/communities (in Vkontakte, in the Russian Facebook clone, they are called publics) in social networks; of them, the most active one is Channel 34. Others (for example, the webpage of one of the programs of the Oblast State TV and Radio Company) might exist, but still are not popular and active enough. As to the newspapers, the most popular and active one is the webpage of the newspaper «Litsa» (Russian for «Faces»). Generally, practically all media outlets have publics, yet they are not active enough. Still, there have been cases, when publics become more popular than the media outlet itself («Sobytiya Dnepropetrovska» and «Khronika»).

As to the language used to present news in the mass media of Dnipropetrovsk, all local TV channels broadcast in Ukrainian, yet periodical broadcasting of programs in Russian is something quite normal. Printed press is mainly in Russian. Such communal media outlets as «Zoria» and «Nashe Misto» use Ukrainian language, yet the lion's share of printed news is still in Russian. The printed media outlet that uses only Ukrainian is only «Dniprohrad» and its eponymous website. For this reason, the general picture is as follows: TV is fully Ukrainian-speaking (with an exception of some programs), what cannot be said about press and online media outlets, of which only from 10% to 20% use Ukrainian.

One of possible growth points for independent mass media is start-up initiatives, so these initiatives deserve separate coverage. In particular, in Dnipropetrovsk, the websites «Khronika» and «Zabeba» can be categorized as start-ups. The former cannot be called successful as currently it is not gaining popularity, and was manifesting some activity only in the pre-election and election period – still, it boasts a positive feature: it exists at the cost of self-financing. The second online resource, «Zabeba», is more successful and popular, yet there are fears that it can be used as a tool of influence, as this resource is affiliated with political powers – its acting editor-in-chief Olha Paliy was running the elections from the party «Samopomich».

MEDIA PROPERTY STRUCTURE IN THE REGION

The key players in the media space of Dnipropetrovsk are the country’s two most influential oligarchs Ihor Kolomoyskiy and Rinat Akhmetov.  Local TV Channel 34 is one of most popular, according to the audience share data published on the TV channel’s website. One third of the channel is in municipal ownership, and the rest two thirds are owned by CJSC «Television Service of Dnipropetrovsk», which belongs to «Regional Media Group» of the media holding «Media Group Ukraine», run by Yevhen Liashchenko, under Rinat Akhmetov’s structure SKM.

Channel 9’s legal name is «Privat TB Dnipro», which is self-explanatory. The channel was founded by «Privatbank» and LLC «Firma Sentoza Ltd.», which is also owned by «Privat» group.

The newspaper «Dnepropetrovskaya Panorama» and the website «Dniprograd» are also believed to be affiliated with «Privat» group and Dnipropetrovsk’s ex-governor.

One of the examples of local media businesses is the TV channel IRT (and its satellite channel «Domashny Ochag» (Hearth)), the advertising agency «Reklamne Pole» and the website «Dnepr.Info», – these media outlets are believed to be affiliated with Oleksander Malynovsky.

The TV channel Channel 11 (the TV (the TV and Radio Company «Sterkh») is owned by Pinchuk's entities.

In the last two years in Dnipropetrovsk, several websites with unidentified owners have appeared. While the situation with «Dnipropetrovsk Panorama» is quite clear, such web resources as glavnoe.dp.ua and zabeba.li remain «dark horses». The structure of the websites proves that they are not business media projects. These websites practically do not try to monetize their content on the Internet. 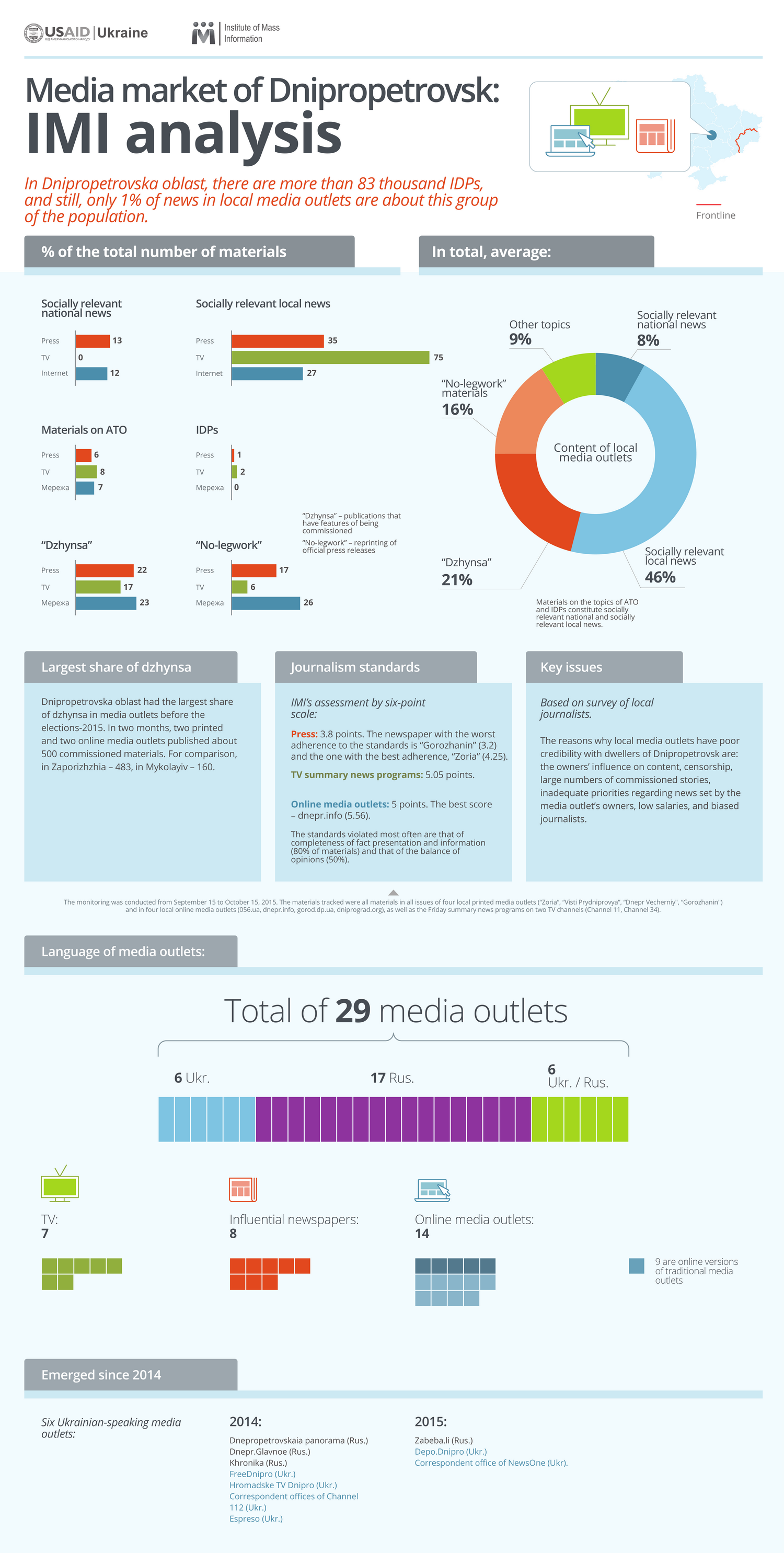 In Dnipropetrovsk, we can trace an average level of coverage of socially relevant information of the national level – 8% from the total number of materials; this percentage is 13% and 12% for printed and online media, correspondingly, and no such materials were registered on TV.

Almost one half of all materials is dedicated to local socially relevant topics (46%), where the largest portion of such information is covered on TV – 75%, and in printed and online mass media outlets – 35% and 27%, correspondingly.

Taking into account the events that take place on the temporarily occupied territories and in the area of the Anti-Terrorist Operation, covering such events is critical, especially in the media outlets of the oblast center located in close vicinity to such events. Of all surveyed cities, Dnipropetrovsk mass media demonstrate the highest indicator as to the number of materials dedicated to the ATO – 7%. This topic is most often mentioned on TV – 8%, and in press and in online media – 6% and 7%, correspondingly. It should be mentioned that the general level of raising this topic in press is quite low, and only the media outlet «Visti Prydniprovya», which is the most popular in Dnipropetrovsk, has an unusually high percentage of published materials about the ATO in percentage to all materials published (16%).

For the same reason the issue of the ATO is important, no less important is coverage of the topic of internally displaced people (IDPs from Donetska and Luhanska oblasts, and from the territory of the Autonomous Republic of Crimea). Dnipropetrovsk has the lowest indicator of covering the topics about IDPs, which is just 1%. In press and on television, this topic is raised, correspondingly, in 1% and 2% of all materials, and in the online media outlets, the topic of IDPs was mentioned the least (the only one of the four surveyed online media outlets, gorod.dp.ua, showed presence of 1% of the materials on this topic, all other online media outlets had 0%). Also, the topic of IDPs was never mentioned on Channel 34 and in in half of the surveyed printed editions («Dnepr Vecherniy» and «Gorozhanin»).

Qualitative analysis of the content of Dnipropetrovsk mass media showed that the standard of completeness of fact presentation and information related to the problem covered is the one violated most often – in 80% of materials; standard of the balance of opinions is on the second place – violated in half of the materials (50%). By the level of basic standards listed in the Methodology, printed press of Dnipropetrovsk was rated at 3.8 points of 6.0 possible. The lowest adherence to the standards was in the media outlet «Gorozhanin», with the rating of 3.2, and the best printed edition in Dnipropetrovsk was «Zoria», with the rating of 4.25 points. As to the level of adherence to journalist standards on TV, two surveyed TV channels were rated by IMI experts at 5.05 points, which is the highest indicator for all mass media in Dnipropetrovsk. Just like in all other media outlets, the most often violated standard on TV was the standard of completeness of presentation of facts and balance of opinions. Both monitored TV channels showed almost identical results (the difference in rating was less than 0.2 points). The result of the survey of adherence to journalist standards in online media is just a bit lower than on TV – 5 points sharp, out of possible 6. Online media outlets have the highest rating for promptness of publication, which is not surprising – this was to be expected. In other categories, online media outlets have the same most often encountered problems – with the standard of completeness of fact presentation and balance of opinion in their materials. The best rating among online resources was that of dnepr.info – 5.53, and the worst was 056.ua – 4.6 points.

ASSESSMENT OF SITUATION BY LOCAL JOURNALISTS

IMI’s survey of Dnipropetrovsk journalists (16 local journalists from different types of mass media participated by filling in questionnaires offered by IMI) showed that the content has a rather low level of credibility from the media community. The highest credibility level is that of Dnipropetrovsk TV, as, to the survey participants’ opinion, they have the most objective news there, no stereotypes and a modern approach. Among the main reasons for lack of credibility, they name the owners’ influence on content, censorship, large number of commissioned stories, inadequate priorities regarding news set by the media outlet’s owners, low salaries, and biased journalists. In addition, they named such problems as provincialism, conspiracy of silence of mass media owners and politicians, and journalists’ reluctance to learn and grow professionally.

All surveyed journalists mentioned that they have a quite critical attitude to local news, as they understand why this or that media outlet publishes one material or the other. Local mass media are oversaturated with news, yet they lack high-quality information. The surveyed complained about lack of good-quality news that go beyond stating facts or presenting one paragraph with a provocative headline. The majority of local news cover crimes, scandals, and politics.

Practically, all journalists use the aggregator ukr.net due to convenience of information sorting, 40% of journalists read news at the websites dnepr.info, 30% – at 056.ua, 15% – at «Litsa», 10% – at vgorode, and 5% – zabeba, gorod.dp.ua, and Hromadske.Dnipro. Journalists do not trust anyone completely, but 80% trust the media outlet «Hromadske.Dnipro» the most – due to absence of censorship, independence, modern approach and trusting their journalists. The majority of journalists feel that owners do influence the content.

Journalists of Dnipropetrovsk complain that officials treat them as «a loudspeaker» and try to feed them distorted information. The journalists receive information from different sources; at average, 45% – from personal messages, 20% – from social networks (out of them 15% – from Facebook), 10% – from websites of governmental agencies and related websites, 5% – from press releases and announcements they receive from mailing lists. Usually, the journalists are not able to choose topics by themselves, the topics are imposed on them by editors. The mass media staff complains that the highest priority for editors is scandalous topics used to boost the number of readership; the following by popularity is politics, corruption, and social issues. The journalists do not generally write analytical materials. The journalists can and want to write about local topics more, yet they complain about low salaries. They feel they are affected by censorship, if they write high-profile materials. Self-censorship is very common.

The journalists openly say that in the elections period, city dwellers were able to view events only through the eyes of Kolomoiskiy, Firtash, Akhmetov, and other mass media owners. They also overtly call the regional city journalism a mean and dirty business due to mass media being dependent on politicians and oligarchs. They also mention that journalists lost the ability to ask the officials sharp questions; they just write what they are told to, and do not try to investigate the issue. 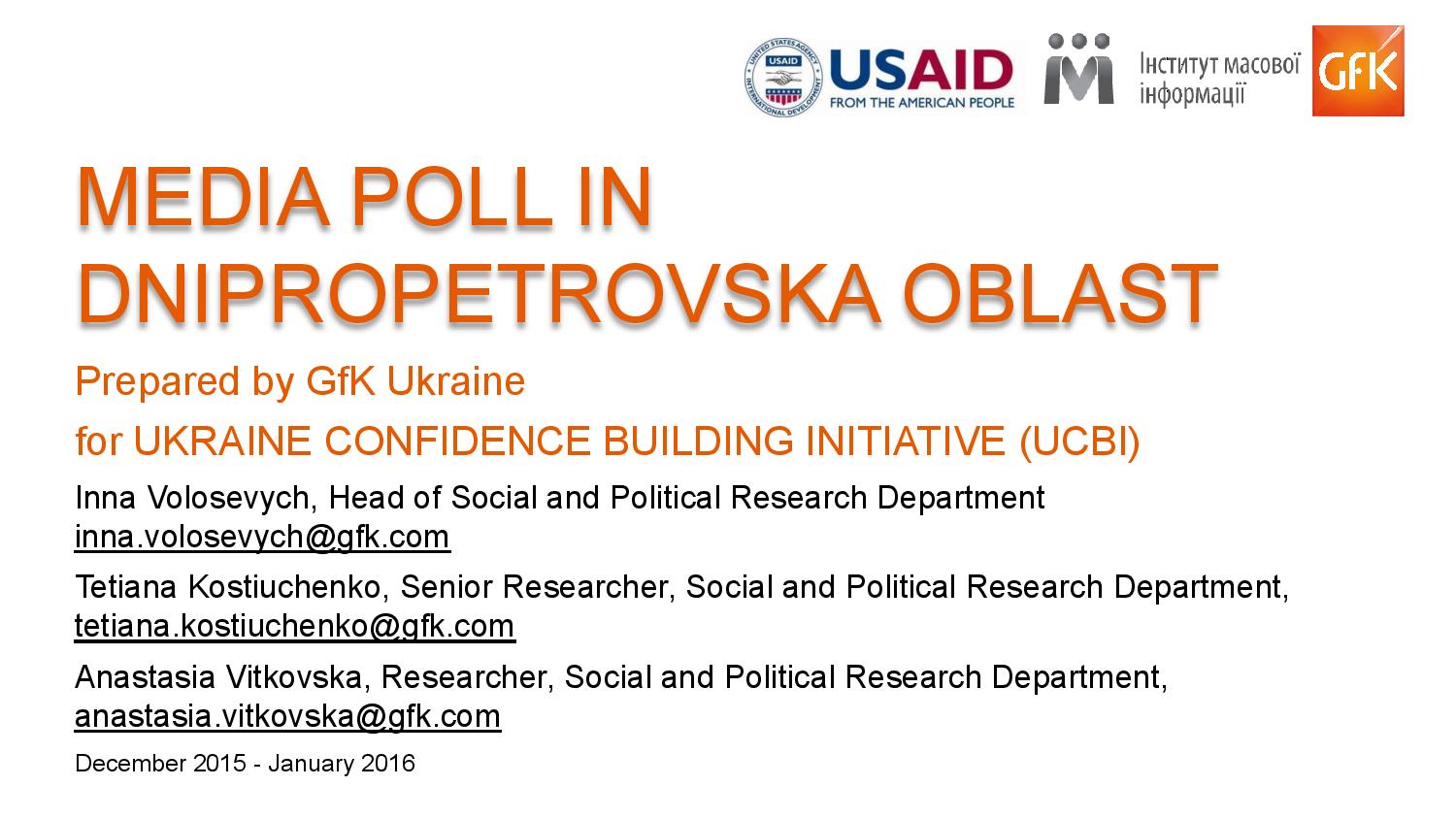 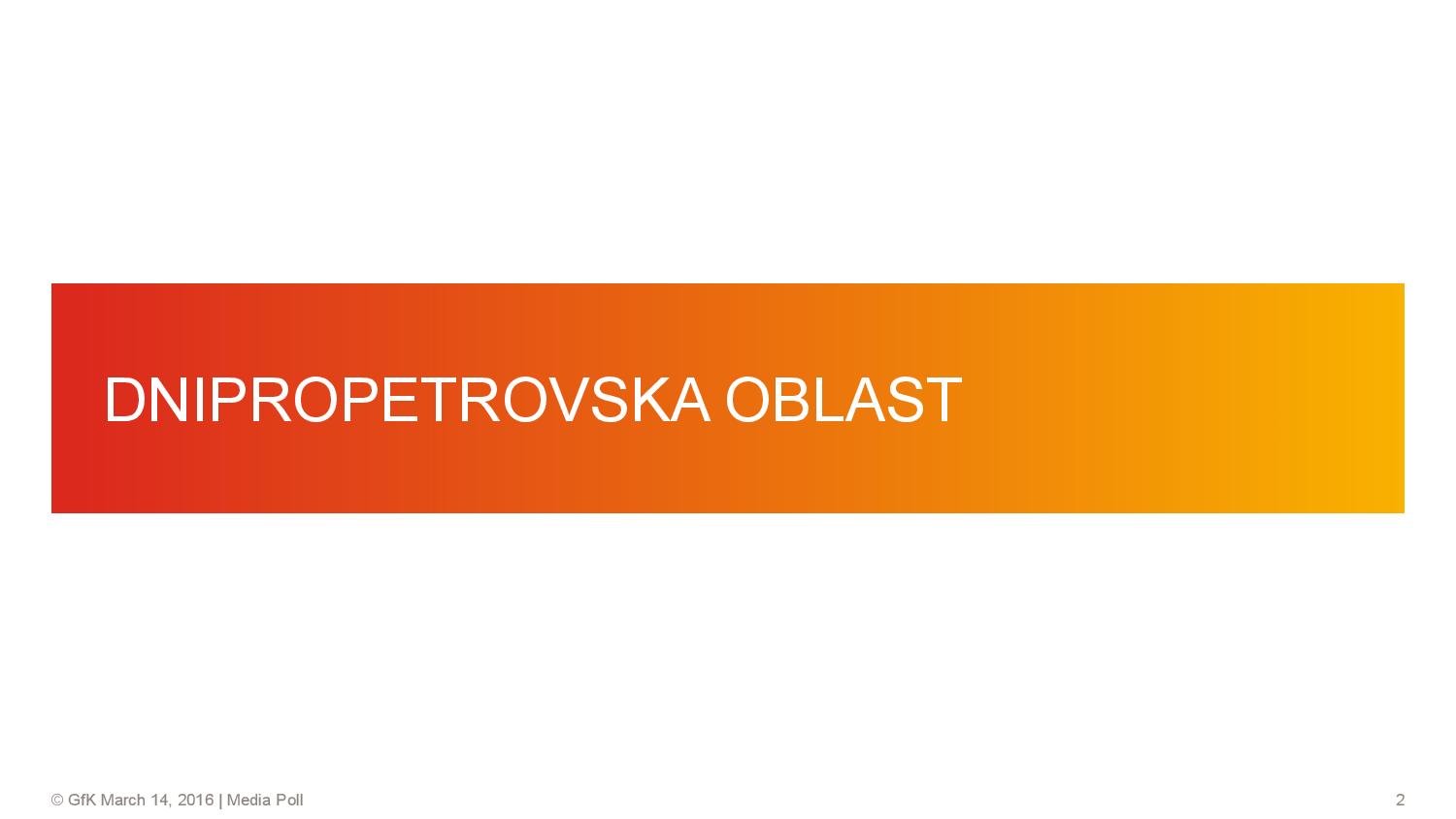 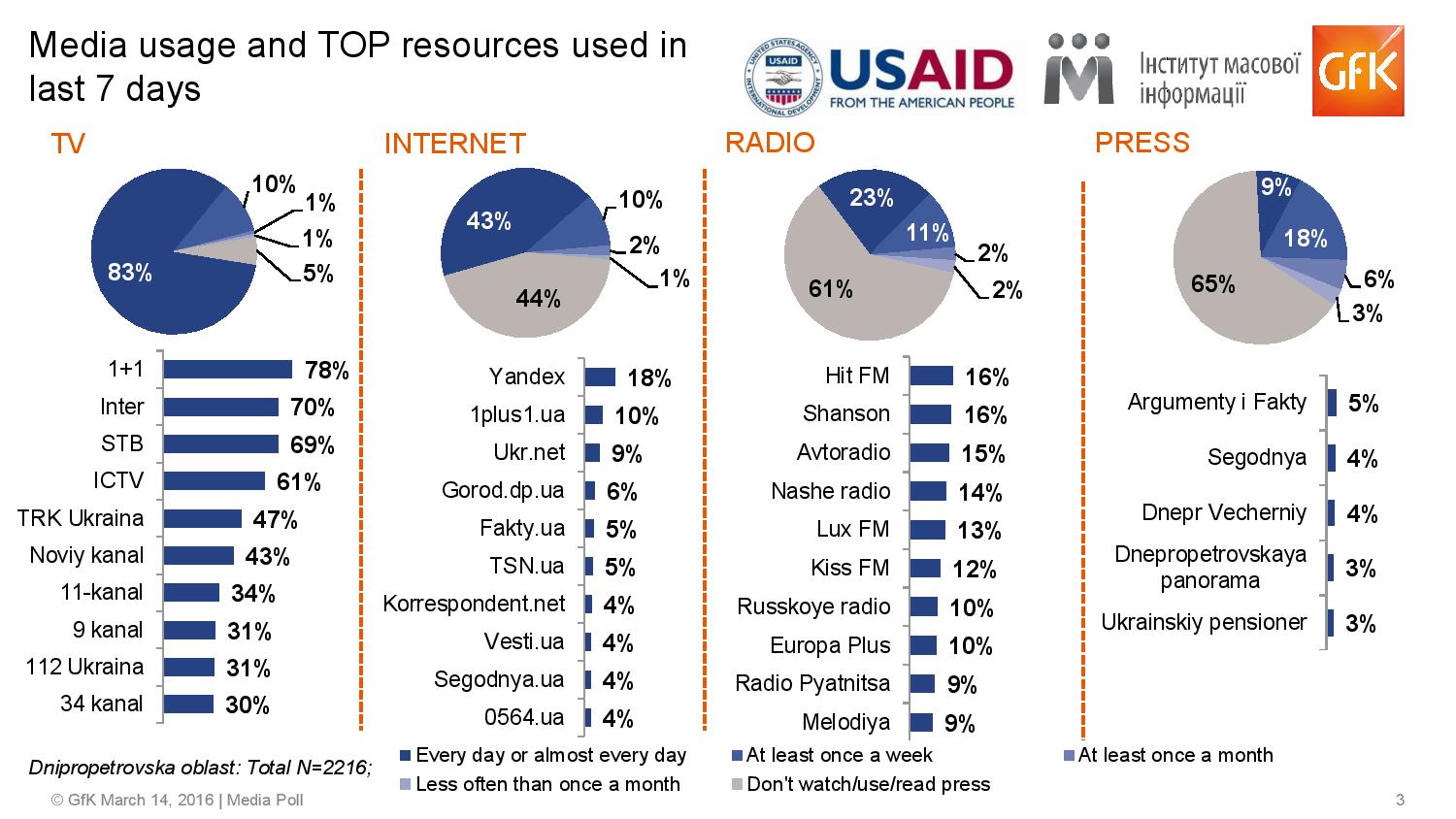 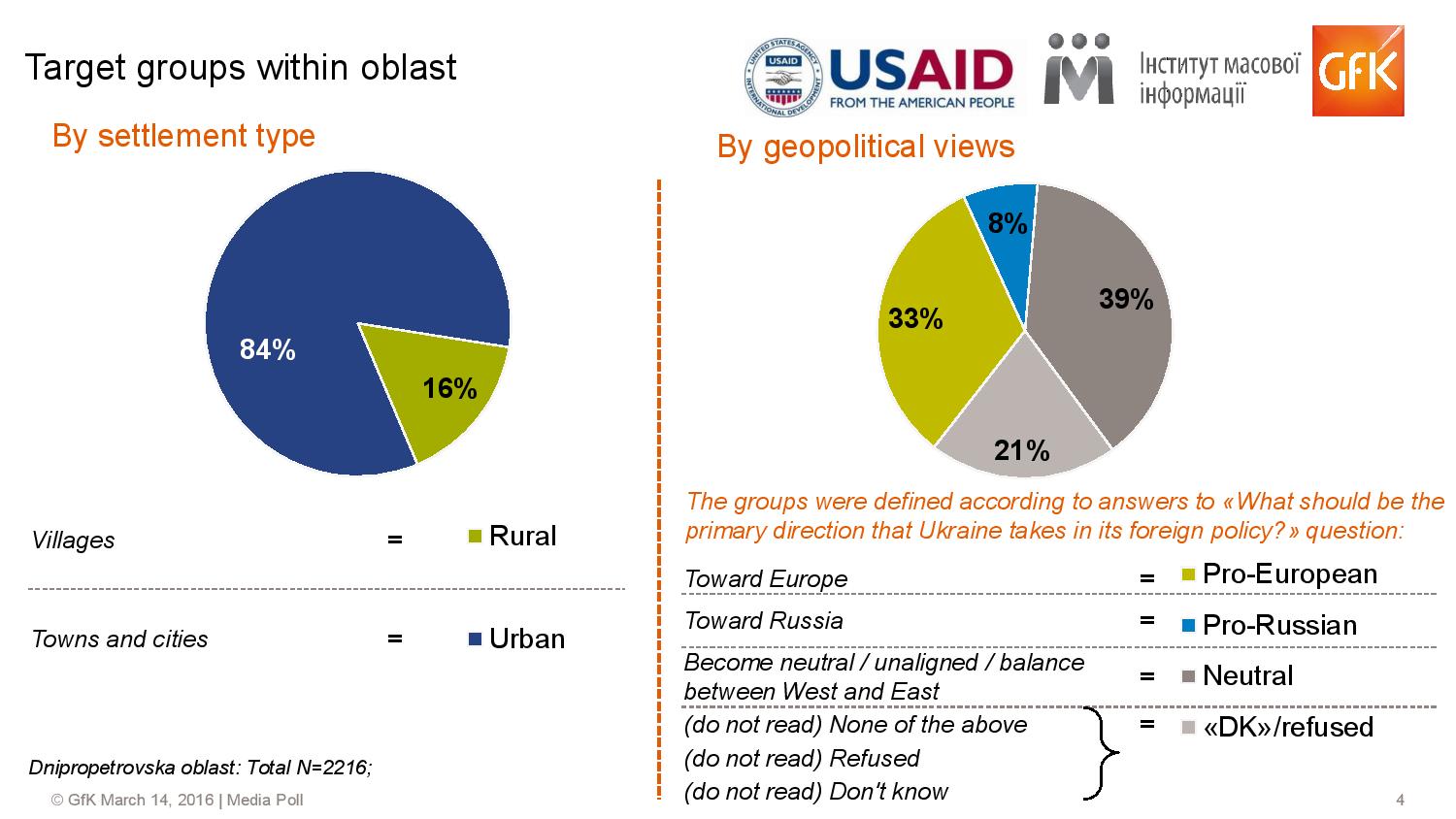 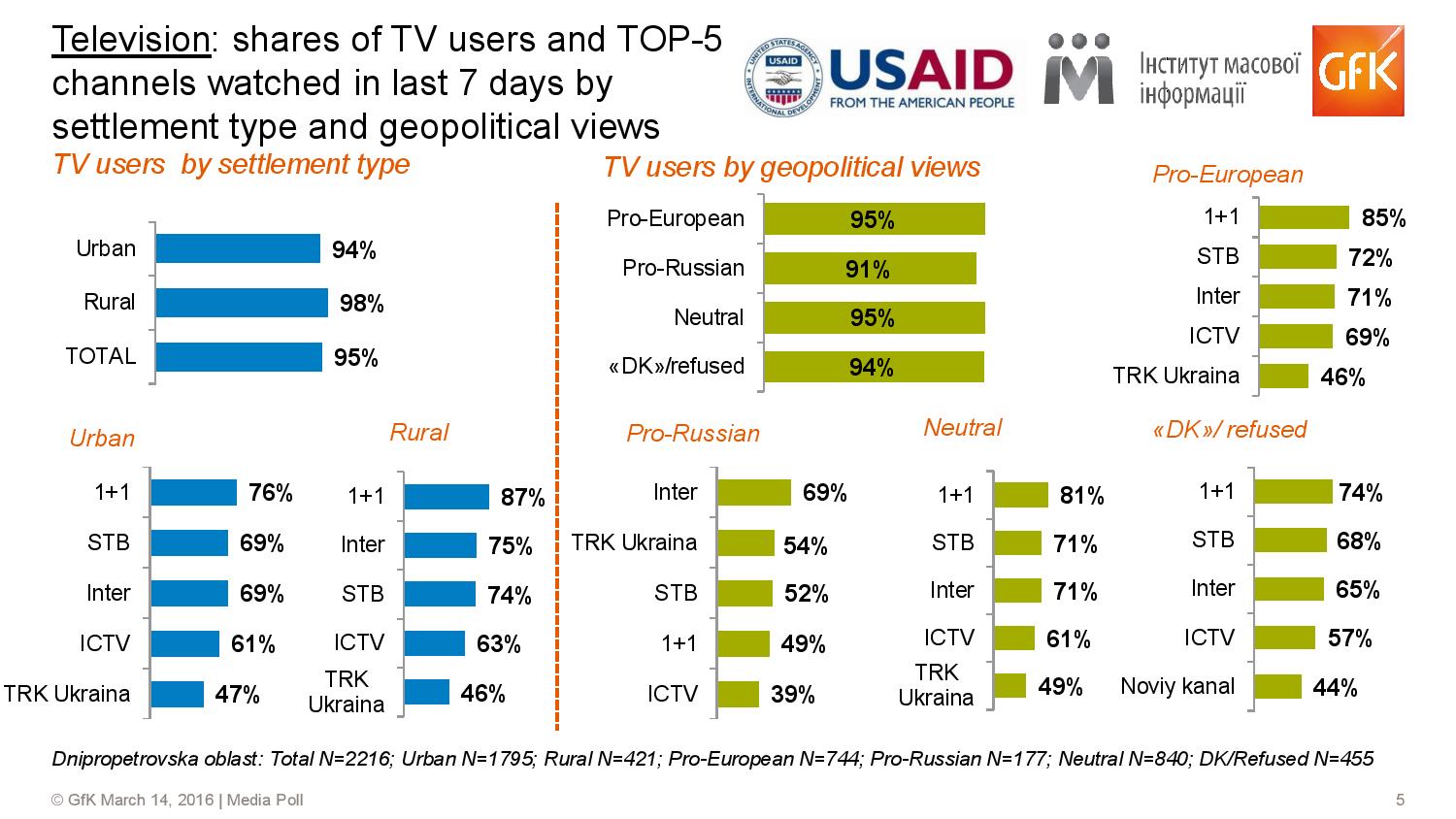 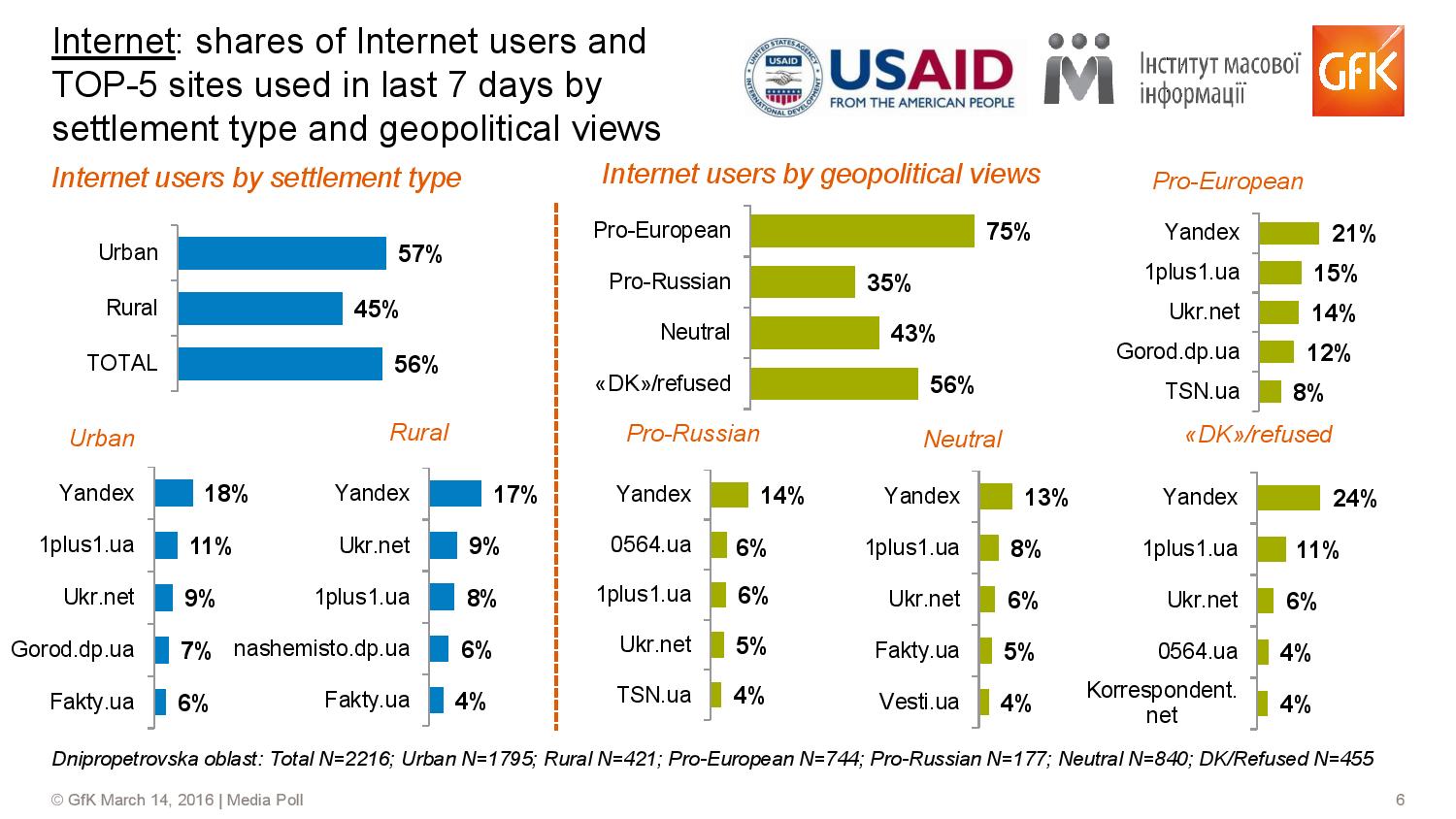 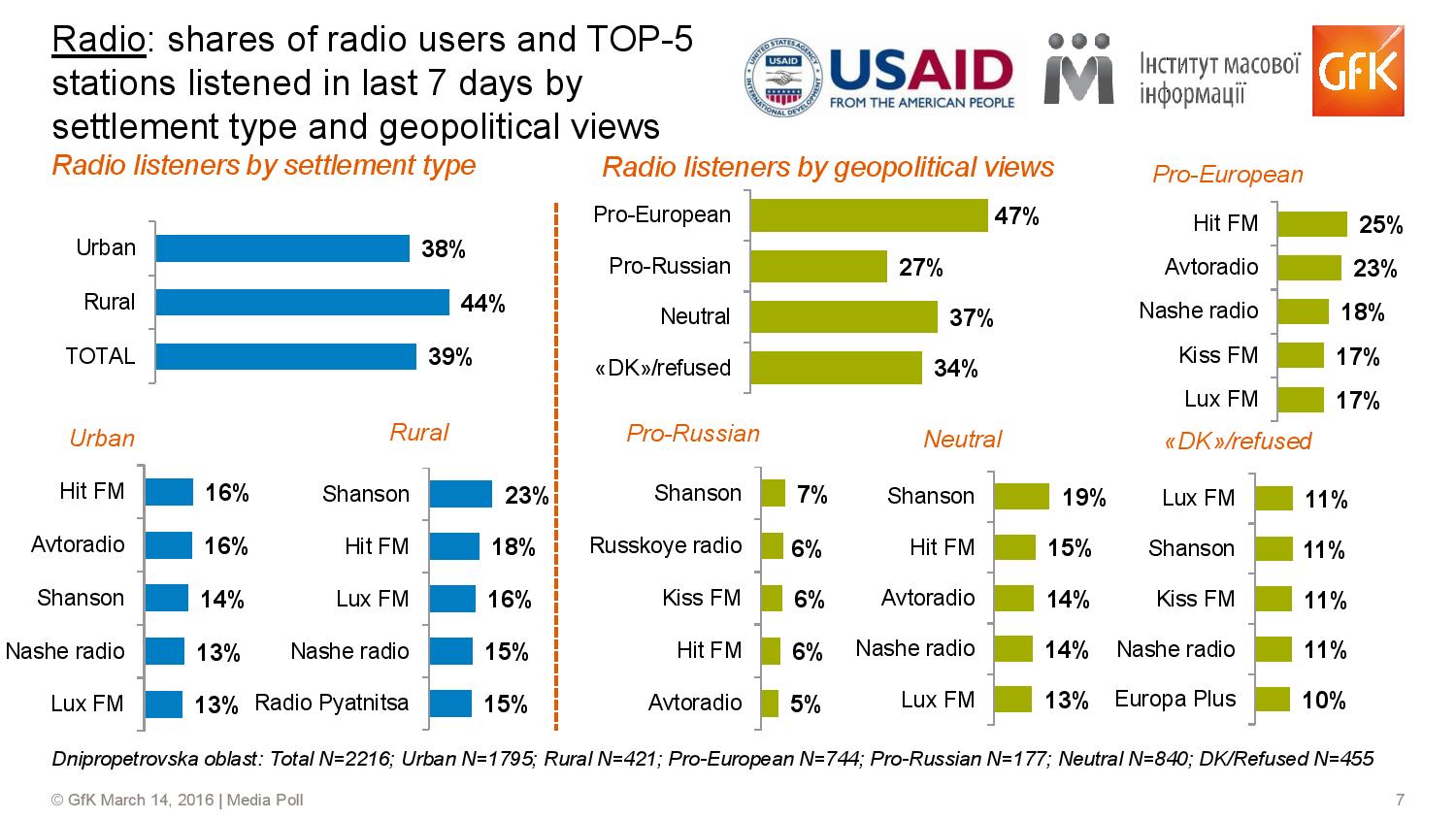 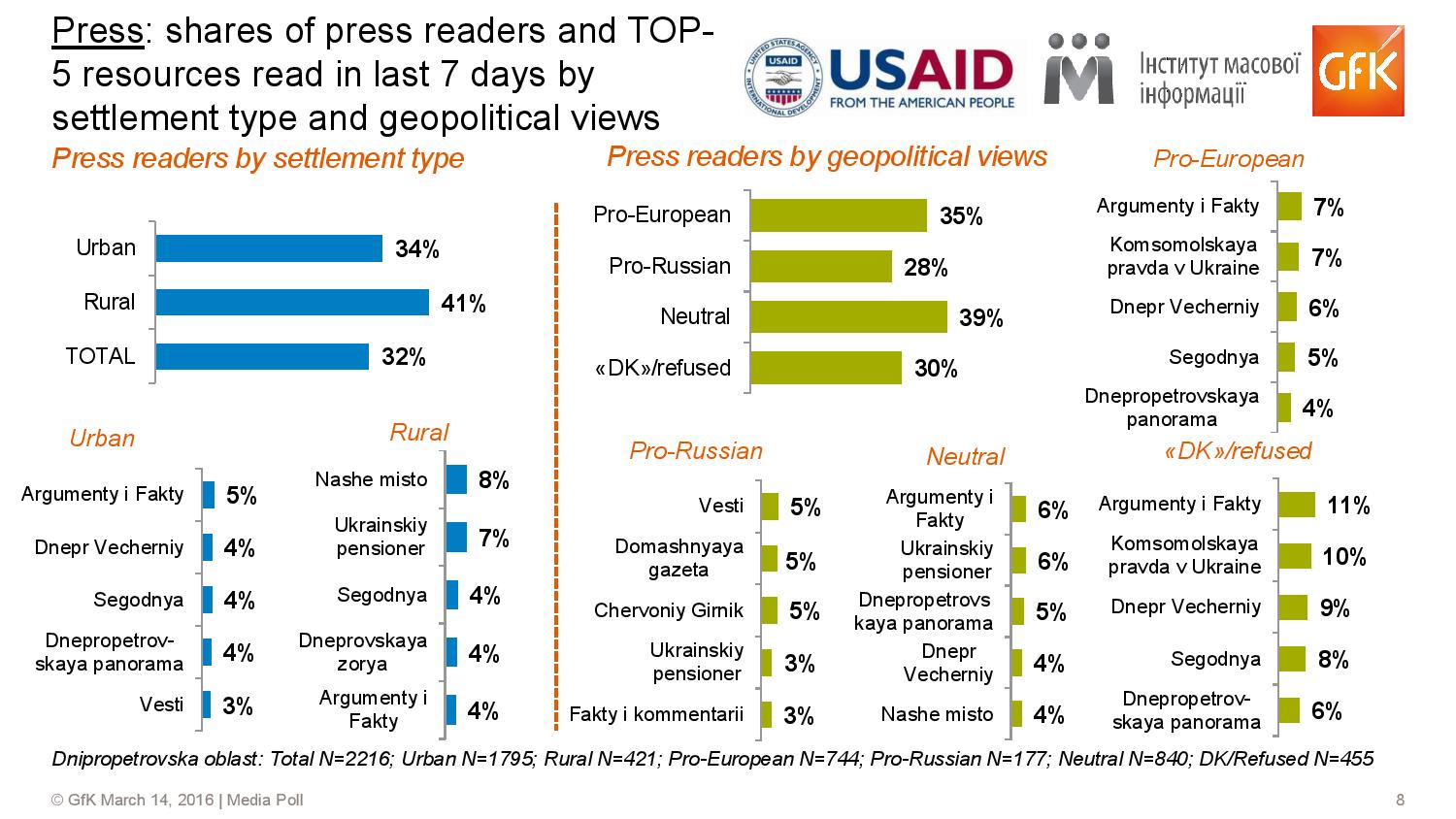 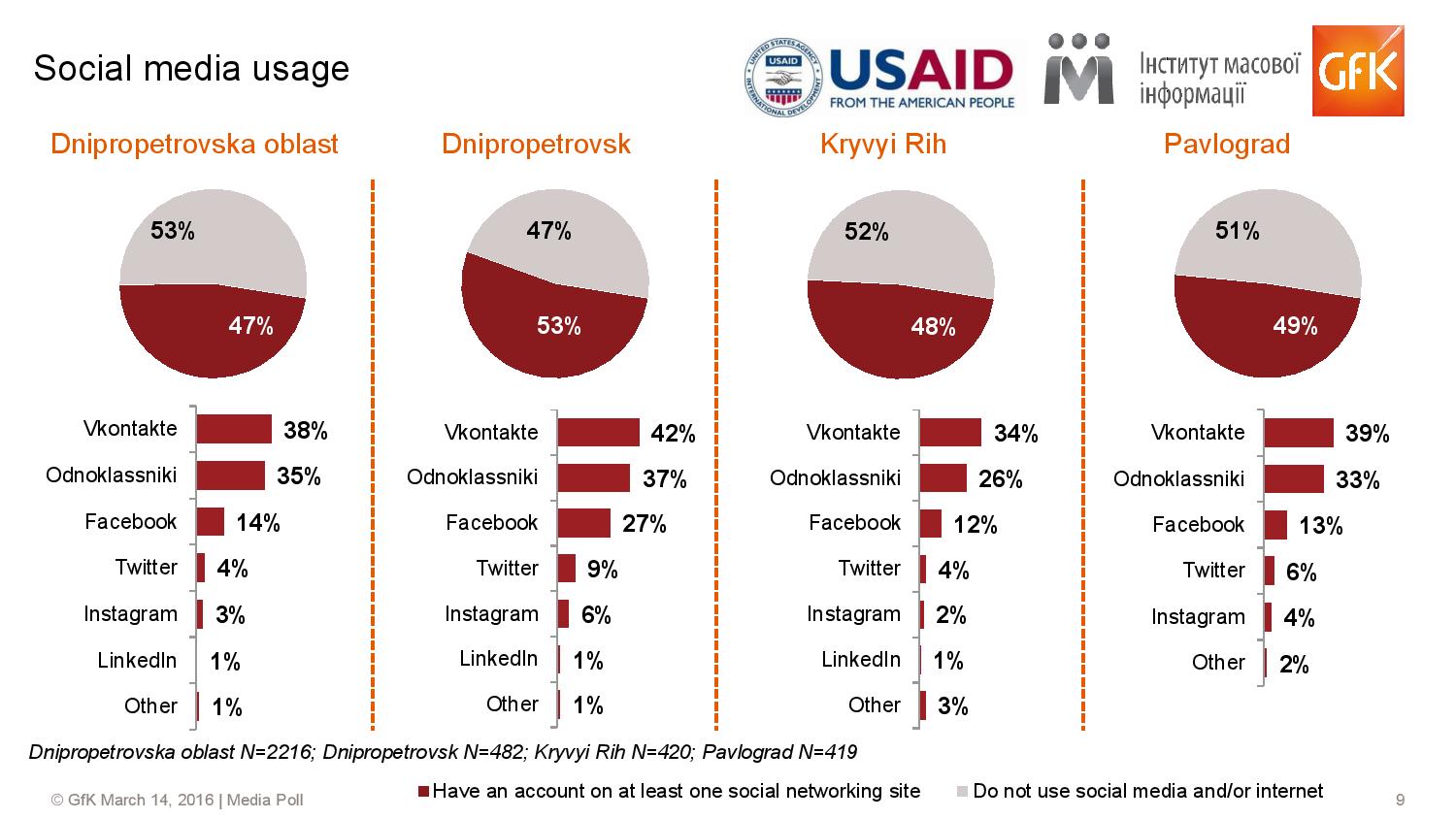 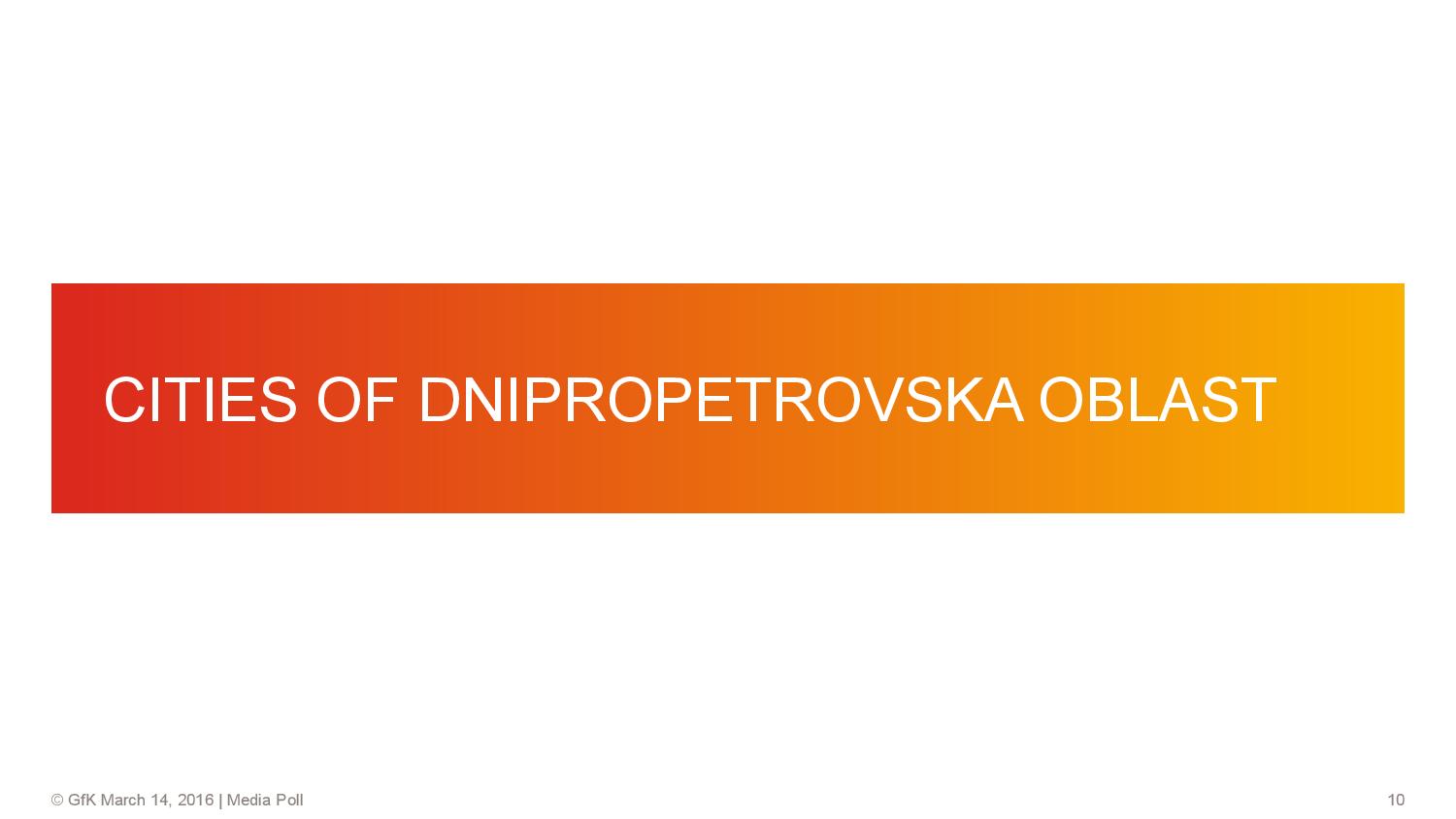 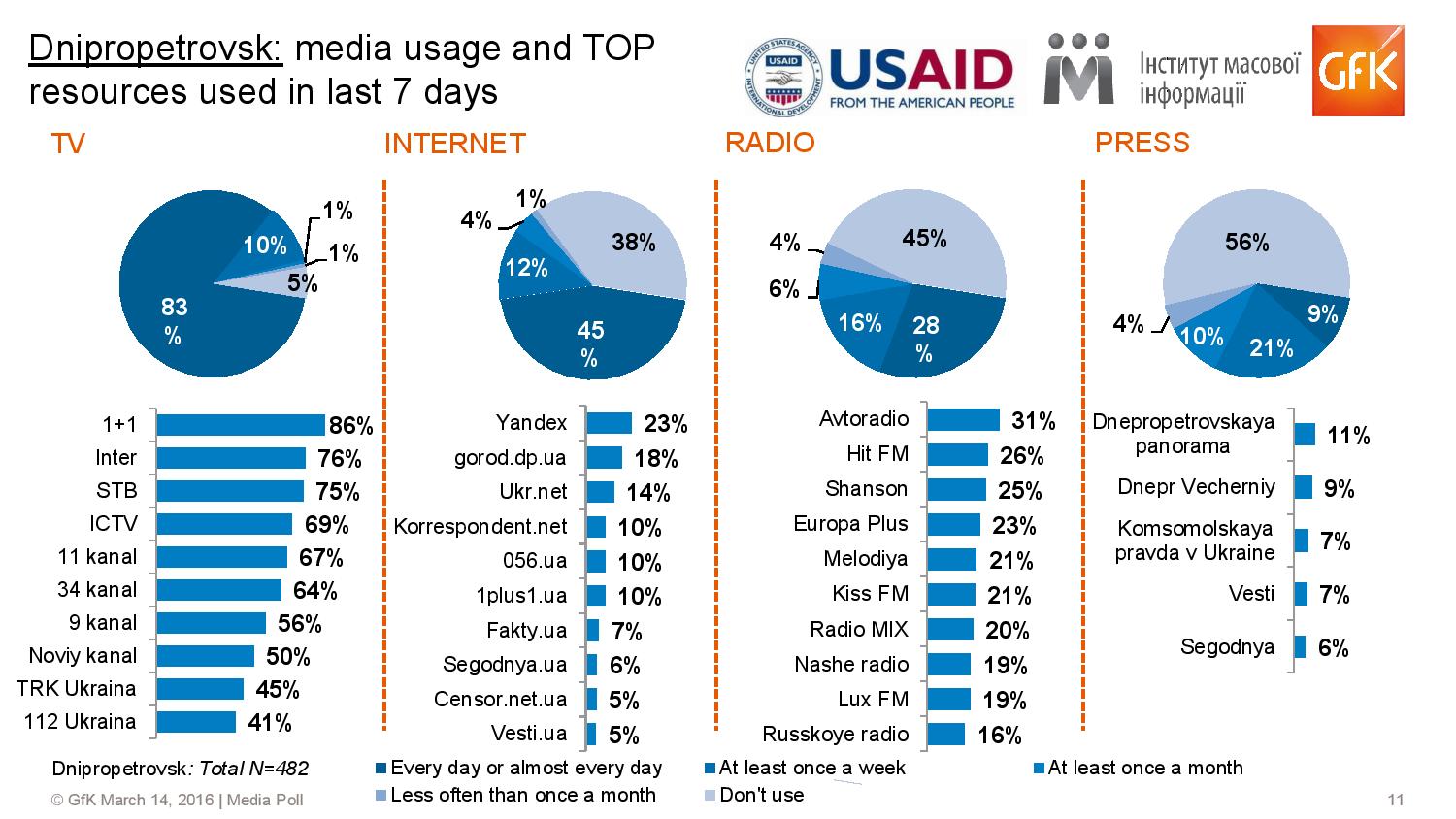 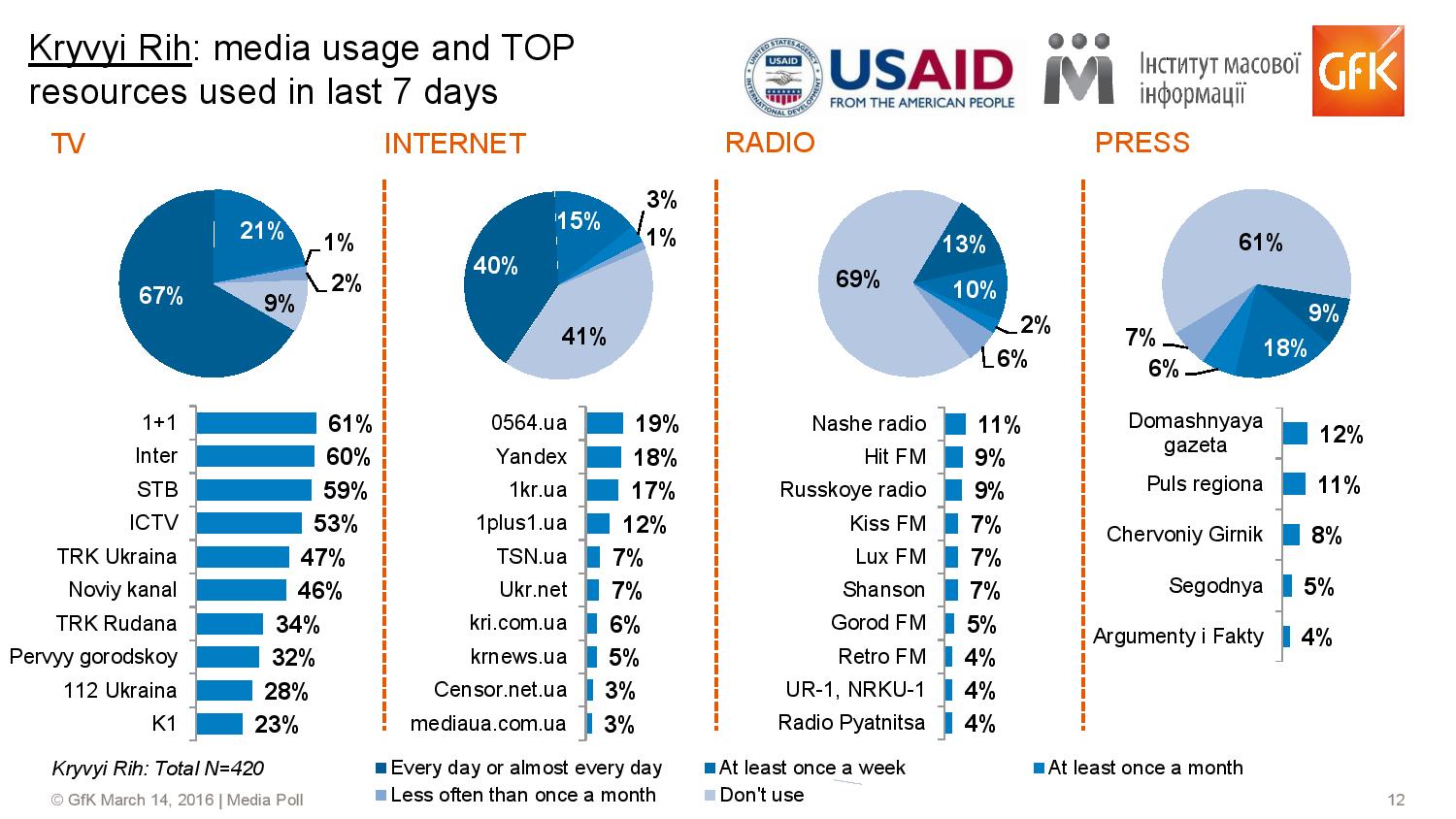 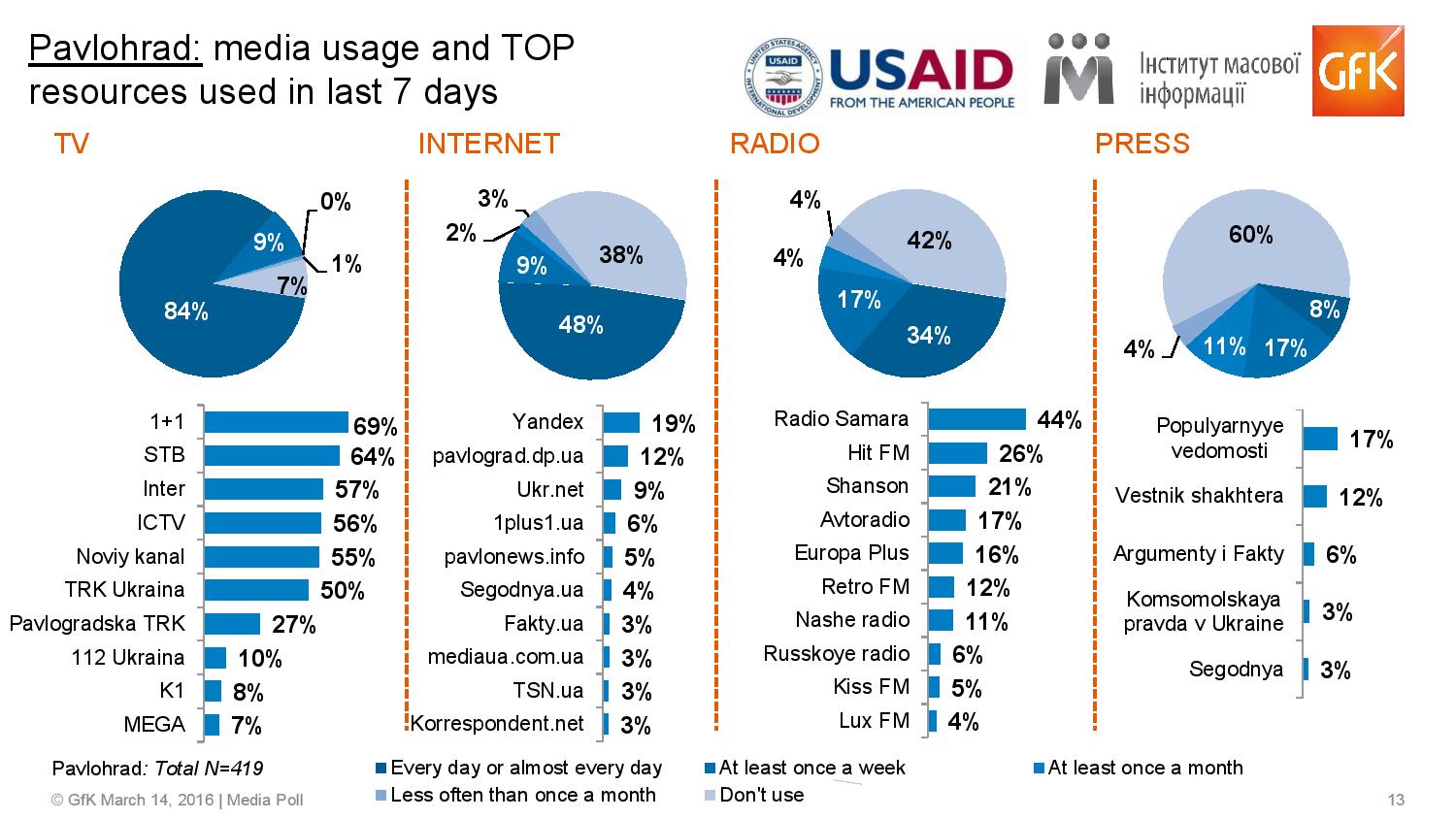 Attempts to reorientate state-owned TV channels Dom and Rada are a backtracking on democratic reforms - Media Movement’s statement
News
Russian hackers tried to break into computer networks of some apartment buildings, says SBU
Russians are spreading fake news about the deportation of potential conscripts, says CCD
Russians deliberately fire at Česká Televize journalists near Bakhmut
Russian propaganda about the war in Ukraine will not succeed – EU
Do you want to be first to learn about the new research of the Institute of Mass Information? Subscribe to the newsletter!