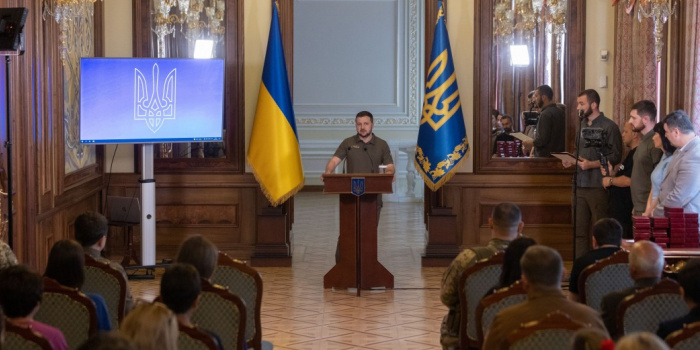 On the occasion of the Journalist's Day, President of Ukraine Volodymyr Zelensky presented state awards to Ukrainian media workers and family members of media representatives who died as a result of the full-scale russian invasion.

Volodymyr Zelenskyy thanked all the journalists who have been "doing their job with talent, humanity and sincerity, both in front of the camera and behind it" during the 103 days of this invasion and the eight years of the russian federation's war against Ukraine

"I do not want to say too many words and take your time. I think journalists know best what the price of words and the price of time is. Especially at this difficult time for our state – the time of war," he said.

The President thanked the journalists who, like the Armed Forces and the entire Ukrainian people, are defending our state and bringing the truth to people.

"You bring the truth and important information – very powerful, important meanings that can be a great advantage for our country in this fight, which we will definitely win," he said.

Zelenskyy presented state awards for significant contribution to the development of journalism, high professionalism and conscientious work. He also noted that since February 24, 32 Ukrainian and foreign media workers have been killed as a result of russia's armed aggression in Ukraine. The President mentioned each of them by name; the attendees honored their memory with a moment of silence.

The president also named Lithuanian director and documentary filmmaker Mantas Kvedaravičius, who was killed in Mariupol; cameraman of Lutsk's "Avers" channel Kostyantyn Kits, who died defending Ukraine on the frontline; Denys Kotenko, Ministry of Veterans' Affairs press service employee who was killed on March 24 in a battle with the russian occupiers near Kyiv; Ukrainian freelance journalist Oleksandra Kuvshynova, who died on March 14 together with Pierre Zakrzewski in Horenka village, Kyiv region; photojournalist, war correspondent Maxim Levin, who went missing on March 13 and was found dead on April 1.

The head of state also mentioned French BFM TV journalist Frederic Leclerc-Imhoff, who died of shrapnel wounds during the shelling while covering the evacuation of civilians from the Ukrainian city of Severodonetsk on May 30; actor and "Dom" TV channel host Pavlo Li, who joined the territorial defence forces at the beginning of the war and was killed on March 6 near Irpin during the evacuation of the population; KNK Media journalist Oleksandr Lytkin, who was killed on March 13 in Romanivka village by a russian shelling attack; Oleksandr Makhov, journalist with "Ukraine," "Ukraine24," and "Dom" channels, who went to the frontline and was killed on May 4 by the enemy's shelling; communications officer and serviceman Maksym Medinskyy, who died tragically while defending the country; Roman Nezhyborets, a video engineer for the Chernihiv-based Ditynets channel, who was killed by the R]russian military in April in Yahidne village near Chernihiv; Yuriy Oliynyk, Channel 24 cameraman who died on March 23 in a battle near Popasna, Luhansk region.

Volodymyr Zelensky also named graphic artist, painter, culturologist, member of the National Union of Journalists of Ukraine, laureate of journalistic awards Serhiy Pushchenko, who was a volunteer and ATO veteran and was killed on March 2 in Vasylkiv together with his fellow territorial defence fighters; LIVE cameraman Yevhen Sakun, who died on March 1 in a russian missile strike on a TV tower in Kyiv; documentarist, former The New York Times correspondent, Time reporter Brent Renaud, who was shot dead by russian troops on March 13 at a checkpoint in Irpin.

In addition, after the start of the full-scale russian invasion, former manager of the "Suspilne Cherkasy" branch and serviceman Yevhen Starynets was killed in the battles for Popasna, Luhansk region, on April 30. Natalia Kharakoz, journalist, author, member of NUJU and the National Union of Writers of Ukraine, head of the "Azovye" literary club, died in Mariupol under russian blockade. Dilerbek Shakirov, civilian journalist with "Navkolo Tebe" news weekly, was shot dead on February 26 in the suburbs of Kherson. Oleh Yakunin, editor of Zaporizhzhia website misto.zp.ua, died on March 18 while defending Ukraine from the russian occupiers.