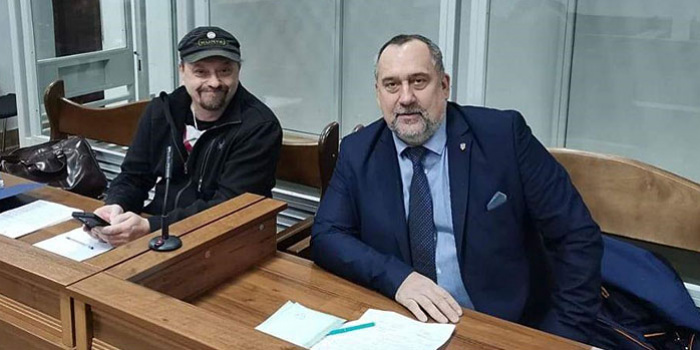 On June 30, the Shevchenkivsky District Court of Kyiv is to consider the lawsuit filed by the President Volodymyr Zelensky against the artist, host of the Pryamyy TV channel Serhiy Poyarkov, as Interfax-Ukraine reported.

The lawsuit is dealing with the "threat or violence against a statesman or public figure."

In compliance with the Art. 346 of the Criminal code, threat of murder, inflicting harm to health, destruction or damage of property, and also kidnapping or imprisonment concerning the President of Ukraine and other senior officials of the state, and also their close relatives, made in connection with their state or public activity, is punishable by restriction or imprisonment for up to five years.

IMI reported, on May 28, the blogger Serhiy Poyarkov has been indicted within criminal proceeding for threats to assassinate the president Volodymyr Zelensky, as Detektor Media reported.

"You would see the eyes of the SBU investigator, who sloughed off of communication with me today and transferred it all to the prosecutor's office again. Today is a holiday in the SBU, they finally got rid of this case," Poyarkov told the publication.

Serhiy Poyarkov is accused of a crime under Part 1 of Article 346 ("Threat or violence against a statesman or public figure") of the Criminal Code of Ukraine. This article entails a punishment of up to five years in prison.

According to Poyarkov, the case has been under investigation since October 2019 because of one of his parodies on the YouTube channel, which mentioned the president Volodymyr Zelensky. In January 2020, the SBU pressed suspicion of threatening to assassinate the head of state to Serhiy Poyarkov. On January 29, the Shevchenkivskyi District Court of Kyiv, choosing a measure of restraint, released Serhiy Poyarkov on personal bail.

Sergei Poyarkov denied that his actions were criminal: "There was no crime or attempt. Parody cannot be considered as a crime."

He claimed that President Volodymyr Zelensky twice testified in the case: "Zelensky testified back in October that he was terribly frightened by my vlogs, he was afraid and believed that my parodies had a mortal threat to his life. Then, in March he also testified and said he was scared when I showed samples of parodies of Western presidents. He has an hysterical fear when he is parodied. "

At the same time, the president’s spokeswoman Yulia Mendel could not comment on the information that Zelensky testified twice in this case. "We don't have that information. It's kind of nonsense," she told Media Detector.

Poyarkov found this case was artificially made. "I am sure that this will be the most caricatured trial in the history of Ukrainian jurisprudence. I am confident that in the course of court hearings we will be able to overshadow the Quarter 95," he said.

In addition, the blogger suggested that the Ministry of Internal Affairs refused to investigate the case, so it was handed over to the SBU, although the article on threats is not under SBU’s juridsiction. Oleksandr Lytvyn, lawyer with the Center for Countering Corruption, confirmed that the case under this article had to be probed by the National Police (a unit of the Ministry of Internal Affairs). "The SBU often takes away the cases it wants, but this article is not under its jurisdiction," he told asked by Detector Media.

Poyarkov does not reject the option, he would file complaint for official malfeasance.

Poyarkov told that his vlog for which the case has been initiated, is still available on YouTube, the video platform did not block it (video timecode from 5:33 to 6:20).

Earlier, Serhiy Poyarkov was also the host of the Pryamyy TV channel where conducted the author's program "Poyarkov’s News". The program no longer comes out. Its latest edition on the website and YouTube of Peyamy TV is dated of January 10.

On January 9, the National Council on Television and Radio Broadcasting fixed an unscheduled inspection of Pryamyy TV channel following a complaint by citizen Kasyanenko against host Serhiy Poyarkov, who insulted the president Volodymyr Zelensky. It was about the edition of the program "Poyarkov’s News" of December 27, 2019, in which the host called Volodymyr Zelensky a "little weirdo", a "Kryvyi Rih bedwetter", and his father - stupid.