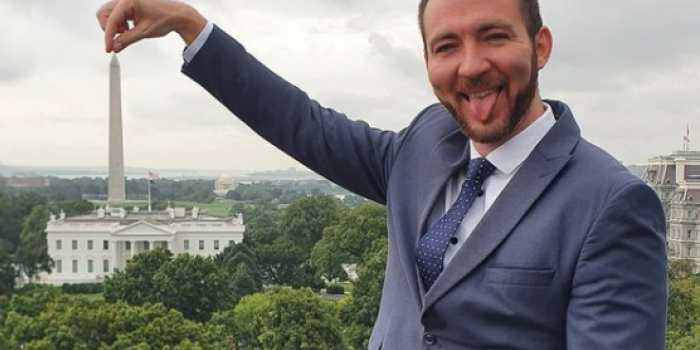 On September 1, the press secretary of the President Volodymyr Zelenskyi, Serhiy Nikiforov, posted a photo of him on Instagram in Washington. Users criticized him and left negative comments under the picture.

In the photo, Nikiforov is standing on the balcony: against the background of the White House and the Washington Monument, the spokesman stuck out his tongue and showed how he "holds" the top of the obelisk.

He also posted another photo where he is just standing against the background of the White House.

A number of users left negative comments under Nikiforov's photo. In particular, they made him ashamed and asked how old he was. "He officially represents our country. This is an awful shame and disgrace, ”wrote a user named Halyna Hnatko.

“I thought it might be shopped photo, but it isn’t. What a shame now to represent Ukraine at the highest level (((("- wrote another user named Anna Savenko.

Some have compared him to former spokeswoman Jylia Mendel: "Mendel's brother" and "We were not so ashamed even for Mendel."

Serhiy Nikiforov is currently on the trip the United States with President Volodymyr Zelensky.