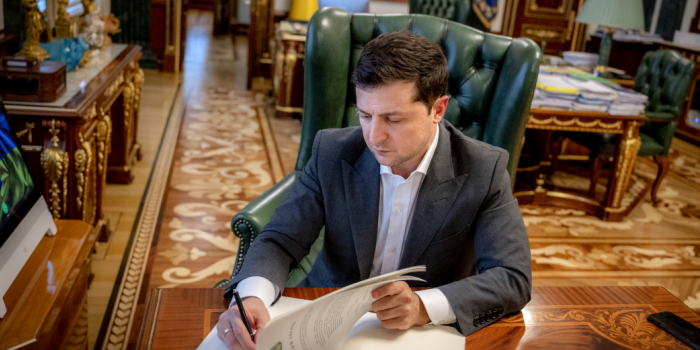 President of Ukraine Volodymyr Zelensky urgently signed the law on the prevention of threats to national security associated with the excessive influence of persons with significant economic or political weight in public life (oligarchs), the presidential press service has said, as Interfax-Ukraine reported.

As the press service said, the document was developed to fulfill the key task of public policy, namely ensuring a real transformation of the government in the interests of the whole society and implementing Ukraine's strategic course towards European and Euro-Atlantic integration.

The law provides a legal framework for separating major business from political struggle and for limiting the destructive influence of privileged interests in the economic life of Ukraine.

The document establishes clear criteria for defining oligarchs and requirements for the transparency of contacts between politicians and officials with oligarchs or their representatives. According to the law, an oligarch will be an individual who simultaneously corresponds to three of the four characteristics: participates in political life; has a significant impact on the media; is the ultimate beneficial owner of the enterprise who, after the day this law came into force, is a subject of natural monopolies or holds a monopoly position in the market; the confirmed value of the assets of the person and business entities of which he is the beneficiary exceeds 1 million living wages established for able-bodied persons on January 1 of the relevant year.

The obligation to submit a declaration of contacts with oligarchs or their representatives will apply to all officials, on whose decisions the fate of society or government decisions depends.

The law gives major business enough time to adapt and abandon the practices of the old oligarchic system. After the publication of the document, the countdown of a six-month period starts for the full introduction of its norms into force.

"There is major business in any democratic state. But no matter how big a businessman is, he must work according to the law and on an equal basis with other economic entities. If someone is used to buying politicians to allow them to circumvent the law, then even the richest will have to forget such a habit," the president said.

The law becomes invalid after ten years from the date of its entry into force.