Year 2016: summary for freedom of press in Ukraine – IMI (Updated)

This is the data of annual survey of the Institute of Mass Information «Freedom of press barometer».

Together with Crimea (31) and the occupied territories of Donbas (12), in 2016, the total number of violations of freedom of press is 307 cases. 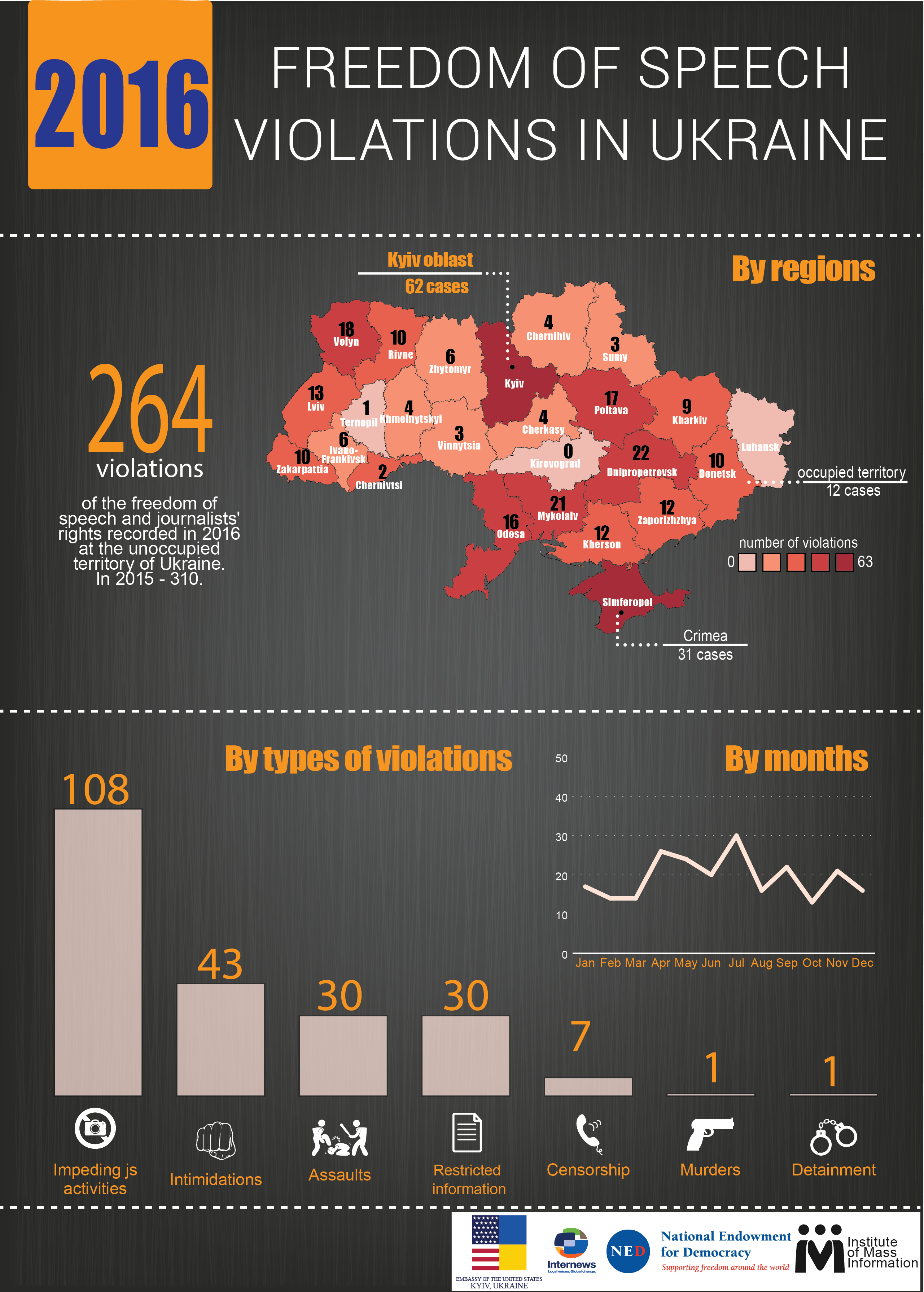 The category with the largest number of violations was impediment to lawful professional activities of journalists - 108 cases (in 2015 - 100, in 2014 - 150, in 2013 – 130 cases of impediment). The people who were impeding journalists most were individuals, law enforcement officers and local authorities.

The second place by number of cases is held by threats and intimidation of journalists - 43 cases. In 2016 this category exceeded the number of previous year cases, when IMI registered 36 cases of threats  (in 2014 - 286 cases, in 2013 – 97). The people who were threatening most were individuals and deputies from different levels.

Beatings and assaults and cases of restricting access to public information for journalists also made it into top three by the number of registered cases - 30 cases for each. In 2016, the number of cases of beatings and assaults on journalists decreased by almost a half compared to 2015 (58 cases), and almost in 10 times less than 2014 (286). The prevailing number of cases of assaults against journalists in 2016 were committed by private individuals. IMI is monitoring this tendency already two years running, unlike 2014 and 2013, when the main aggressors were representatives of law enforcement and local officials.

The number of cases of restricting access to public information for journalists draw a level with last year (33 cases), in 2014 - 14, in 2013 - 13. In 2016, as in the previous year, the access for journalists was restricted, mainly, by the bodies of local authorities.

In addition, in 2016, 1 murder of a journalist was registered (in 2015 - 2, 2014 - 7, 2013 - none) in Ukraine. In Kyiv, on July 20, Pavlo Sheremet was killed by the explosion of the car, while driving it. Police classified the event as "an intentional murder committed in a manner dangerous to the lives of many people." Investigators are probing four theories behind the murder: professional activity, hostile private relations or personal motives, Russian angle (destabilization in Ukraine) or an attempt on the life of Ukrayinska Pravda founding editor Olena Prytula.

On the occupied territories of Donetsk and Lugansk regions, given limited access to the area, IMI was able to document 12 cases of violations of freedom of speech. In particular, these are cases of blocking Ukrainian TV channels broadcast, blocking websites, publishing data about journalists on separatist data websites. Three bloggers are in "LNR" captivity - they residents of Lugansk, which militants accused of spreading "extremist materials" on so-called republics. For comparison - IMI recorded 16 cases on the occupied territories of Donbass last year.

In the Crimea annexed by Russia recorded 31 cases of freedom of press violation were registered, slightly less than last year (43 cases). Like last year, on the peninsula, Russian special services, Roskomnadzor, and occupation Crimean authorities pressured mass media. Thus, the criminal proceeding was launched by FSB against Crimean journalist Mykola Semena on the basis of Paragraph 2 of Article 280.1 of the Criminal Code of the Russian Federation – Public calls to actions aimed at violating the territorial integrity of the Russian Federation. While being questening by FSB, Semena told that "the origin of Crimea is controversial" and he "realized right to express his views" in journalistic article.

In 2016, the regions that are leaders in anti-rating of violations are the following (occupied territories are not included):