The most popular Wikipedia articles in three months of the full-scale invasion were "Russian invasion of Ukraine (2022)", the article about the adviser to the head of the Office of the President of Ukraine Oleksiy Arestovych, the one about the collective image of the 40th Tactical Aviation Brigade pilots – the Ghost of Kyiv, – and about the leader of the Ukrainian nationalist movement Stepan Bandera.

This was reported by Wikimedia Ukraine public organization, which has analyzed the online encyclopedia's viewing statistics and named the 100 most popular articles on Wikipedia's Ukrainian-language segment during the three months of the big war.

First on the list was the article "Russian invasion of Ukraine (2022)," which received almost 2.5 million views in 90 days since it had been created. Also among the most popular were the articles about the adviser to the head of the Office of the President of Ukraine Оleksiy Arestovych (1.8 million views), the leader of the Ukrainian nationalist movement Stepan Bandera (637 thousand views), and the collective image of the 40th Tactical Aviation Brigade pilots – the Ghost of Kyiv (666 thousand). 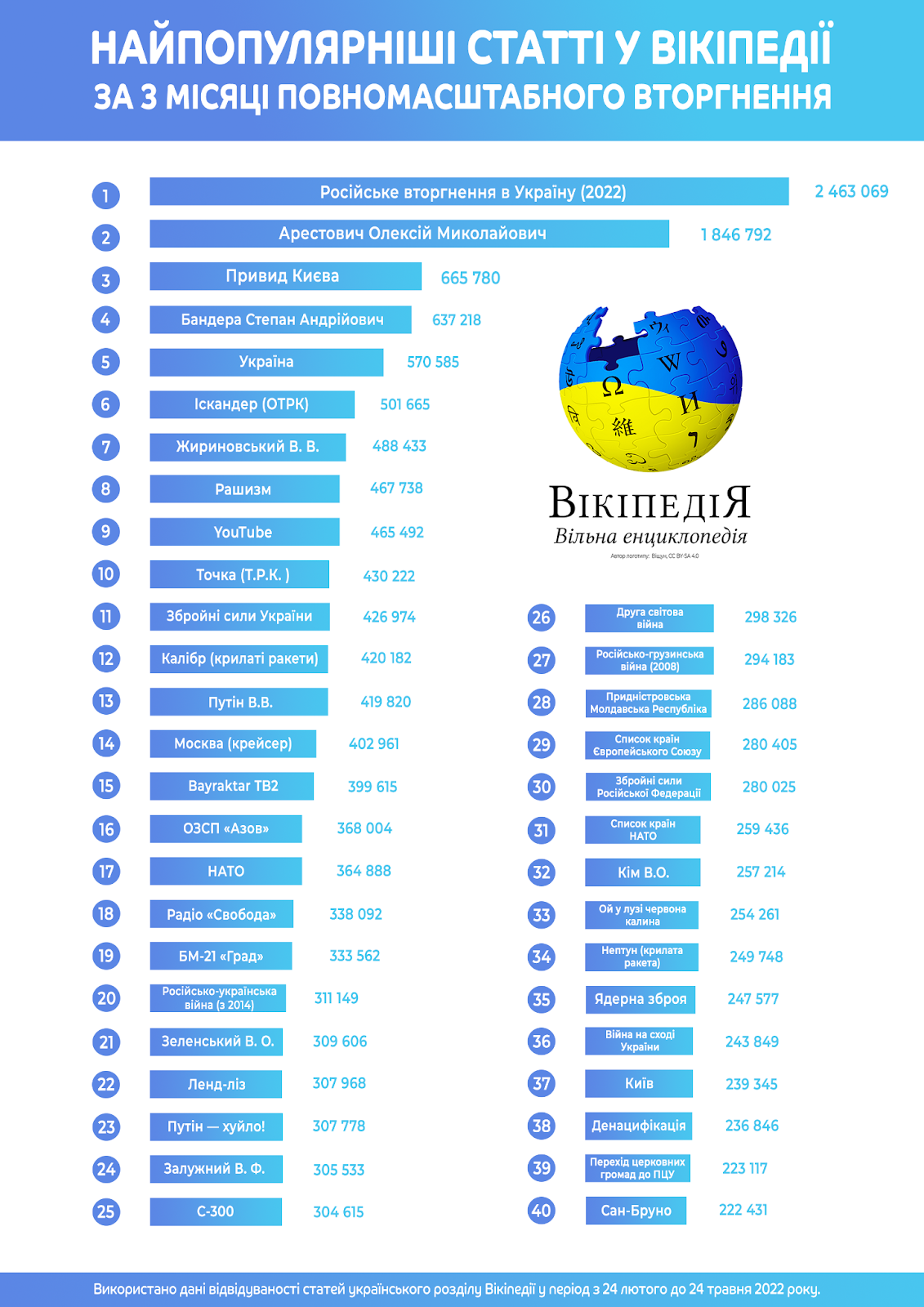 The organization notes that since the beginning of the full-scale invasion, the popularity of the Ukrainian Wikipedia as an important source of information for millions of Ukrainians has grown significantly. For the first time since May 2020, when coronavirus became widespread in Ukraine, the Ukrainian Wikipedia was visited more than 100 million times a month.

In the first 90 days after the creation of the article on the russian invasion of Ukraine, it became one of the most visited articles in the history of the Ukrainian Wikipedia segment, it was viewed almost 2.5 million times. For example, the most popular article of 2021, Ukraine, received only one million views in 12 months.

Among the famous people, the most popular ones on the Ukrainian Wikipedia were people related to the war; especially those who have become big names in popular culture. In particular, these are Ukrainian public figures Oleksiy Arestovych (1,846,000 views), Volodymyr Zelenskyy (309 thousand), Valeriy Zaluzhnyy (305 thousand) and Vitaliy Kim (257 thousand); the representatives of the aggressor state: Vladimir Zhirinovsky (488 thousand) and vladimir putin (419 thousand).

Articles about other wars in which the russian federation was the aggressor or an active conflict party also became popular: The Russian-Georgian War (294 thousand), The First Russian-Chechen War (186 thousand), and The Syrian Civil War (146 thousand).

Ukrainians traditionally used Wikipedia to learn more about topics that were actively covered in the news: the American military aid program lend-lease (307 thousand); the riflemen song "Оy u Luzi Chervona Kalyna" (254 thousand); the international interbank system SWIFT (211 thousand); the Ukrainian band Kalush (196 thousand) who won this year's Eurovision Song Contest 2022. They were also interested in the meaning and history of various terms that have often emerged in the information space: ruscism (467 thousand), denazification (236 thousand), katsap (151 thousand).

The rating's source is the information aggregated by user Base based on the primary data from the Pageviews service. The number of views from February 24 to May 24, 2022 was counted. 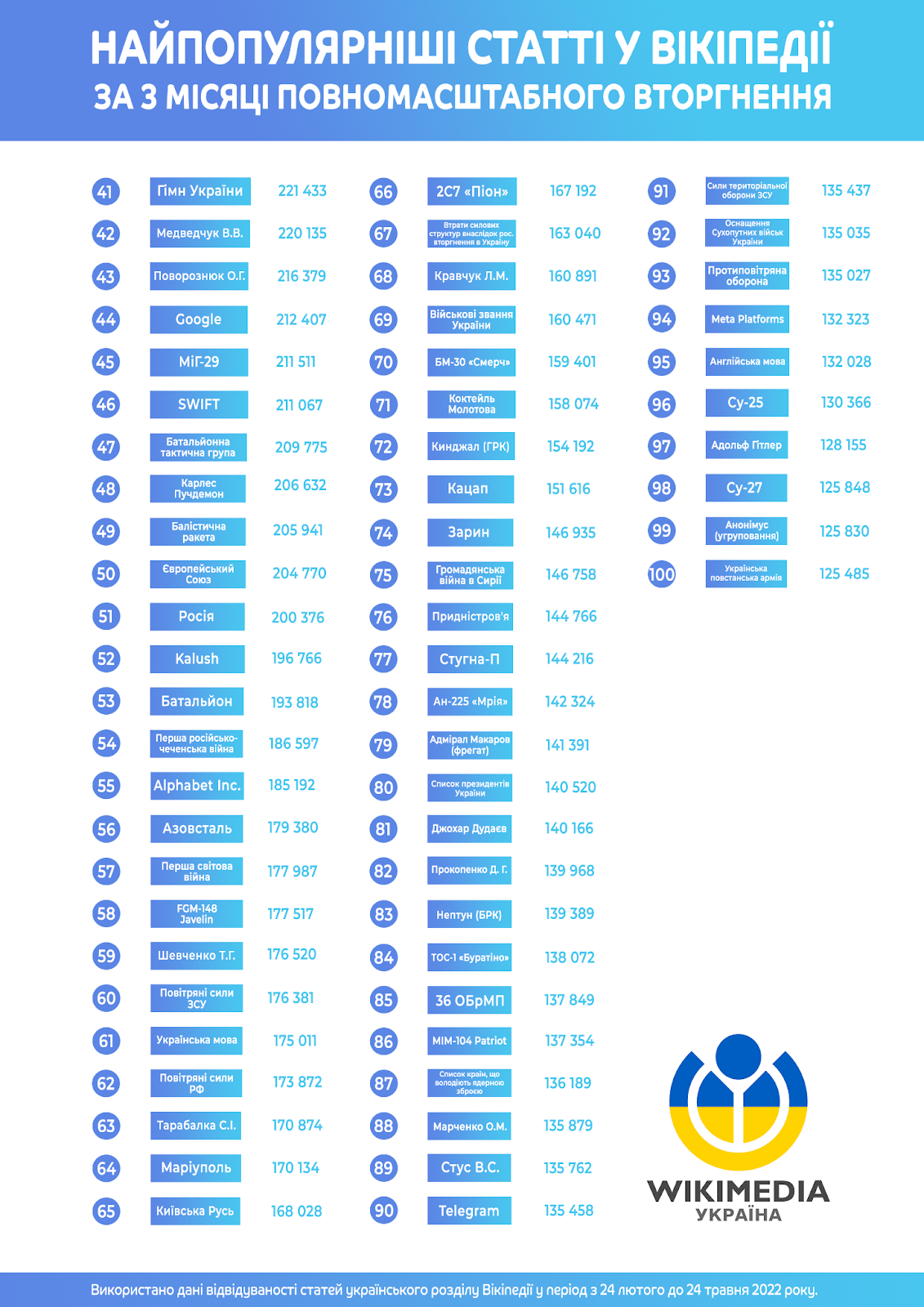