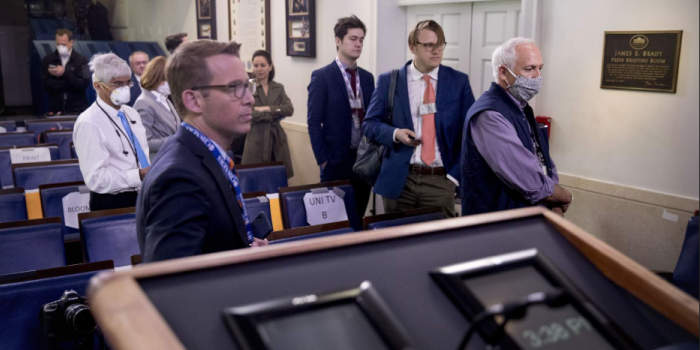 White House reporters will soon learn if they have the coronavirus when they show up to attend daily briefings with President Trump, as New York Post reported.

Journalists with so-called “hard passes” sit just feet from the commander in chief at the press conferences and are allowed to roam West Wing offices behind the podium before and after briefings to speak with press officers.

“This is happening today in light of the news yesterday that a member of the White House press corps who was at the White House on Tuesday is experiencing symptoms consistent with coronavirus.  We hope to have that individual’s test results later today,” Karl wrote.

Reporters must arrive at the White House by 3:30 p.m., or 90 minutes before the scheduled briefing time. A rapid-results test that takes 15 minutes launched last week. Trump took the new test himself.

Before the rapid results test, an uncomfortable test involving swapping deep into the sinus cavity was required, with results taking up to days with lab processing.

A release from the  White House Press Office said: “Out of an abundance of caution, the White House Medical Unit is going to conduct a COVID-19 test on all members of the press who plan to participate in today’s task force briefing, including correspondents, photographers, and technicians. These test will be conducted with absolute privacy in a vacant office within lower press.”

The reporter experiencing symptoms has not been identified. Previously, a false alarm for a White House journalist prompted the correspondents’ association to self-impose restrictions on briefing seats to reduce the potential for infections. That journalist tested negative.

Last month the White House Medical Unit began testing the temperatures of journalists who attend White House briefings. An employee of the Chinese state-owned outlet China Central Television (CGTN) had a fever on the first day of temperature tests. He was refused access to the White House, but private medical providers declined to test him for the virus, a colleague told The Post.