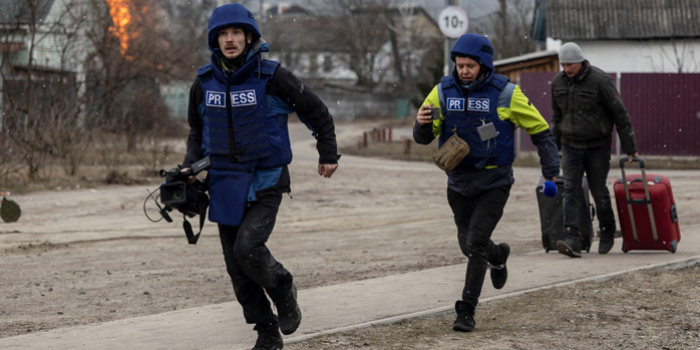 Since the beginning of russia's full-scale invasion of Ukraine, the UN has recorded the death of 17 journalists and the wounding of another 14 as a result of hostilities.

The meeting discussed the report of the UN Human Rights Monitoring Mission in Ukraine.

According to the UN, among the dead and wounded journalists, at least five are women. Among them is Vira Hyrych, an employee of Radio Liberty's Ukrainian service.

In addition, the UN monitoring mission recorded seven cases of abduction of media workers in the territories occupied by russian troops. At the beginning of March, a journalist in Kherson region was detained by the russian military, spent eight days in prison – his relatives were not told where he was, – and was later released.

The UN also confirmed that the russian army has deliberately fired at a car with journalists at least twice. The journalists were trying to leave Irpin near Kyiv in a car with a white flag and the PRESS inscription.

Since the beginning of the full-scale war, as of July 4, the UN has documented the deaths of 4,889 Ukrainian civillians, including 335 children. 8 million residents of Ukraine left their homes. The UN notes that the actual figures may be much higher: the work on documenting the victims of russian aggression continues.

At the end of June, Ukraine submitted a lawsuit to the ECtHR, accusing russia of a military invasion and attack on the civilian population.

The kremlin denies that the russian military is committing crimes against Ukrainian civilians, despite abundant evidence to the contrary.

As reported by IMI, russia has committed 413 crimes against journalists and media in Ukraine in the four months of the full-scale war. As of June 24, the russians killed a total of 33 journalists, of which eight journalists were killed in the course of their work.