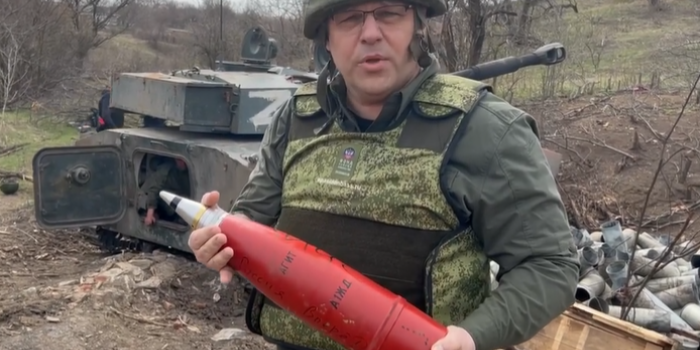 Ukraine's Honoured Artist who calls himself "the 'LPR' leader's advisor," Rodion Miroshnyk, posted a video from the frontline, filmed at an "LPR" militants' post.

In the video, Miroshnyk is holding a projectile signed "LIC" (Luhansk Information Center – Ed.). According to him, the shell contains thousands of leaflets encouraging Ukrainian troops to lay down their arms.

Miroshnyk hands the projectile over to a militant, then the sound of artillery fire is heard.

On screen, Miroshnyk begins saying that the projectile is supposed to "exp..." (probably meaning that it's going to explode – Ed.), but corrects himself and says that it is going to "open up near Popasna" and the leaflets will pour down over the Ukrainian troops' positions.

"The leaflet reads: 'You grab the leaflet, you discharge your gun, hang it over your shoulder and go over to our post, bringing the leaflet with you. You will be met and treated humanely here,'" Miroshnyk says.

Notably, in the frame you can see a man with a patch of the russian flag  – not of the "LPR" paratrooper group. Another patch worn by this man has "Z" letter on it.

Speaking of identification marks, it is unclear whom exactly Miroshnyk represents on the ground. There is no "PRESS" sign neither on his helmet nor his bulletproof vest. One can assume he is representing the illegal armed units there.

We remind that Rodion Miroshnyk is the former press secretary of Viktor Yanukovitch, a former "Partia Rehioniv" deputy in the Luhansk region council, and the former head of the Luhansk Region State Television And Radio Company.

The title "Honoured Artist of Ukraine" has been given to him in 2008 by President Viktor Yushchenko (the President's decree №979/2008 "for significant personal input in the development of Ukrainian journalism, high professionalism, and many years of diligent work."

He has been working for "LPR" since 2014, voicing anti-Ukrainian views.

In 2017, the Luhans region prosecutor's office issued an APB on Miroshnyk. He is charged with violating Article 109 p. 1 ("Actions aimed at forceful change or overthrow of the constitutional order or take-over of government"), Article 110 p. 2 ("Willful actions committed to change the territorial boundaries or national borders of Ukraine in violation of the order provided for in the Constitution of Ukraine"), and Article 258-3 p. 1 ("Participation in a terrorist organization") of the CC of Ukraine.

In 2020, the National Council on Television and Radio Broadcasting called for inspection of "Nash" TV channel and issued a warning to it specifically due to Rodion Miroshnyk's appearance on air.