The investigation into the murder of the journalist Pavlo Sheremet sent international legal orders to14 countries. Deputy Head of the National Police of Ukraine - Head of the Main Investigation Department Oleksandr Vakulenko announced this information, Radio Liberty informs.

He refused to predict the timing of completion of the investigation, noting that Ukraine is expecting answers from several countries regarding its international legal orders.

"I think, it is inappropriate and unnecessary to say what kind of order and which country received it, until we haven't got the information," - Vakulenko said.

Prominent journalists Pavlo Sheremet was killed by an explosion of the bomb planted under the car, on July 20, 2016. 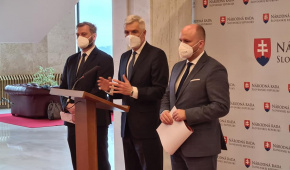 Slovakia rebuted Russia's fake news on massing troops to Ukraine because of NATO
Blogs
Sanctions against Medvedchuk’s TV channels. The first estimates
Want to learn first about the new research of the Institute of Mass Media? Subscribe to the newsletter!