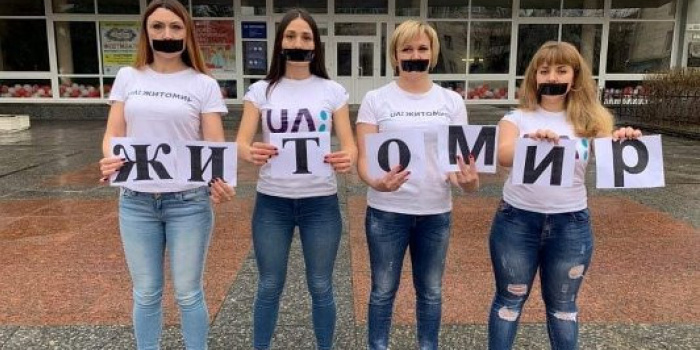 On December 12, several journalists and presenters of the morning program on the regional branch of Public Broadcaster “UA: Zhytomyr” Oksana Gebrych, Natalya Dehtiyevska, Tetyana Iskorostenko and Darya Samarina conducted barefooted protest against the closure of the morning program, as Public. Detektor Media reported.

The journalists with T-shirts with the logo of the channel UA: Zhytomyr on, came out barefooted in front of the branch office. As Oksana Hebrych told the team of the morning program was concerned about the closure of  "mornings" program after the news published on the website of  "Detector Media" saying that the NPTU branches are ceasing to air the morning programs and they would be transferred to a single city’s branch.

She explained that barefoot protest was an action of despair and an attempt to draw attention to the "morning programs" situation. According to her, today their morning program was the only platform for the region where the journalists could speak about the countrymen, the literary and artistic life of Zhytomyr region.

In December, the journalists were informed not only of closure of the morning programs, but also of staff reduction. But the directors failed to notify its staff about this measure.

“Actually, the people could be frustrated. We do not earn much to get stick to that job, but we love our job,” the journalist said, adding that no one had said them about the projects to introduce some staff changes in 2020.

The morning program on UA: Zhytomyr lasts for two hours and consists of four parts. Within the program there are some parts involving talks with the program guests where they are used to discuss interesting happenings in Zhytomyr region.

The morning team includes an editor and six journalists who also edit the stories by themselves. They work as staff personal. There are cameramen of the TV channel who film the program. There is no technical staff working for the morning program.

Oksana Hebrych said, the guests and the viewers were anxious about the closure of the “morning programs”.

“If the morning program is closed, it is of little probability they would know something about our countrymen. If they make a general morning program based on one city branch, which will cover stories about Zhytomyr region, then I don’t think that it will satisfy our viewers’ news demand,” the journalist said.

According to the board member Mykola Chernotytskyy, a survey had been conducted at the Public broadcaster, and the conclusions was that in 2018–2019 the branches offices failed to fulfill plans for morning news and entertainment and educational broadcasting.

On October 11, the head of NPTU supervising board Zurab Alasaniya informed at the press conference that the morning programs would not been produced anymore by thebranch offices, but they would be transferred to one single city.

The company later noted that in 2020, Public broadcaster would strengthen its collaboration with the regional offices to produce better content.