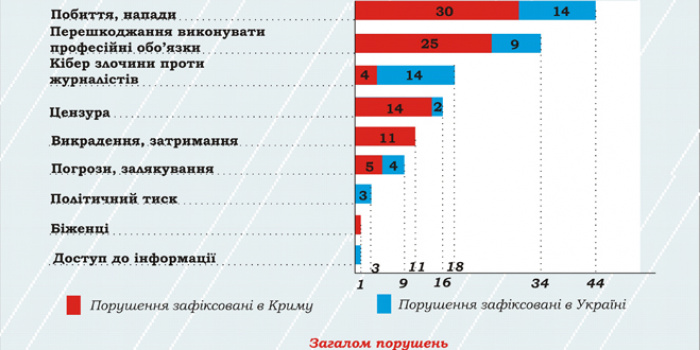 In March 2014, two-thirds of violations of press freedom in Ukraine were connected with the developments in the Crimea. These are the results of Freedom of Speech Barometer monthly monitoring by the Institute of Mass Information.

In particular, IMI recorded 11 cases of kidnapping and illegal detention of media employees in Ukraine. All of them were committed by pro-Russian militants in the Crimea.

Out of 44 attacks on journalists reported in Ukraine in March, 30 occurred in the Crimea, 8 - in the eastern regions of the country. Of the 34 cases of impeding journalist activities - 25 were related to the Crimean situation. In March, the number of attacks on media offices increased by three time and made up 12 cases (in February - 4, in January – no cases), 9 of them occurred in the Crimea, and 3 - in the eastern regions of Ukraine (Kharkiv, Donetsk and Lugansk).

In March IMI also registered 16 cases of censorship, out of them 14 took place in the Crimea. In particular, almost all Ukrainian TV channels were illegally cut off in the peninsula, and were replaced by Russian channels. Local media were also pressed – for instance, Chornomorska TRK broadcasting was cut off, and its frequency was seized by Russia 24 channel.

In general, according to the data of the Institute of Mass Information, in the first quarter of 2014, experts recorded 196 cases of beatings and attacks on journalists, which is almost twice as much as during the entire year 2013 (101 cases).

See details of the study in "Freedom of Speech Barometer" (Ukrainian) HERE.