Two photojournalists, including one from RFE/RL, jailed in Belarus after covering anti-government rally - RFE/RL 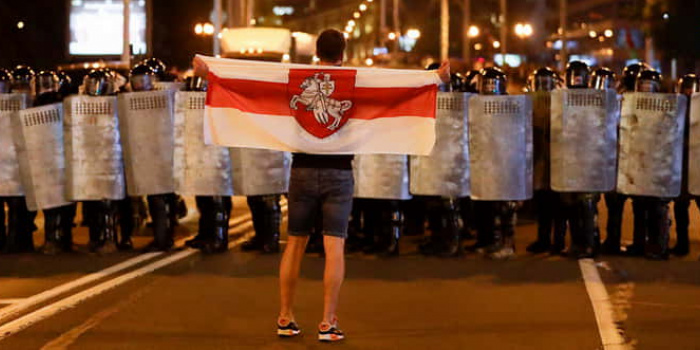 A court in Minsk has found two photojournalists -- including one from RFE/RL -- guilty of violating Belarus's law on mass gatherings and sentenced them each to 11 days in jail, as Radio Free Europe/Radio Liberyt reported.

The Frunze district court found RFE/RL photojournalist Uladz Hrydzin and another photographer, Alyaksandr Vasyukovich, guilty during a trial on September 16. A third man, their friend Yahor Kalyahin, was fined 540 rubles ($210) on the same charge.

The three were detained in a Minsk bar by a group of people wearing balaclavas on September 13, the day when tens of thousands rallied in the Belarusian capital to protest against official results from an August 9 presidential election that handed a landslide victory to the incumbent, Alyaksandr Lukashenka.

The Interior Ministry reported more than 400 arrests on that day.

"These sentences are the latest examples of the Belarusian government’s ongoing assault on independent journalism -- and a clear attempt to silence reporters telling the truth about Belarus's deeply flawed elections and the brutal crackdown on citizens that the world has been witnessing for weeks," she added.

Hrydzin, who was recently stripped of foreign-media accreditation, was detained just before he sent photos of the protest to RFE/RL.

The protesters and opposition leaders say the election was rigged. Lukashenka, who took just over 80 percent of the ballots according to official results, denies any fraud.

Since the vote, thousands of people have been detained and beaten by police, while nearly all the opposition's key leaders have been forced to leave the country or been arrested in a widening crackdown condemned by the United States and the European Union.

The crackdown includes stifling the media.

On September 4, six Belarusian journalists were sentenced to three days in jail after being detained while covering an anti-government protest in Minsk.

Belarusian authorities have stripped accreditations from at least 17 journalists from major foreign news organizations -- including five from RFE/RL or its affiliates -- who have been covering the country’s turmoil.