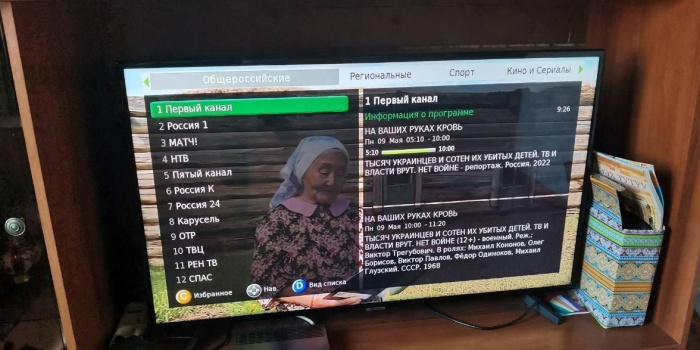 In russia, on the night and morning of May 9, in the Smart TV descriptions of channels and shows read, "The blood of thousands of Ukrainians is on your hands," according to Mediazona.

"The blood of thousands of Ukrainians and hundreds of their murdered children is on your hands. The TV and the government are lying. No to war," reads the message to the users.

The caption was broadcast, in particular, in the announcements and descriptions of the Pervyy Channel, russia 1, MTS TV, NTV-Plus, Rostelecom, as well as in the Winx media player.

Some speculate that the built-in player of Smart TVs has been hacked.

In addition, this caption has been noticed in the descriptions of "Yandex.Teleprogramma" service. By the time of publication, it was removed.

The newspaper also writes that on May 9, russian video hosting RuTube reported on its Telegram channel that it had suffered a "powerful cyber attack." The service's website is not available, its representatives promised to tell when it will be restored shortly.