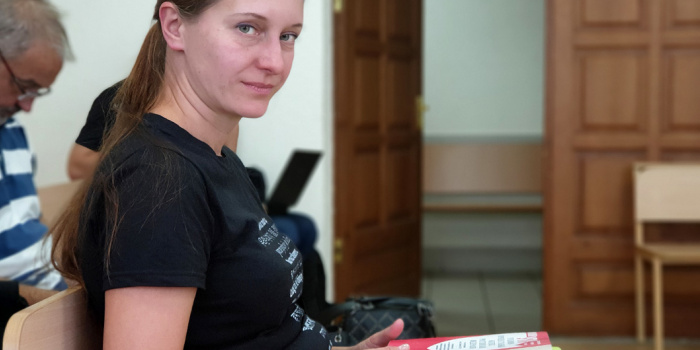 Journalist Svetlana Prokopyeva’s criminal case is back in session. On June 16, a court in Pskov heard preliminary arguments against the reporter, who is accused of “justifying terrorism” in written comments about a suicide bomber who attacked federal agents in Arkhangelsk in October 2018. Prokopyeva now faces up to seven years in prison for her remarks, as Meduza reported.

Regional state investigators launched the criminal investigation against Prokopyeva in February 2019. Over the past year, “investigators have filed six expert examinations in relation to her case, added Prokopyeva to a federal list of terrorists and extremists, frozen her bank account, and banned her from leaving the Pskov region,” reports Sever.Realii (a branch of RFE/RL, where Prokopyeva has worked as a journalist for Radio Svoboda).

According to Sever.Realii, Prokopyeva’s hearing was well-attended, despite the quarantine restrictions in place due to the ongoing coronavirus pandemic.

Both Prokopyeva and her lawyer denied the accusations against her, claiming that the prosecutors failed to identify any specific statements where she “justified terrorism.”

“Everyone understands that the case is fabricated,” Vladimir Zhilinsky (the local coordinator of the “Golos” human rights movement) told Sever.Realii. “[Svetlana] is being tried for doing her journalistic work. There was no justification of terrorism there.”

Prokopyeva is being prosecuted for suggesting in an article about a suicide bombing against an FSB office in Arkhangelsk that the 17-year-old attacker may have been retaliating against police brutality and repression. (Before the bombing, the young man reportedly wrote in a Telegram channel that he was avenging the FSB’s “fabricated cases and torture of people.”)

Both Human Rights Watch and the Committee to Protect Journalists have called on the Russian authorities to drop the charges against Prokopyeva.