Three journalists come under russian fire near a bridge to Severodonetsk. One injured 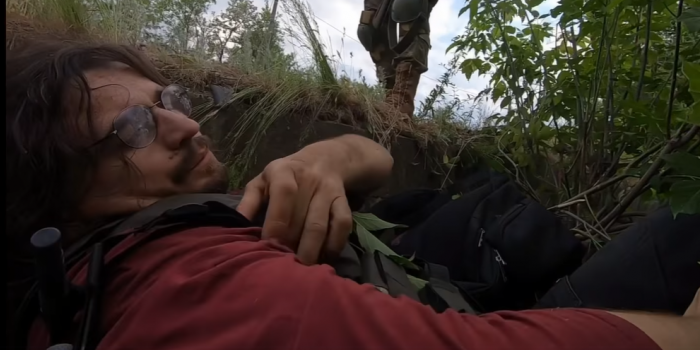 Two foreign journalists and Ukrainian filmmaker Mykola Pastukh came under russian fire on May 28 near the bridge to Severodonetsk (Luhansk region). As a result of the shelling, Mykola Pastukh received a shrapnel wound to his right arm, and one of the journalists was injured.

Mykola Pastukh told IMI about this.

According to Mykola, he was working with foreign journalists Kaoru Ng (Hong Kong / UK) and Alex Chan Tsz Yuk (UK). Mykola was also filming a documentary about the work of foreign media at the frontline.

Journalists planned to cross the bridge to Severodonetsk and tried to find out if it was safe. At that time, the Ukrainian military approached them and warned of possible shelling. The shelling began just as they were talking to the military.

As a result of the shelling, Mykola was wounded, and Alex Chan Tsz Yuk was injured.

"It hit just as we decided to go back. A mine fell six or seven meters away from me. I received a severe shrapnel wound. I was wearing a bulletproof vest and a helmet. However, the explosion blew my helmet off. Everyone had medical tourniquets, but they could not be applied to the part where I was wounded, because it was too high," Mykola Pastukh said.

Mykola is currently in hospital in Lviv, awaiting surgery.