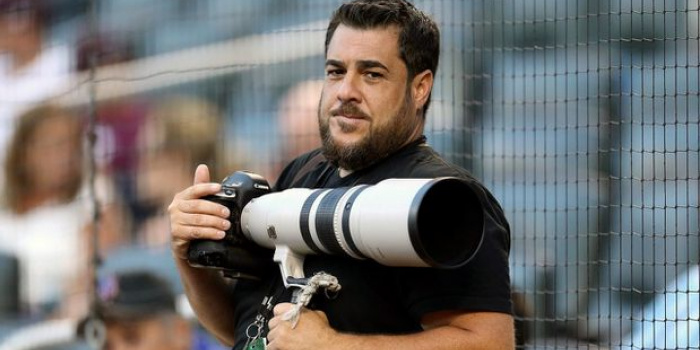 Anthony Causi, a longtime photographer for The Post whose prolific talent and larger-than-life personality made him a beloved and respected figure throughout the New York sports world, died Sunday from the coronavirus at North Shore University Hospital. He was 48, as The New York Post reported..

Causi is survived by his wife, Romina, and their children John, 5, and Mia, 2, as well as his parents, Lucille and John Causi, and sisters Maria Marangelli and Dianna Marotto.

“Anthony Causi was our colleague, our friend, and a brilliant journalist,” said Stephen Lynch, editor in chief of the newspaper. “He was, quite simply, one of the best sports photographers in New York City, capturing all the major moments of the past 25 years. Soft-spoken, funny, but most of all kind — he was respected by those he photographed and admired by those with whom he worked.

“The Post that you read, and the newsroom that we work in, are less colorful today because of his absence. Our hearts go out to his family, and we share their grief.”

A Brooklyn native who grew up in the borough’s Bensonhurst neighborhood, Causi joined The Post in 1994 as a photo messenger, graduated to photo editor and eventually became a full-time journalist photographer, which he called the attainment of a dream. In that role, he chronicled the highs and lows of the Yankees, Mets, Giants, Jets, Knicks, Rangers and more for The Post.

His action shots reflected his knack for being in the right place at the right time — his capturing of legendary Yankees pitcher Mariano Rivera from behind, departing the bullpen and entering a sold-out Yankee Stadium, became his most popular photo — and his portraits of some of those same athletes off the field showed off the plethora of relationships he developed. In 2017, mercurial Mets All-Star Yoenis Cespedes granted The Post access to his ranch in Vero Beach, Fla. — and dressed in cowboy gear — because of the trust he had in Causi.

“Anthony was a great, funny and awesome guy to talk to and learn from about sports photography,” tweeted Phillies shortstop Didi Gregorius, who got to know Causi while with the Yankees.

Causi, Major League Baseball said in a statement, “brought out the best in the players and the people of our National Pastime.” Giants senior vice president of communications Pat Hanlon echoed that in a tweet, writing that Causi “captured the images that painted the portrait of New York sports.”

A graduate of Brooklyn’s Lafayette High School and Pace University, Causi prided himself on his people skills and his out-of-the-box thinking. His Twitter page biography concluded with words of wisdom from Mark Twain: “You can’t depend on your eyes if your imagination is out of focus.”

“He was a charismatic photographer who brought fans closer to the action with his breathtaking images of the Mets,” Mets COO Jeff Wilpon said in a statement. “More importantly, he was a friend to so many of us through his numerous spring trainings in Port St. Lucie as well as being a fixture at Citi Field.”

Similarly, the Knicks called Causi “a fixture at the Garden and one of the best photographers in the business.”

While Causi left Brooklyn for Long Island as he started a family, Brooklyn never fully left him.

“He was a New Yorker,” said Jason Zillo, the Yankees’ vice president of communications and media relations. “Anthony was passionate, he grinded, he cared and was caring, and he wore his heart on his sleeve. And it was a huge heart. I don’t know how it fit on his sleeve. People gravitated towards him, but he had an edge to him and he never wanted to have the second-best photo of the day.”

Balancing that edge, bolstering that heart, was an innate generosity that Causi expressed most regularly with his work tools. Without prompting or requests, he typically took photos of co-workers and competitors in addition to his work subjects, offering them to folks for their personal collections. Causi’s uncle Joe Causi, an on-air personality for WCBS-FM Radio, said his nephew would often take photos pro bono at area Little League events.

“Anthony was kind, thoughtful and one of the best at what he did,” the Rangers said in a statement.

Causi’s nephew Mario Lilla wrote on Instagram that his uncle was “literally a 48-year-old stuck inside an 18-year-old.”

The outpouring of sentiment upon Sunday’s news spoke to Causi’s vast impact on his profession, across the many sports fields where he worked.

“Anthony was an incredible photographer and human,” the Red Bulls said in a statement.

“New York baseball won’t be the same without him in the photo pit,” former Yankees and Mets outfielder Curtis Granderson tweeted.

“What a great man. So sorry to hear,” tweeted Rangers infielder Todd Frazier, who spent time with both the Yankees and Mets. “God found his angel photographer, that’s for sure.”