The largest share of information in local mass media of the South and East of Ukraine is about crimes, and the smallest – about combating corruption: IMI survey

For the context, according to the data of the sociological surveys GfK Ukraine conducted in 2016, residents of Southern and Eastern regions needed most the information about fight against corruption at the local level. As the IMI’s research data shows, local media outlets of the South and East of Ukraine do not satisfy this need.

The largest share of materials about crime, traffic accidents, accidents etc. was observed in media outlets of Kharkiv and Odesa – on average, 21% from the total number of materials, or one in every five news items, and the smallest — in media outlets of Severodonetsk – 11%. What is noteworthy is that this topic is covered most extensively in online media outlets – almost one in every three news items (27%), while TV news and press address these issues in 16% of all materials.

Such socially important topics like health care and education appear in regional media outlets, respectively, in 5 and 3% of materials. The smallest share of information about these topics was found in media outlets of Mykolayiv, Zaporizhzhia, and Odesa.

Besides, according to the IMI data, during the last year the number of materials about the ATO zone in regional media outlets went down (4% of materials on this topic as of February of 2017, compared to 6.5% as of February of 2016). In them, there is virtually no information about the occupied areas — Crimea and separate rayons of Donetska and Luhanska oblasts. Ukrainian regional media outlets also offer no information about Russia; seldom materials on this topic would appear only in media outlets in Donetska and Mykolayivska oblast.

Conflict-affected groups of population* are on average the topic of 2% of information. They are almost never mentioned in media outlets of Kharkiv, Odesa, Mykolayiv, and Severodonetsk .

Research showed that local media outlets do write a lot about local politics — on average, this topic is addressed in about 14% of the news. The largest share of information on this topic is dedicated in mass media in Severodonetsk (31%) and Zaporizhzhia – 21% of materials. However, it should be pointed out that a significant share of such materials is political dzhynsa (covertly commissioned materials) of local politicians and the so-called “no-legwork materials” (materials mostly based on official press releases from governmental institutions and local authorities).

Economy and news about activities of companies on average were addressed in 7% of materials in regional media outlets under observation. The largest share – 13% was observed in Kherson, and the lowest share – 3% in Mykolayiv. 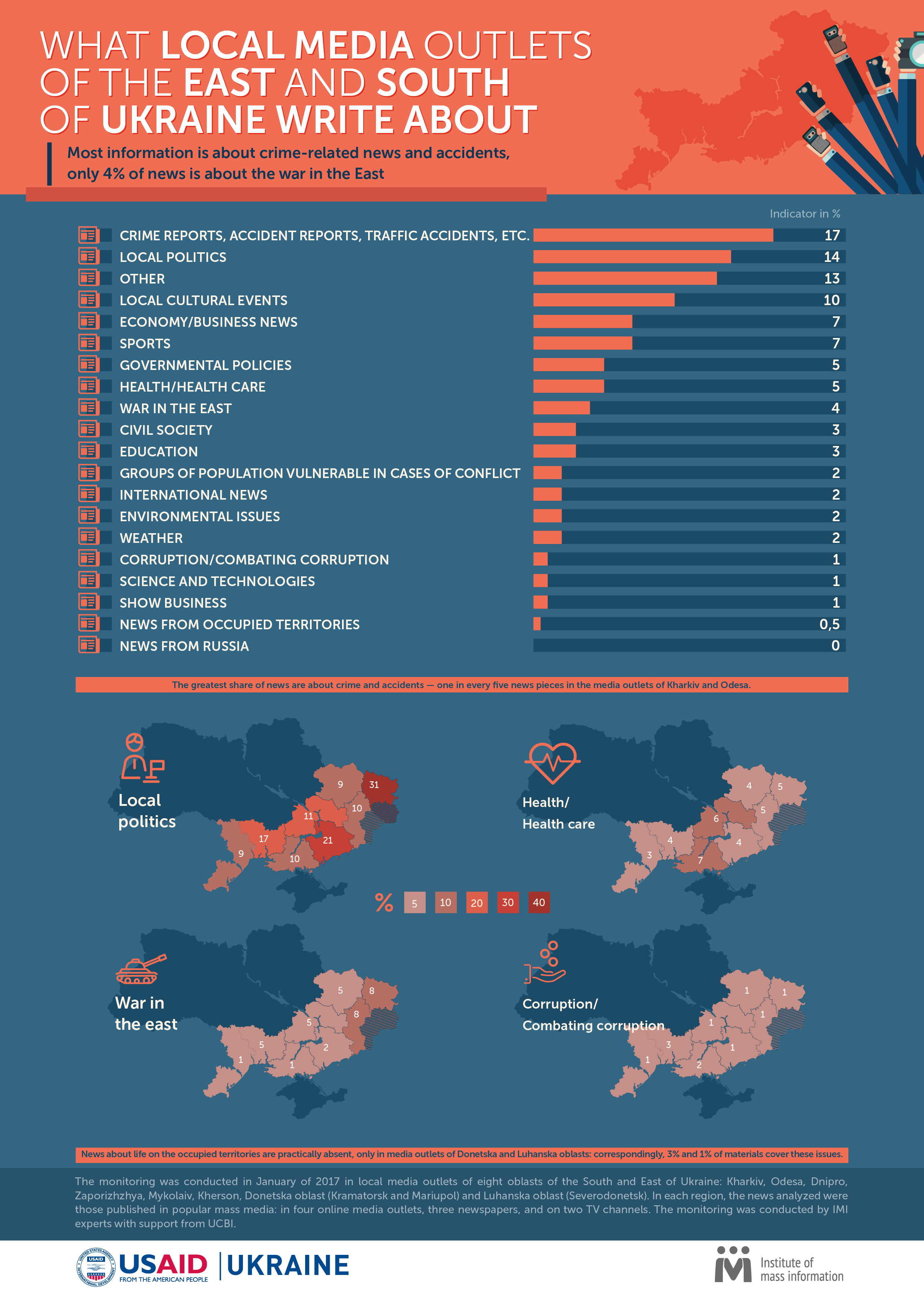 Monitoring was conducted by the experts of the Institute of Mass Information with the support from the Ukrainian Confidence Building Initiative (UCBI), which is funded by the United States Agency for International Development (USAID). The monitoring covered local media outlets of Kharkiv, Odesa, Dnipro, Zaporizhzhia, Mykolayiv, Kherson, Donetska oblast (Kramatorsk and Mariupol) and Luhanska oblast (Severodonetsk), during January-February of 2017. In every oblast, IMI experts analyzed news in three printed media outlets, four popular online media outlets and two TV channels. In total, the experts processed 2,612 materials of printed media outlets, 4,692 materials from online media outlets, and 650 TV materials.

* Conflict-affected groups of population are the categories of the Ukrainian society that were affected by or are involved in the conflict in the East of Ukraine, occupation of Crimea and its consequences: the military currently serving in the ATO zone, ATO veterans and their families, children of the war, internally displaced persons, residents of the occupied territories and the territories along the front line, the other side of the conflict, volunteers.