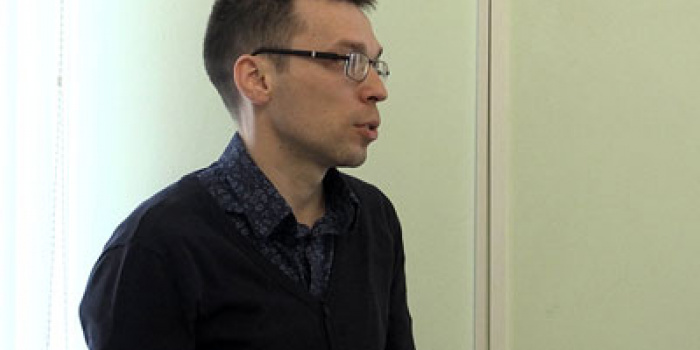 The Korolivsky District Court in Zhytomyr has ruled to take the journalist suspected of high treason Vasyly Muravitsky under night home arrest instead of round-the-clock one, as Ukrinform reported.

The prosecutor Vadym Levchenko insisted on changing the pre-trial detention measure to detention in custody with an option to post a bail of UAH 570 thousand ($23 thousand).

Instead, Muravitsky's lawyer Svitlana Novitska filed a motion not to impose any pre-trial detention measure to her client.

Since June 2018, Muravitsky has been under 24-hour house arrest. Earlier, he had been in custody. House arrest at night will continue from 10 pm to 6 am. The preventive measure is to be in force until January 27, 2020.

IMI reported, on August 2019, the judge of Korolivsky district court in Zhytomyr ruled to extend home arrest to the journalist Vasyl Muravytsky. "The court ruled to extend measure of restriction in form of 24 hours a day home arrest with a prohibition to leave the residence. The term of home arrest is 60 days, thus until October 12, 2019”, the ruling reads. The public prosecutor Vadym Levchenko filed a motion asking to take Muravystsky in custody, as the suspect could flee or go on writing anti-Ukrainian materials.

Vasyl Muravytsky is charged with high treason, he had been arrested in August 2017. Since 2014 he published several anti-Ukrainian materials and commented developments in Ukraine for pro-Russian mass media. The blogger is charged with crimes stipulated by the article 111, paragraph 1 (“High treason”), article 110, paragraph 2 (Attempt against territorial integrity of Ukraine”), article 161, paragraph 2 (Violation of equity of citizens depending on their racial, ethnical identity) and article 258-3, paragraph 1 (“Involvement in terrorist organization activity”) of the Criminal code of Ukraine. On June 28, 2018, the judges placed Muravytsky under home arrest. As IMI informed earlier, January 10, 2019, the Korolyovsky district court in Zhytomyr extended the measure of restriction till March 10th.