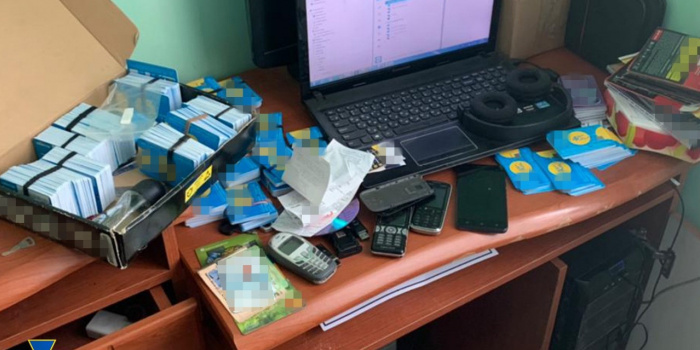 The Security Service of Ukraine issued a suspicion notice to a bot farm organizer in Prykarpattia. The bot farm was being actively used by a large russian Internet platform.

The special service's cyber ​​specialists had eliminated this bot farm in Ivano-Frankivsk oblast back in 2021. The offender used almost 11,000 cards from a Ukrainian mobile operator to create fake accounts.

The "capabilities" of this bot farm were being actively used by a large russian Internet platform that illegally rents out other people's phone numbers. This could be used to create thousands of fake accounts on social media, messengers, and video hosting platforms. The fake accounts caused a large-scale distortion of the media space, "bumping up" views, likes, and comments. In this way, public consciousness was being swayed, in particular, in favour of the enemy's propaganda," the report says.

According to the investigation, the suspect initiated contact with the russians through a special Telegram channel and agreed on the terms of cooperation and payment. After that, he received detailed instructions on how to start the bot farm. Representatives of the russian federation gave him access to the software, and the attacker purchased the technical equipment for the bot farm's operations himself.

The examination testified that the suspect used SIM boxes, which allowed him to quickly switch between SIM cards and international mobile equipment identifiers (IMEI) in order to hide his illegal activities and avoid being blocked by the operator.

The bot farm organizer has been notified of suspicion under Part 2 of Article 361 (unauthorized interference in the work of automated systems of electronic communications which led to leaks of information, disruption of its processing, and violation of the established order of its routing, which caused significant damage) of the Criminal Code Code of Ukraine.