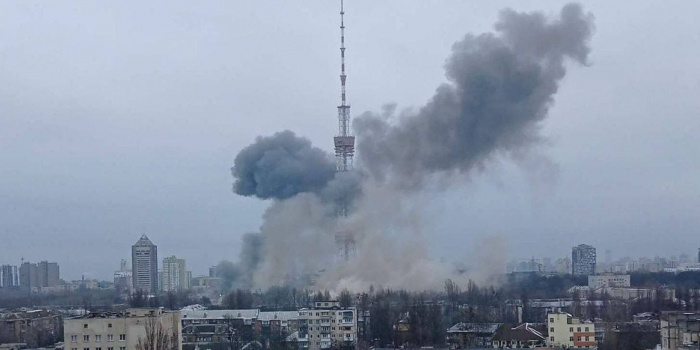 Russian troops struck at the Kyiv TV tower at 6.00 p.m. This was reported by Suspilne and eyewitnesses on social networks.

The president Volodymyr Zelensky drew a parallel between fascists killing 33 771 jewish people in Babin Yar in Kyiv in 1941 and Russian military bombing today the TV tower situated just near Babin Yar in Kyiv. "Why repeat "Never again" for 80 years long, if when the bomb falls on Babyn Yar, the world remains silent? 5 more lives are lost. History repeats itself ..."

"The occupiers hit the broadcaster's hardware on the TV tower. The telecast may be suspended for a short time. In the near future, the backup broadcasting of some channels will be switched on.

You can now follow the radio stations. The RADA channel is also available on YouTube, ”the Center for Strategic Communications said.

"Currently, you can watch Ukrainian television on the regional Multiplex MX-5. We ask citizens to use the search for channels on their TV to gain access to regional channels," - added in the State Special Service.

To remind, the Institute of Mass Information starts monitoring and recording facts about Russia's crimes against journalists and the media since the February 24 attack on Ukraine..