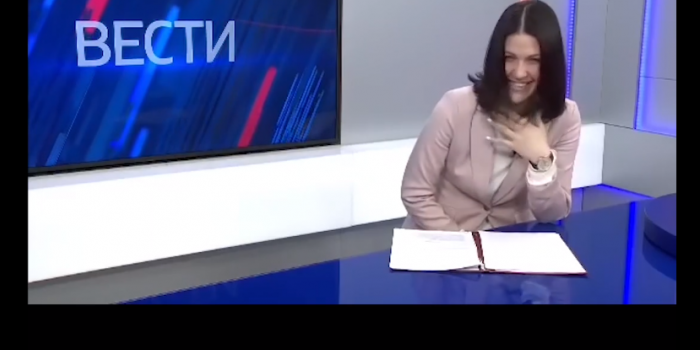 Photo credit: Screenshot from the video of Nastoyashchee Vremya

A presenter on Russian state TV lit up the Internet after she broke into a lengthy fit of laughter while attempting to inform viewers of an increase in government subsidies to underprivileged people, a response that was apparently triggered by the notion that the amounts involved were ridiculously small, as Radio Free Europe/Radio Liberty reported.

Vesti Kamchatka's Aleksandra Novikova could not contain herself while reading the report on a benefits hike that would provide disabled people, war veterans, victims of radiation exposure, and others with an increase that would bring one category of social payments to 1,500 rubles ($23) -- of which 900 could be used for medicines, 137 toward a health resort, and the rest (363 rubles, or $5.60) for "international" transportation to such a resort.

After reading much of the news item in a relatively even tone, Novikova lost it as she mentioned the international travel costs, laughing heartily for more than a minute despite attempts to catch her breath and regain her composure.

"I tried, you heard," she says apologetically at one point, later adding, "Good thing I'm not live."

The clip was apparently not broadcast live on television or online. But it did attract a lot of attention on social media after it was published by the news website Info24.

In a post on the Telegram channel Rovegosteb, blogger Andrei Yegorov predicted that Novikova would be fired. He also called the introduction of such benefits a "mockery," suggested that she may have been set up, and asked whether she was laughing through tears.

Project Scanner, which aims to expose crimes conducted by security agencies, sympathized with the plight of bearers of sad news, writing sarcastically that "the government laughs the same way when providing such huge sums."

The radio station Govorit Moskva, citing an anonymous source, reported that multiple people stood to be punished. "They will find out who leaked it, and the whole team will be fired," the source was quoted as saying. "In addition to dismissal, they will block all their paths. They won't be able to find work."

The deputy head of regional departments for the main state broadcaster, the All-Russia State Television and Broadcasting Company (VGTRK), which operates Vesti Kamchatka, hung up when contacted for comment by RFE/RL.

The additional perks are part of a recent 3 percent increase in social benefits introduced on February 1 that will affect more than 15 million people, according to Lenta.ru.

The hike comes after a January 15 state-of-the-nation address in which President Vladimir Putin promised increases in pensions and other government payments. Putin, whose approval ratings have decreased during his current term, demanded the government "produce tangible results in attaining worthy living standards that would be clearly perceived by the people."