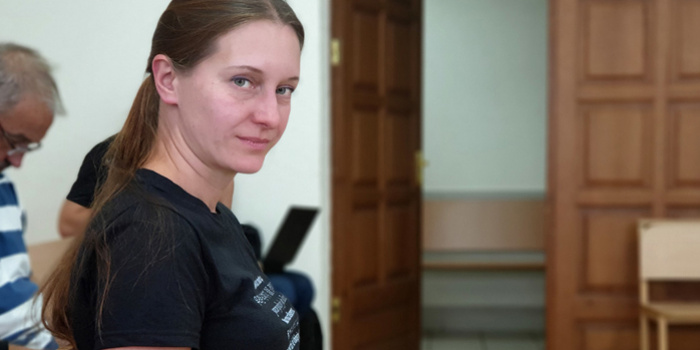 The RBC daily reported on October 2 that the Kremlin advisory body noted in its statement that a Russian NGO, which provides expert examinations of legal cases, had determined that Prokopyeva's article for Ekho Moskvy's Pskov affiliate did not warrant the charges against her.

Prokopyeva's case has drawn criticism from rights and media watchdogs, with dozens of outlets, including RFE/RL, recently publishing an open letter in which the journalist described the charges against her as "the murder of freedom of speech."

The charges stem from a November 2018 article that Prokopyeva, a prominent local journalist who is a freelance contributor to RFE/RL's Russian Service, wrote and read on air for her regular contribution to Ekho Moskvy In Pskov's "Minute Of Enlightenment" program.

Analyzing the suicide bombing of a Federal Security Service (FSB) office in Arkhangelsk the week prior, Prokopyeva noted restrictions on activism in Russia and lamented that the 17-year-old who carried out the attack felt he had to resort to violence to make his point to the authorities.

Just before the bombing, the youth reportedly posted on social media that he was carrying out the attack to protest alleged FSB falsification of criminal cases. Three FSB officers were injured in the bombing.

Referring to Russia's "brutal law enforcement system," Prokopyeva commented in her article that "the apple never falls far from the tree."

In February, police raided Prokopyeva's Pskov home as well as the office of the local Ekho Moskvy affiliate, drawing criticism from rights groups.

Ekho Moskvy, along with a local news feed, received heavy fines for publishing the article, which both subsequently took down. Prokopyeva was detained and released, but was later placed under court supervision, her bank accounts frozen, and her passport confiscated.

In August, Prokopyeva filed a complaint with the European Court of Human Rights over the seizure of equipment and documents from her home.

In September, she was formally charged with the "public justification of terrorism" -- a charge punishable by five to seven years in prison, a fine of up to 1 million rubles ($15,300), and the denial of the right to work in her profession for up to five years.

In her October 1 letter, Prokopyev denied the charges against her, describing them as "simple revenge" on the part of Russia's security agencies.

"I analyzed the reasons for a terrorist attack. I tried to understand why a young man, who should want to live, decided to commit this crime and suicide," she wrote.

A petition in her defense has been launched on Change.org and numerous media watchdogs, including Reporters Without Borders and the Committee to Protect Journalists, have criticized the case against her.

The case has also caught the eye of Russian politicians.

Lev Shlosberg, a Pskov lawmaker and head of the local Yabloko party branch, has accused the state of conducting "political terror" in pursuing criminal charges against Prokopyeva, saying that he was "confident in her complete innocence."

On October 3, Shlosberg wrote on his Telegram feed that he had been called in for questioning by the investigator of Prokoyev's case, whom he named as Aleksei Nazarenko.

"I can only note that this need arose suddenly after the day of solidarity with Svetlana," he wrote, adding that he planned to be at the Investigative Committee's regional Pskov office early on the morning of October 7.